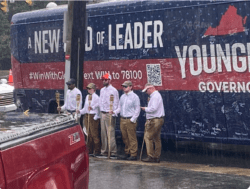 The slimy attempted hit against Virginia gubernatorial candidate Glenn Youngkin appears to have been perpetrated by operatives in the Democratic Party of Virginia and Young Virginia Democrats.

Internet sleuths believe they have discovered the identities of some of the people that hoped to tar Youngkin’s campaign with racism by pretending to be white supremacists.

The only people that bought this obviously staged dumpster fire were the liberal media and Democrat party operatives. Skeptics went to work to figure out who these people are – and it appears that they have succeeded.

First up, the financial director for Young Virginia Democrats, Camden Layton, who after being outed changed all of his social media accounts to private.

Next up, Colleen Wachenfeld:

Colleen is a “tracker/researcher” for the Democratic Party of Virginia, according to her now-deleted LinkedIn page.

It will be nearly impossible for these two to deny their involvement after taking such drastic action as to hide or delete social profiles that would be very valuable to career political operatives.

The Virginia Democratic Party issued a statement Friday hoping to sidestep the mess this will surely become for them and their “partners and affiliates.”

Also of note is that The Lincoln Project issued a statement taking responsibility for the stunt. The whole admission felt like it was intended to take heat off the Virginia Democratic Party (and its partners and affiliates), but that’s not going to happen as the participants in this faux-pas continue to get outed.

Content created by Conservative Daily News and some content syndicated through CDN is available for re-publication without charge under the Creative Commons license. Visit our syndication page for details and requirements.