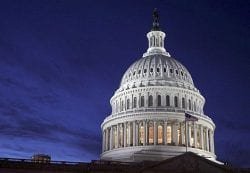 Following the Jan. 6 Capitol riots, the Capitol Police adopted a new policy to dig into the social media feeds of individuals meeting members of Congress, Politico reported, citing three people familiar with the matter as well as internal Capitol Police documents and communications. Targets of the surveillance included congressional staffers as well as lawmakers’ constituents, donors and associates.

Julie Farnam, acting director of intelligence for the Capitol Police and former Department of Homeland Security official, directed analysts to run “background checks” on donors and associates of lawmakers, including instructions to “list and search all political opponents to see if they or their followers intend to attend or disrupt the event,” according to documents reviewed by Politico.

Analysts also examined real estate records of donors with whom lawmakers were meeting, including donors of Florida Republican Sen. Rick Scott, who called the practice “incredibly disturbing,” according to Politico.

“It is unthinkable that any government entity would conduct secret investigations to build political dossiers on private Americans,” his office told Politico. “The American people deserve to know what Chuck Schumer and Nancy Pelosi knew and directed, and when. Senator Scott believes the Senate Rules Committee should immediately investigate.”

Several analysts were so alarmed by the practice they raised concerns with the agency’s inspector general, Politico reported. News of the practice also riled lawmakers, including North Dakota Republican Rep. Kelly Armstrong, who said the practice constituted “spying” on lawmakers, staffers and constituents.

“Anybody involved with implementing this without making it known to the actual members of Congress should resign or be fired immediately,” Armstrong said. “And I’m not big on calling for resignations.”

The Capitol Police did not respond to the Daily Caller News Foundation’s request for comment.

A department spokesperson told Politico that the practice was justified as “the more public information we have, the better we can understand what kind and how much security is necessary.”

“It is our duty to protect Members of Congress wherever they are,” the spokesperson added. “Just like journalists, we do research with public information.”

“When police set out to monitor people’s social media activity without any reason to believe they have engaged in criminal activity, it raises First Amendment concerns,” he said. “Those concerns are especially strong here, where individuals are coming under scrutiny simply because they are exercising their right to petition members of Congress.”