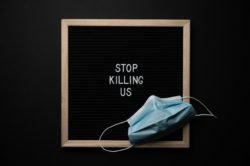 There are now hundreds, if not thousands, of organizations, politicians, international bodies, world governments, scientists, health-care experts, and just your average citizen clamoring for the vaccine manufacturers to cough up (bad choice of words) their VAERS data. Tearing a page from Fauci’s playbook, Big Pharma just keeps stonewalling such requests, and it’s pretty evident that they do not ever intend to release such data, or at least data that hasn’t been laundered and overhauled. Even then, I don’t think it will happen. Big Pharma, like Fauci, isn’t about to acquiesce to the demands of insignificant people.

I’ve witnessed so many people doing bad things during this time—George Soros, Bill Gates, Bill de Blasio, Andrew Cuomo, and little tony fauci. I remarked to my husband recently that it speaks volumes about how lousy a job our health-care “experts” have done when we have to tune in to Dr. John Campbell’s daily updates from the U.K., updates from a Dr. Been here in the U.S., and YouTube videos of John McCullough, Pierre Kory, and Robert Malone, if they haven’t been X-rated by the nameless, faceless, and mostly clueless fact-checkers and expunged from public viewing out of an excess of caution that we might actually learn something worthwhile from them.

I personally have come to mistrust anything said by a public official on the topic of COVID. Case in point. A few nights ago I watched an interview of a virologist at The Mayo Clinic whom I won’t name to protect his privacy. Playing on the reputation of The Mayo Clinic, this man was likely tapped to give his take on the current situation because he’d be taken seriously by viewers. He confesses that he’s worried about the omicron “blizzard” (his words, coming from Rochester, MN, and all) that stands to overwhelm our healthcare system, that he’s worried that there are not enough people who are vaccinated and boosted, and he’s pretty sure that COVID19 is going to be around for a good deal longer. Omega, not omicron, is the last letter in the Greek alphabet, so we have a ways to go. And, yes, Mayo man believes there are bound to be other COVID variants that may make what we’ve experienced thus far seem like a walk in the park. And, yes, per this man, vaccines are the panacea, the be-all, and end-all of protection against serious disease.

Except that vaccines don’t protect against getting the disease, and bearing in mind that omicron is quite clearly a mild infection in most people, do we need to worry as much about protection against severe disease? True, because of the sheer numbers of cases of omicron, the number of patients in hospital appear to have risen sharply (though not commensurate with the rise in cases in general). But those numbers may not be accurate because, for one thing, hospitals receive money from Washington for every COVID patient they treat. That would be incentive for attributing death to COVID rather than to, say, pancreatic cancer or cardiac arrest in a patient who just coincidentally tests positive for COVID. And that would throw off the actual number of deaths due to COVID and its sequelae.

It is striking, however, that never does this virologist at The Mayo Clinic offer any kind of helpful, avuncular clinical advice like our old family docs would have done. Something like the FLCCC Alliance has done.

This physician from The Mayo Clinic can’t give such advice, though, because, if Robert F. Kennedy, Jr., in his book The Real Anthony Fauci, is correct, and he has no earthly reason not to be, this man from Mayo, like so many other infectious disease experts and virologists in the U.S., is very reliant on little tony fauci for research grants, and anything that might offend the fascist creep stands to ruin this man’s reputation and his lab’s future as virologists of high standing.

Sometimes I see Fauci as a kind of Bernie Madoff, but much more evil. Bernie was just a schlemiel who didn’t know how to escape the spinning turnstile until the financial crisis of 2008 did it for him. Yes, people saw their retirement savings go up in flames, but Bernie’s misdeeds are in no way as vile and contemptible as to those of the homunculus dictator of NIAID, whose pernicious policies must be responsible for thousands, if not millions, of deaths. We know from word of mouth, hundreds of anecdotal reports, and mega-analysis retrospective studies (the sine qua non of clinical research studies) that the vaccines are clearly associated with dire effects and, most disturbingly, that the vaccines may have caused more deaths and serious injuries than COVID itself! One ominous clue to this was noted by a life insurance adjustor in Indiana. The man was shocked when reviewing 2021 pay outs to policy-holder beneficiaries that there was an unexplained, and actuarially improbable, 40 percent increase in deaths in the state not attributable to COVID or the usual causes of deaths in a year. This actuarial anomaly couldn’t be explained except by something mysterious that no one could identify—like deaths due to the COVID vaccine?

Then there’s the remdesivir praised to the hilt by Fauci, which Kennedy says causes patient death from kidney failure within four days of the start of treatment in patients in extremis (i.e., near-death), a death that can easily be attributed to COVID and not the antiviral agent. This, of course, would seriously skew the true numbers of deaths due to COVID. The antiviral also showed no statistically significant clinical effect. In other words, it’s a dangerous dud.

The skullduggery just goes on and on. Speaking for the world, we are weary of COVID, we are weary of the lack of transparency regarding the data from the preclinical testing of the vaccines, and we are weary to death of the deceit, treachery, deception, and deliberate cover-ups of damning data and the fools responsible that have plagued this pandemic from the very beginning.

Photo by Brett Sayles from Pexels

Skullduggery as a Primary Cause of COVID Death is posted on Conservative Daily News – Where Americans go for news, current events and commentary they can trust – Conservative News Website for U.S. News, Political Cartoons and more.