For some time now, the social media giants that have been unlawfully funded by the federal government, specifically the Central Intelligence Agency’s front group In-Q-Tel, have been censoring people who dissent from the official narrative and who offer the truth in its place.  Now, Facebook and Instagram have deplatformed Robert F. Kennedy’s Children’s Health Defense.

The website issued a statement on Thursday stating “On Wednesday, Aug. 17, without warning, Facebook informed Children’s Health Defense (CHD) that our page was deplatformed (unpublished). Simultaneously, our Instagram account was deplatformed (suspended). Each of these platforms had hundreds of thousands of followers. Collectively, more than half a million followers have been denied access to truthful information.”

This was the notification that was received from both platforms. 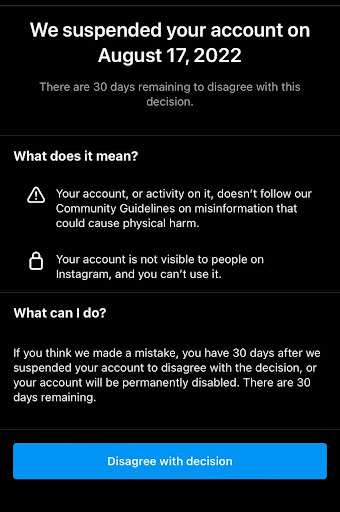 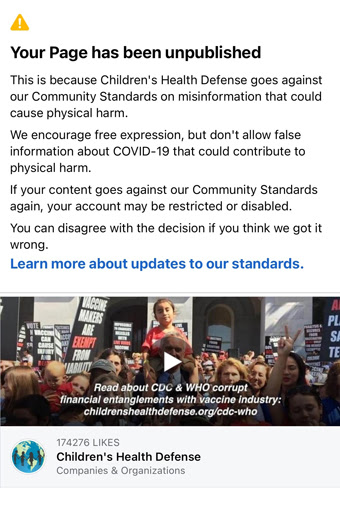 CHD sent out an email to detail what took place.

Despite not posting content on Facebook for the past 21 days due to an existing 30-day ban, and constantly self-censoring our content in an attempt to avoid continual shadow-banning and censorship, both pages were abruptly deplatformed. Removing CHD accounts is evidence of a clearly orchestrated attempt to stop the impact we have during a time of heightened criticism of our public health institutions.

Deplatforming by the tech giants came days after the Centers for Disease Control and Prevention (CDC) quietly walked back many of their previous COVID-19 policies that CHD has criticized since the beginning of the pandemic. Within hours of CHD deplatforming, CDC director Dr. Rochelle Walensky shared her plans for overhauling how the agency works while admitting to a flawed response to the COVID-19 and pandemic missteps.

There’s no clear indication of why Facebook and Instagram chose to deplatform us at this time, but the timing dovetails with our ongoing censorship lawsuit against Facebook. CHD filed a lawsuit against Meta, which owns Facebook and Instagram, in August, 2020. Recently, in its Ninth Circuit Court appeal filed on July 29, CHD provided the court with CDC-produced documents the agency shared with Facebook. These documents, provided to Facebook on a regular basis, contained what the CDC considered misinformation. Titled “COVID Vaccine Misinformation: Hot Topics,” the CDC documents asked tech giants to “be on the lookout” (BOLO) for various topics they consider to be misinformation including: COVID-19 vaccine shedding, VAERS reports, spike protein data and more. The CHD case is currently pending in a Ninth Circuit decision.

“Facebook is acting here as a surrogate for the Federal government’s crusade to silence all criticism of draconian government policies. Our constitutional framers recognized this peril of government censorship. We don’t need a First Amendment to protect popular or government approved speech. They incorporated the First Amendment specifically to protect free expression of dissenting opinions. They understood that a government that can silence its critics has license for every atrocity.”

Big Tech Wants Us Silenced … Don’t Let Them Stop Us!

Despite attempts to censor CHD, we will continue our important mission. Many people only followed us on these large social media platforms so it is important that we let them know we have been deplatformed. Please share all or parts of this email with your friends and family so they can sign up for our free newsletter, “the Defender,” and watch our censorship-free shows streaming live daily on CHD.TV. Right now, email is the most reliable way to stay in touch.

CHD is now involved in a lawsuit to preserve their freedom of speech, as well as all others from lawless censorship.  If you wish to help in that endeavor, you can click here for more information.

Article posted with permission from Sons of Liberty Media.

Loading...
"Not by might, nor by power, but by my spirit, saith the Lord of hosts." Zechariah 4:6
BEFORE IT'S NEWS ON TELEGRAM
GET THE TELEGRAM APP - https://telegram.org/ JOIN OUR CHANNEL - https://t.me/BeforeitsNews
Read it..
BEFORE IT'S NEWS
SIGN UP FOR OUR NEWSLETTER
Today's Top Stories
Revisit!! Fox News Reading Of Theory Of Whitehat Military Sting Operation Arrest Of Biden Crime Family And Stolen Election Co-Conspirators, Military Tribunals!!
Q Anon - President Trump - White Hats ~ The World Is About To Change! - Must Video
Situation Update: UN Storm Troopers Takeover London! CCP Double Coup! XI Double On House Arrest! Iodine Tablets Distributed In Poland! Russian Military Build-up! FBI Corruption Runs Deep! - We The People News
Steve Quayle Warns The First Cities To Be Targeted For Nuclear Annihilation Will Be In The United States! - Mike Adams Must Video
This Happened on Both Coasts Yesterday Nearly One Hour Apart!
Major Stuff Happening!!! Virginia, China, London Is the Arrest Happening??
X22 Report: It’s Always Good To Be Underestimated! The Old Guard Is In The Process Of Being Destroyed! - Must Video
"Everyone Will Be Wiped Out In 30 Days" Jeremy Grantham's Last WARNING! - Must Video
Full Court Press Against The Deep State Started! Major Plays Happening! Deep State Is Failing! - Must Video
Oh Sh*t, in 24 Hours Everything Changes & Putin Is Ready! - Redacted News Live
Loading...
Featured
Bill Gates Says CIVIL WAR WILL HAPPEN, Says Hung Election AND Civil War Coming Due To Polarization
Apparent Sabotage Disables Nord Stream 1 and 2, Cutting Off All Direct Gas Supply to Germany from Russia
If You Are Over 50 Your Government Wants You Dead
ZetaTalk Newsletter as of October 2, 2022
Ruled by God’s Laws or the Dictates of the State?
Prophecy News - 'Judgment on America', given to Terry Crockett, September 22nd 2022
Spike Proteins in Covid Injections Compromise Not Only Current but All Future Pregnancies
Comparisons of U.S. Median Household Income Estimates
Through My Bible Yr 02 – September 27
Millions of Americans say NO to COVID shots, CDC data reveals
Loading...
Top Global
Fed Whistleblowers Say Communists Have Seized Control of FBI & DOJ! (Video)
Whistleblowers Are Now Sabotaging Deep State Agenda! (Video)
If You Are Over 50 Your Government Wants You Dead
Trudeau drops COVID Vaccine Mandate because 9 in every 10 Covid-19 Deaths have been among the Triple/Quadruple Vaccinated in the past 3 months
Max Igan – The Greatest Democide In History
Early-onset cancer on the rise around the world, new study suggests
My Promise To Trudeau / Face Diaper Study Showing Significantly Higher Mortality
FYI: The Elites AI and Robots Don’t Need You (Video)
In 72 Hours... Things Get REAL WEIRD! - Canadian Prepper
Simon Parkes, Phil Godlewski Latest Intel Highlights - God Bless All Patriots (Video)
Top Alternative
TRANSFUSION CONFUSION: American Red Cross caught mixing vaxxed blood with unvaxxed blood
My Promise To Trudeau / Face Diaper Study Showing Significantly Higher Mortality
Deagle was exposing a thoroughly thought out plan which is only now coming into focus.
It Really Is This Simple
What Scientists Found in Russia Has Left People Speechless
FYI: The Elites AI and Robots Don’t Need You (Video)
Q Anon Braking trump: No One Receiving Eno
Meloni, the Woman King, peer reviewed UK data on the vaxx is not looking good: Links 2, September 26th, 2022
Trump update 09/26/2022..This is how past Presidents were treated on Documents. Compare to me. Big story - this nonsense should end, now. WITCH HUNT!
“The Head Wound” -Guess Who’s Back? The Complete Government Playbook-A (7) Year Timeline/No-One Can Refute It, Because We ALL Lived Through It! We Have All Of The Evidence!