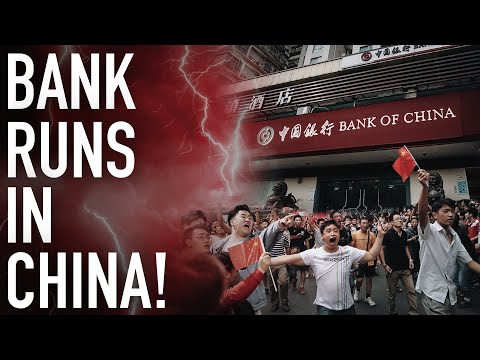 Bank Runs In China! Millions Rush To Get Their Money Out Of The System As Cash Shortage Begins! – Epic Economist

China’s banking sector is in a total and complete mess right now. Millions of Chinese citizens are desperately rushing to get their money out of the system as fears of a bank collapse continue to rise. New reports are warning that bank runs are sparking unprecedented chaos all across the country, given that many savers just discovered that they are at risk of losing everything. The country’s growing economic and financial instability is threatening to trigger a ripple effect all across the planet, making global financial markets edge closer to a massive meltdown. That ultimately means that not only the Chinese could be financially wiped out overnight – the whole world is actually moving towards another historic downturn, and as bubbles burst and markets crash, we’re all in danger at this point.
Since the start of 2022, a series of Chinese banks have suspended cash withdrawals without giving any explanation to their customers, raising fears that a much bigger financial problem could be looming as the nation’s real estate sector crashes and the rate of loan delinquencies continues to soar. There is no official data reporting the total amount of funds that bank depositors are unable to withdraw yet, but experts estimate that hundreds of billions of yuan are being withheld. The latest numbers showed that in April alone, over 400,000 banking customers across China were unable to access their savings.
Of course, in a nation of over 1.4 billion people, that’s a drop in the ocean of the Chinese vast banking system. However, experts say that what is exposed could only be the tip of the iceberg. Since late last week, bank runs have started to accelerate all over China. While millions of Chinese people remain unable to access their bank deposits since January, many others are rushing to get their money out of the system as soon as possible, but most of them are having difficulties when trying to withdraw cash from their bank accounts.
Local reports expose that “some banks will only serve a limited number of customers per day, some banks limit each client’s withdrawal to no more than 1,000 yuan and others closed their branches. Even the ATM machines are empty”. According to Hao, a resident in Longgang district in Shenzhen, freezing accounts is a method banks use to stop people from withdrawing cash.
China’s gigantic real estate sector, which accounts for as much as 30% of its GDP, is facing a devastating crash ever since the country’s biggest property developer, Evergrande, became insolvent. Right now, global financial markets are on edge as the world’s largest economies face the burst of housing bubbles while stock markets crash. The meltdown of the Chinese banking sector can cause a domino effect of systemic failures and a credit crunch, increasing the possibility of a global financial crisis in the fourth quarter of 2022.
Even though many Americans may think that what’s going on in China will never occur in the U.S. since China’s main banks are state-owned, according to the financial expert and best-selling author, Robert Kiyosaki, that possibility is not so far removed. Millions of American families are at risk of seeing their savings disappearing overnight due to their accounts’ high exposure to asset bubbles and soaring inflation, he alerted. In other words, as social and economic disorder continues to spread across the planet, soon, we could be the ones seeing our savings suddenly vanishing from the system.

Bank Runs In China! Millions Rush To Get Their Money Out Of The System As Cash Shortage Begins! - Epic Economist

#170 China’s Military is for World Peace

Dr. Li-Meng Yan: How The CCP Is Targeting America & The World! - The JD Rucker Show

Uncensored: Jeff Nyquist - China Plan to Invade US by Mid-Terms in November & Australia at Risk! - Maria Zeee Must Video

#168 Is Australia Going to Cave to China? | Andrew Phelan

Living In China Vs. Living In America! This Is Truly Shocking!! - A Must See Video!

#166 US Strengths, Weaknesses in a War with China | Mark Montgomery

As First US City Is Surveilled By DHS & Chinese Drone Company, China Sends Swarm Of Autonomous Drones Through Forest To Hunt Humans (Video)

#163 Is China Tearing Itself Apart?

#161 The US Battles China in the Pacific | Cleo Paskal

Horrifying Video Emerges Out Of The Chinese COVID Dystopia! - The Dan Bongino Show

Something Bizarre Is Happening In China (Are We Next?)!! - Must Video

Stories With Most Comments

China is busy trying to build a huge canal in Nicaragua. Making financial and economic...
YOU KNOW the Chinese will use DNA enhanced BIO weapnos to KILL white man off. Yes, the...
i wanna be part of the welcoming committee --show them where all the dirty policticoes...
Seems your the last one to the dance and a a few dollars short. We were screaming this...
This is the path of destruction our "leaders " have put us on. They sold out the working...