John McAfee on the Run! Only Patriots Go to Jail in Fraud USA! 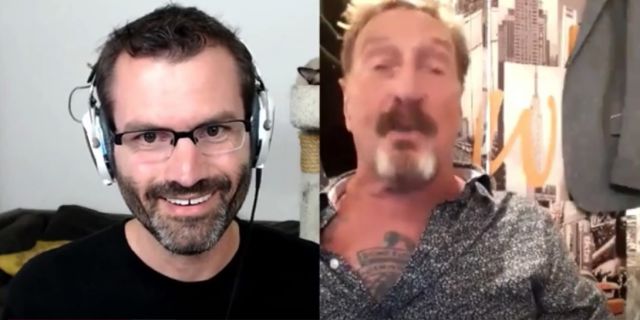 Patriot John McAfee gave a great interview to Lift the Veil on YouTube.   I love this guy John McAfee.  He’s quite entertaining and of course he’s fully awake to all the lies we’ve been told!   The crooked DOJ is trying to grab him to shut his mouth mostly because he talks about the fraud of fiat currency. John has heard the criminal DOJ were convening a grand jury before John left the United States.

He first went to the Bahamas but heard the US was claiming he was involved in murder, racketeering and money laundering so they could grab him and then put him in jail forever!   So he went to Cuba next.   While in Cuba he found out everything the US was saying about people eating rats to survive was a huge lie.   The US pressured Cuba to hand him over but the military let John leave instead.

Next stop was Dominican Republic where he was arrested and they took his guns.  He even had to fake a stroke but was eventually able to get out of there to the United Kingdom and immediately left to a secret location.

This interview shows what a fraud our DOJ is and why only patriots go to jail.  If you’re Hillary Clinton or Jeff Epstein you can murder and rape whoever you want and get away with it.  But God help you if you’re a patriot who speaks truth!   I’m ashamed of my country – John McAfee is a hero who could be helping Trump but instead Trump is allowing the crooked DOJ go after a great patriot while many of the deep state who have never been charged with anything  should have been hung for treason long ago!

Frankly, the way things are going now with the liar Bill Barr saying Epstein hung himself, I don’t think any deep state scum are going to jail!   They haven’t to this point and they killed JFK in broad daylight and took down the towers on 9/11 and got away with it all!   Welcome to Fraud USA!   Fake News, Fake Medical System, Fake Justice System, Fake Politicians!  It’s all fake and I’m tired of it!  I can’t even stand to watch Fake Fox News anymore because they’re liars too and I won’t support known liars no matter if they tell a bit more truth than Commie CNN>

Tweet this story to Trump @potus and tell him to back off John McAfee who is a patriot!   He didn’t put Hillary in jail so how dare him let the DOJ arrest McAfee while McAfee could be helping Trump put people in Google, Facebook and Twitter in prison for TREASON and election rigging.   Wake up President Trump and start doing something besides pushing Red Flag laws which are a very bad idea! Release the Free Energy technology and put some bad guys from the deep state in prison!  You can’t win on Defense and you’ve been on Defense for over 2 years now.   Go on Offense NOW and rip those traitors to shreds!  If you won’t do it, we’re doomed!

Loading...
"Not by might, nor by power, but by my spirit, saith the Lord of hosts." Zechariah 4:6
Read it..
BEFORE IT'S NEWS
SIGN UP FOR OUR NEWSLETTER
Today's Top Stories
Sarah Westall: Whistleblower Brutally Beaten, Coronavirus Explained From Chinese Healer, Hired Mercenaries
Q: Hollywood Is Burning! Is Barron Trump Q? Barry's Belated Impeachment? Best Is Yet 2 Come! - Great Video
Billy Meier Predictions and Prophecies Are Now Being Proved Correct
Whistleblower found dead
Worldwide Virus Alert! Millions Infected & Spreading! - Must See Video!
Mark Taylor: Q! Gloves Are Off, Fight Is On
The Billions Are Gone! Disappeared!
David Abel Exposed As Crisis Acting Freemason On Board Diamond Princess Cruise Ship
PLAGUE Upon Us? 3 MUST DO'S To Combat CORONAVIRUS
The Donald: The Serpent Seed From the Royal Bloodline/Tribe of Dan (Have You Been Snared by Trump?)
Loading...
Featured
Greg Hunter: Covid19 Real Beast Causing Dangerous Pandemic! China Virus Is the Real Deal, Get Ready! – Chris Martenson Must Video
The Government Has Lost Control of COVID-19
31 Updated Reasons why we should close our borders to fight the spread of the deadly Wuhan Bio-Weapon Coronavirus Virus Pandemic by Kyle Kenley Kopitke, 22 February, 2020
PLAGUE Upon Us? 3 MUST DO'S To Combat CORONAVIRUS
Colorado Cop With WWJD Bracelet Murders an Unarmed Man
Bombshell Secrets Revealed! Behind the Veil of Mass Deception: Just How Fake Is the [Fake News]?! Great Video!
"Turn Off Your Camera and Step Out of the Car" New York State Extortion Stop
Did a Senior Chinese Military Intelligence Officer Call the Coronavirus a Hoax or Did Dean Koontz Write A 'Novel' Virus Sequel?
The 5G Trojan Horse: What You’re Not Being Told
‘Whom the Gods Would Destroy – They First Make Mad’ – COVID-19 Hysteria Goes Global