A Group Of Parents Sent Their Kids’ Face Masks to a Lab for Analysis. Here’s What They Found Including 21 Pathogenic Strains!!

We’ve been told for well over a year that widespread forced public masking should be implemented because, even if only moderately to slightly to negligibly effective at curbing the spread of COVID-19, there are ZERO drawbacks.

“It’s only a minor inconvenience,” they bleat.

“If it saves ONE LIFE, it’s worth it!” they implore.

Meanwhile, we on Team Reality have not only continued to point to real-world data that shows masking to be entirely ineffective, we’ve also maintained that forced public masking, especially long-term, has negative societal and even health ramifications that the powers-that-be are all-too-happy to ignore in subservience to their newfound face mask god.

It only stands to reason that one of those health ramifications would be the fact that millions of people, particularly children, have been forced to wear and carry around pieces of cloth they’ve continually breathed through for hours on end. What lurking pathogens might be found on these disgusting contraptions being incessantly handled, stuck in pockets, and mindlessly tossed on books, tables, and desks? Well, one group of Florida parents sent a batch of masks worn by their children to a lab to find out. And yeah, you’ll probably need to make sure you aren’t eating dinner anytime soon before you digest THESE results.

Gainesville, FL (June 16, 2021) – A group of parents in Gainesville, FL, concerned about potential harms from masks, submitted six face masks to a lab for analysis. The resulting report found that five masks were contaminated with bacteria, parasites, and fungi, including three with dangerous pathogenic and pneumonia-causing bacteria. No viruses were detected on the masks, although the test is capable of detecting viruses.

The analysis detected the following 11 alarmingly dangerous pathogens on the masks:

The face masks studied were new or freshly-laundered before wearing and had been worn for 5 to 8 hours, most during in-person schooling by children aged 6 through 11. One was worn by an adult. A t-shirt worn by one of the children at school and unworn masks were tested as controls. No pathogens were found on the controls. Proteins found on the t-shirt, for example, are not pathogenic to humans and are commonly found in hair, skin, and soil.

A parent who participated in the study, Ms. Amanda Donoho, commented that this small sample points to a need for more research: “We need to know what we are putting on the faces of our children each day. Masks provide a warm, moist environment for bacteria to grow.”

These local parents contracted with the lab because they were concerned about the potential of contaminants on masks that their children were forced to wear all day at school, taking them on and off, setting them on various surfaces, wearing them in the bathroom, etc. This prompted them to send the masks to the University of Florida’s Mass Spectrometry Research and Education Center for analysis. 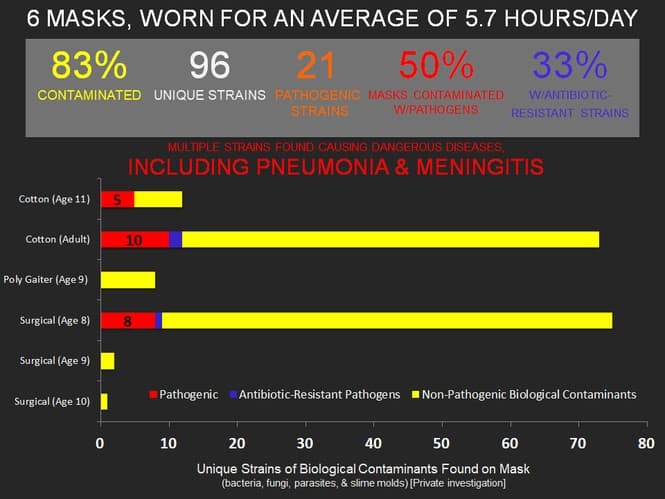 The below chart, put together by the group of parents, shows the potential dangers from each pathogen: 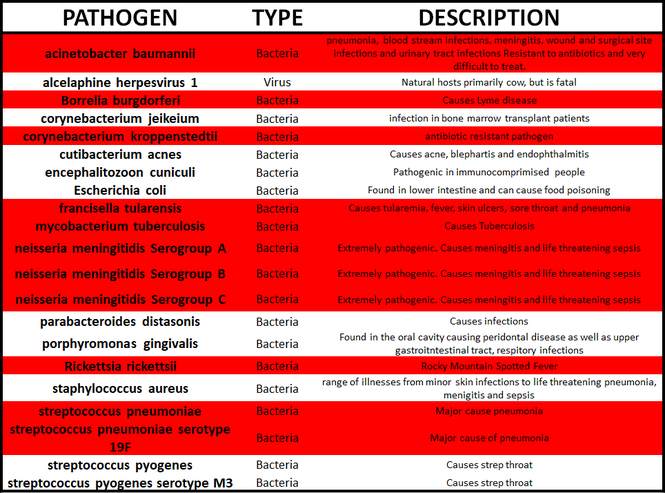 Appetizing, eh? Of course, nothing above, or anything else, will deter the extremists in the masking cult, some of whom now want to see masking in schools forever.

Pure and simple, medical tyranny! May I add, child abuse?

The criminals need to be arrested and taken out of any influence.

Related in this Category