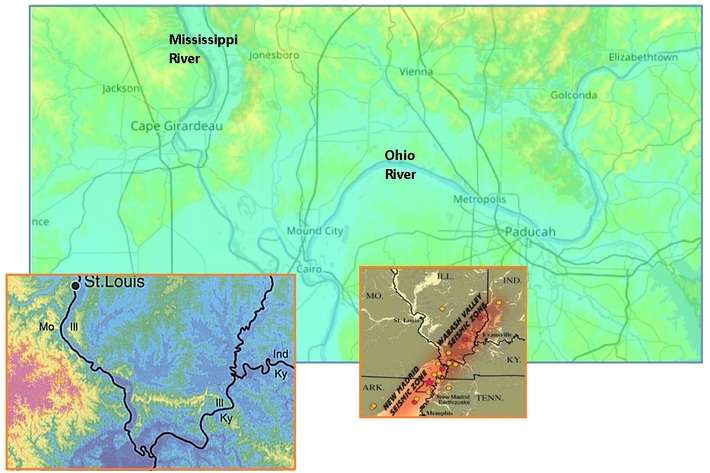 The Stage Is Set For A Great North American “Jolt” And Then Planetary “Finale” Including European Tsunami!!  Wabash Valley Seismic Zone Next To New Madrid Is Shaking!!

The New Madrid Fault Line Rupture will race to a rapid conclusion when the rock Bridge above the little town of New Madrid snaps. This is #5 in the JOLT sequence, and per the Zetas when this occurs there will be an “immediate” rupture at the Azores and a resulting tsunami racing toward Europe. Thus #6, #7, and #8 happen in a flash.  This bridge is located at the junction of the Ohio River and the Mississippi River. There is hard rock to the right and left, and exactly where the snap will occur is not known, but the Zetas have stated that the Wabash Seismic Zone should be watched closely. On January 7 there was significant shaking felt in the Wabash zone, as reported by Volcano Discovery. This is precisely the region the Zetas were suggesting should be watched. As the comments show, this area was broad and the shaking significant. An attempt was made after the fact to claim this shaking was due to a coal mine demolition nearby, citing a single source for this claim – a professor who was relying upon the same information we are herein reporting. 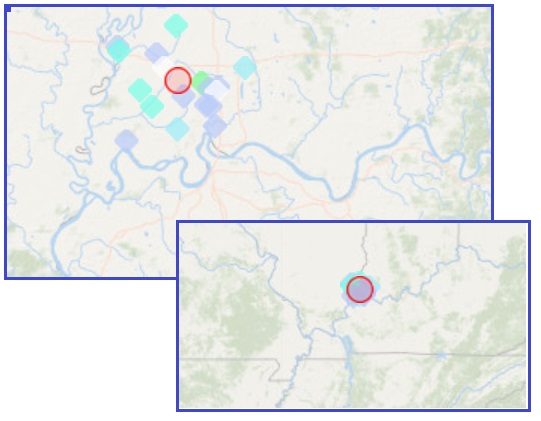 IITM: This is setting things up for a great tectonic finale!!

The New Madrid Finale is a process, and as defined by the Zetas in their actual words the Finale Timeline was defined as starting before the end of 2022 and as a process that would take “weeks, not months”. For those who assumed the European tsunami would occur prior to the end of 2022, the Zetas suggest they learn to read. Below, a scan of all ZetaTalk comments where the Finale was addressed. It is a process, and the process began on December 13, 2022 when the Rock Hook under Turkey fractured.

ZetaTalk Comment 1/1/2023: Nancy has carefully gone through all of our words where the word Finale was used, so the reader can determine for themselves what the word in context means. A Finale in any context does not carry a timeline. Even a sexual orgasm is a Finale that has an indeterminate timeline, but likely minutes, not days and certainly not years. But our concept of the New Madrid Finale definitely included the JOLT in the Rock Bridge over the juncture of the Ohio and Mississippi Rivers, with an “almost instantaneous” rupture at the Azores causing the European tsunami.

Here are the Zetas’ actual words, and the context of those words. 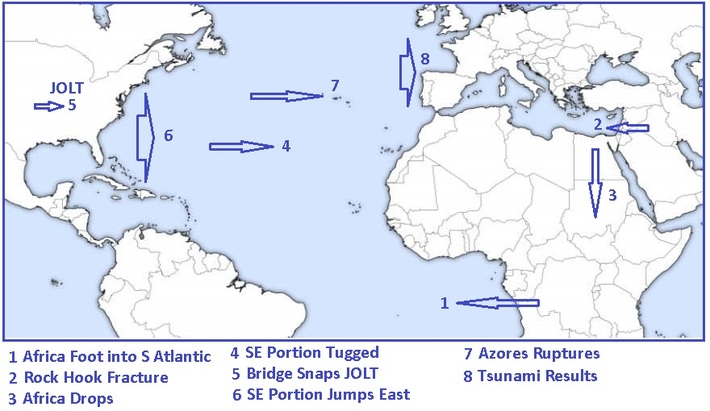 ZetaTalk Context 4/30/2022: Before the jolt at the hard rock on either side of the town of New Madrid occurs, signaling the start of the New Madrid rupture FINALE, the separation must travel up the Mississippi. … The Caribbean moves as a unit with S America, so the Caribbean Plate was likewise bumped. What will happen when the New Madrid FINALE occurs? Certainly Eurasia, which shares a long border through the Arctic with N America will get bumped. The Pacific Plate and parts West will react as the Mainland Portion is suddenly free to shift to the West. The Africa Plate will likewise be free to move when the SE Portion is released from its attachment to the Mainland Portion. Most of the world will thus get a bump.

ZetaTalk Context 8/31/2022: We have predicted that the New Madrid FINALE would occur before the end of 2022, and the Junta is braced for this. … We are not allowed to give a specific date for the New Madrid FINALE, but it is clear that the current rumors about President Trump’s return are setting the timeline to put this SCOTUS announcement first. The New Madrid FINALE will be sudden but will be preceded by the steps we have outlined. Africa will slide into a void in the South Atlantic, and is already showing signs of this slide. The Africa Roll will not be gentle, from ripping at Gibraltar and the Sinai to increasing separation at the Azores.

As the Finale Process has unfolded, a number of Zeta predictions have come true. As we detailed in last week’s Newsletter, the Zetas predicted that big quakes on the West Coast would emerge prior to the New Madrid Finale, and this ZetaTalk prediction has occurred. The Zetas have often referred to the foot of Africa shifting into the void in the S Atlantic as the Atlantic splits open. The scrunch of the foot of Africa toward the West can be seen in the SO2 distress maps, but also in the news where large waves can be generated near S Africa. 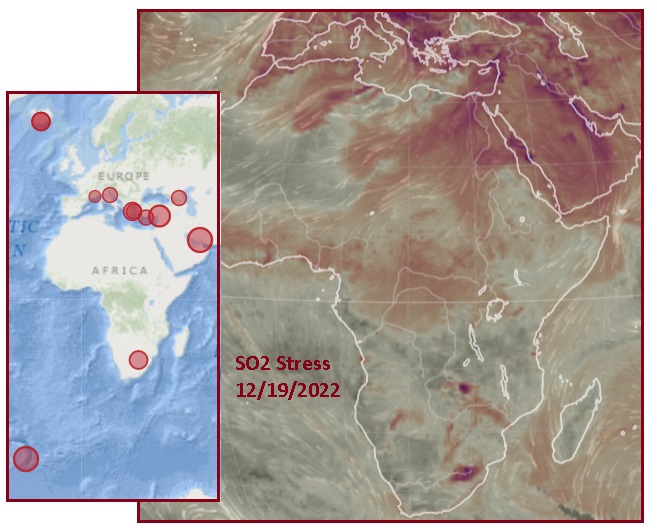 Three people were killed and more than a dozen others injured when a monster “freak wave” struck a packed beach in South Africa’s coastal city of Durban Sunday. The EThekwini Municipality said that those who died were swept out to sea by rip currents and drowned. At least 17 people were taken to area hospitals to be treated for injuries sustained during the incident. The patients were said to be in serious or critical condition. A fire broke out in a refinery in Iraq’s northern city of Erbil and attempts by firefighting teams to get it under control are ongoing.

ZetaTalk Prediction 2010: We have described the churning that will afflict Iraq as a turning of the Arabian Plate, the boot. As the African Plate rolls, and drops its rounded top toward the Indian Ocean, the Red Sea pulls apart, the Afar Triangle in Africa pulls apart, and the boot rolls. This turns the pointed top of the Arabian Plate so it pushes through Iraq, which is what is building the mountains that separate Iraq and Iran. This takes Jordan and Syria for a ride, as they are in the rear seat and not where compression is occurring. But all of Iraq is crushed into the mountains along its border with Iran. This will explode the oil fields in northern Iraq, heave and split the ground, and make survival in this portion of Iraq very risky. The hills of western Iraq will be safe.

As the Africa Plate drops its NE corner, it scrapes along past the Sinai and the Red Sea, causing chaos in the Suez Canal. The Zetas have long predicted this as a time when the NE corner would “scrape” past lands to the East but provided timely details in November. In late December, the Suez was closed intermittently due to this process, especially at night when most earthquakes are generated due to the Polar Push happening on the other side of the globe. On January 9 a container ship ran aground. This Suez closure had been predicted by the Zetas. On December 30 the Erta Ale volcano at the end of the Red Sea – the site of many recent quakes – erupted. 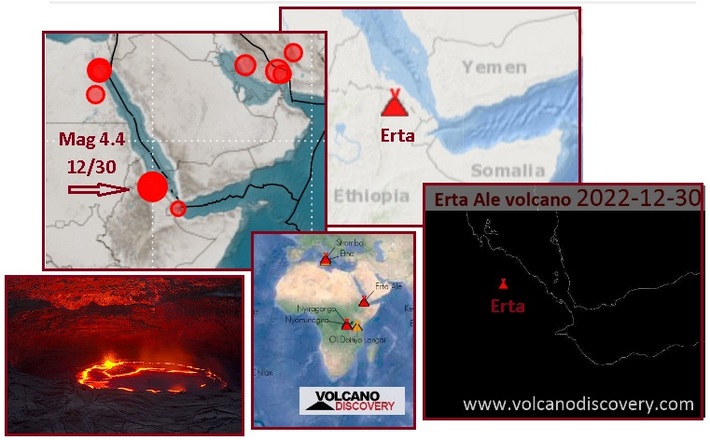 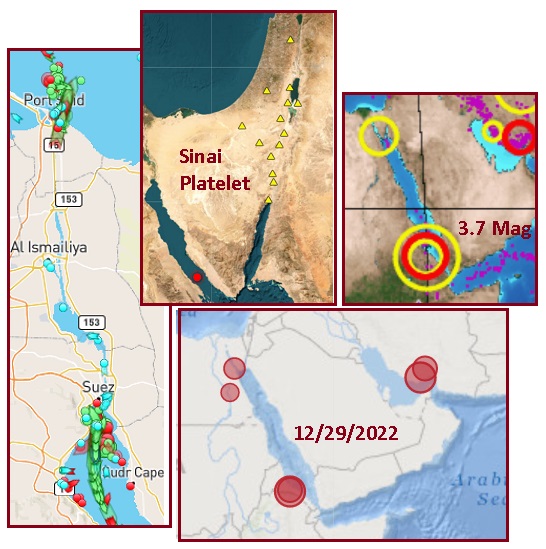 Footage shows the moment tourists were evacuated from Jordan’s ancient city of Petra.

Reports from the northern city of Tripoli – Lebanon’s second-largest and most impoverished – said Lebanese, Syrian and Palestinian men, women and children were on the boat that left northern Lebanon after midnight.

Satellite tracking data analyzed by The Associated Press earlier showed the Glory in a single-lane stretch of the Suez Canal just south of Port Said on the Mediterranean Sea.

ZetaTalk Prediction 11/30/2022: We have stated that Sinai will become an island with 50 additional miles separating the Sinai from land, that the Red Sea will widen, that lands with dual loyalties along the Saudi Plate border will be subject to scraping, that a void will appear in the Mediterranean above Egypt, and that the slide of the Africa Plate through the Middle East will scrape down along the Dead Sea plate border.

The Sinai is considered a platelet – the Sinai Subplate. When the Sinai is pressed eastward at its southern tip, the entire Sinai Subplate will swing counterclockwise into the Mediterranean void.  The Sinai will have a new orientation to lands on either side. Israel also resides on the subplate, so the separation at the Dead Sea Fault Lines will increase, and Israel may also become an island. Eventually, the Red Sea will open allowing shipping in the Suez Canal. All these matters are in God’s hands.

And on January 2 a quake swarm at the Azores began – multiple quakes toward the top of the Azores Triple Junction – and on January 3 more action at the bottom of the Azores. These are not the big #7 rupture at the Azores that would allow a tsunami to race toward Europe, but predecessor #4 tugging quakes. But once again, this is a Zetas prediction come true. Zetas RIGHT Again! 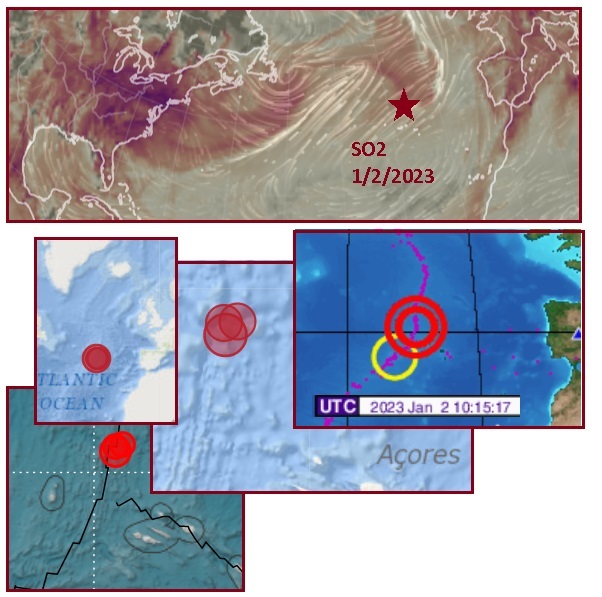 ZetaTalk Prediction 7/31/2022: We have also detailed how the African Roll will tear open the Atlantic at the Azores, facilitating the New Madrid rupture.

ZetaTalk Prediction 9/30/2022: When the Turkey hook snaps and the Africa Plate drops along its East side, the Azores will rip open.

IITM: Is this all to be in motion by the end of 2023? Zetas say so…. O.N.E. News has been following this subject for a while.

IITM:  Not huge earthquakes, but it does have some earthquake researchers feeling nervous and unsettled. The New Madrid fault follows along  the Mississippi River and…

As MrMBB333 says… the stars in this map each represent a video sent to him, by his viewers, and they all saw the same…

North America Is About To Snap In Half?!! HUGE Development Startling Physical Evidence Cannot…

Recent Mississippi River Developments Suggest Something Major Is Going On!! Related To North American Continent Cracking At New Madrid Faultline Perhaps?? 1.  Zetas said this: Is the…

Probably one of the most important news updates you will ever hear, relating to earth changes AND…

The “Big One” Is Imminent! 10 Tectonic Plate Movements Related To Major New Madrid…

We Are In The Last Days Before Major Imminent Earth Changes, Including New Madrid…

We Are In The Last Days Before Major Imminent Earth Changes, Including New Madrid Unzipping!! Warnings You Don’t Want To Miss! Tons…

Revisit Startling 2011 Prediction: A Major Storm Comes To California Which…

Incoming Winter Heatwave Could Cause Massive Chaos!! Brace Yourself… Cycles Of…

The Event That Will JOLT The World And Crack North America…

‘Once in a Generation Winter Storm’ Underway And It’s Massive! –…

Signs of the Pole Shift… Watch Purple Plasma Coming Off Of…

The Great European Tsunami To Come, Will Be Different Than Most…