Q News: Is Cure for Coronavirus "Waiting in the Wings"? (Dave X22) 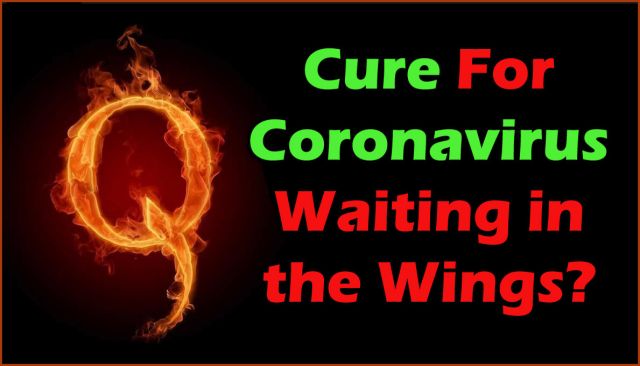 Now very interestingly with this coronavirus outbreak we know there’s a very big push with the economy the central bank the deep state and the elites.  They started it in China because that is the focal point and if you look they’re very worried about the global economy.  Now this is a true pandemic and it’s spreading like crazy.  You wouldn’t be worrying about the global economy you’d be worried about everyone getting it and everyone dying right?  But they’re putting out articles like crazy that this is going to affect the global economy.  So it seems to me that their push is to bring down the global economy.   But what’s very interesting about all of this and Julian’s Rum points this out.  He said, remember this bizarre video from 12/10/2019.  “I just like to point out that the published date roughly coincides with the corona virus outbreak in mid-December.”   Now this is when Obama came out and he was talking about “hey you don’t have that much time to join up for healthcare”… Now this was about Obamacare.  This was during Christmas and he showed his top gifts that were under $10 but he has very strange information and pictures that he showed.  One was a Zen garden to say okay look at China I’m talking to you.  Then it was the Green Goblin holding out $100 and it says “who love construction but hate the Green Goblin”.  So we know that Trump is into construction and it looks like he’s (Obama) saying that he (Trump) is the Green Goblin.   We also have a picture of the National Archives Museum this is the presidential library of Obama and shows his dogs.   He also has the insurance card.

They started it (Covid-19) in China. This was the hub of the central bank globalist system. If you can bring China to a halt this would affect Europe.  If it affects Europe and brings Europe crashing down that would affect other countries.  And we can see from the very beginning they’ve (Deep State) been trying to bring down the economy over and over and over again.  Remember the central bank the globalists -  they understand if they can bring down the global economy it would be horrific for everybody and Trump would be caught up in chaos and that’s what they do, they cause chaos.

But I want to go back to post 734 because I do believe the Patriots have something waiting in the wings and the corona virus is very similar to the FLU and back in post 734 (this is February 2018), and Anon says “sauce” and points to a Wall Street Journal article and it says experimental drug promises to kill the flu virus in a day.   Under this it says what a coincidence this board has more power influence than anyone comprehends.  Now this experimental drug that promises to kill flu virus -  is this waiting in the wings and are the Patriots ready to use it?... but again they want the deep state the central bank, the globalists to use their ammunition first to put it all out there to push it as hard as they possibly can and then present it (the one-day drug) which then shuts the entire thing (pandemic) down.

I do believe that is coming and I want to leave with Wyatt who tweeted this out today:

We’re watching the death of the control matrix in real time.

Listen everyone thanks a lot for listening be well be safe and especially be prepared thanks a lot.