I‘ve managed to locate two very different versions of the “plane strike” video of the South Tower on 911 and posted them both below in looped playback.

One is the ORIGINAL LIVE version filmed from a helicopter and the other is the DOCTORED version of the video shown non stop on CNN et al.

When played side by side, the truth speaks for itself.

Scroll down halfway to view…

How many of you still believe two airliners passed straight through the Twin Towers on 911… and came out the other side as depicted? 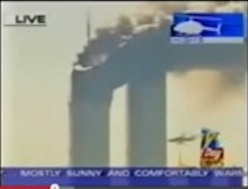 Look at the damage a single BIRD can do to a hollow aluminum airliner: 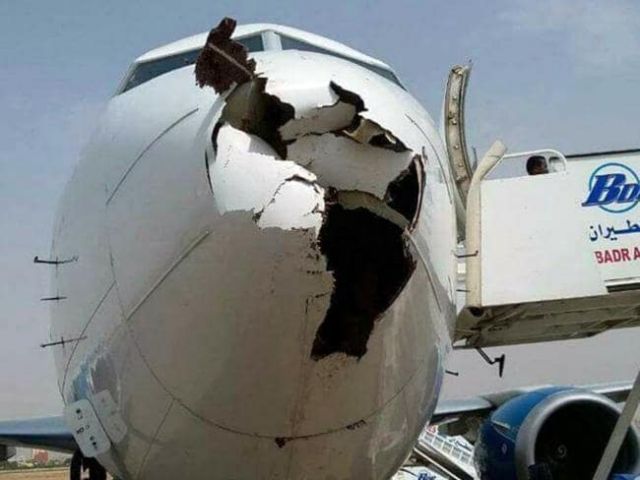 And yet you still believe that on 911 two hollow aluminum airliners cut straight through the regularily spaced 14 inch steel columns as well as the steel reinforced concrete floors and walls of the Twin Towers and came out the other side??? 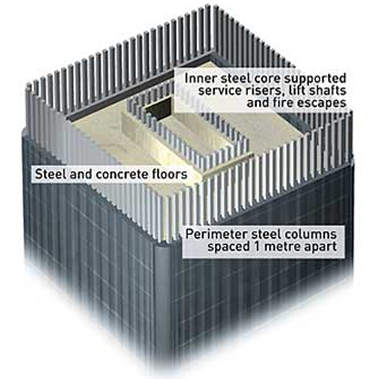 The truth is that the airliners would never have made it past the first row of 14 inch steel beams one meter apart surrounding the Tower… yet every video you have ever seen of 911 has shown the airliners being entirely devoured by the Towers… even coming out the other side!

We were repeatedly shown the same DOCTORED videos and CGI images of animated jets slamming into the Towers over and over and over  till we bought into the “official” story without question.

Aluminum airliners are made out of aluminum foil for crying out loud!!!

The modern day civilian transportation airliner is made out of aluminum and is hollow, similar to an aluminum can. If shot into a concrete and steel reinforced wall, an aluminum can would be crushed on impact and fall to the ground.

Fact is… there is NO WAY an aluminum jet could cut through a reinforced concrete and steel structure.

The plane, if there was one, would have telescoped into it’s self upon impact, the wings and the tail sections would have seperated from the fuselage, and the whole thing would have fallen to the street below!

Even the engines would have probably fallen to the ground outside following impact.

The steel columns would have barely been deformed!

Now using actual photographs and videos which have since been scrubbed from the Internet, you will see PROOF with your own eyes that NO PLANES penetrated or passed through the Twin Towers.

This image represents the impact site of Tower 1. Notice the little person in the red rectangle. Her name was Edna Cintron. She is standing about where the left wing attached to the fuselage of the “plane”. 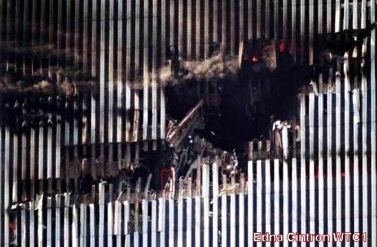 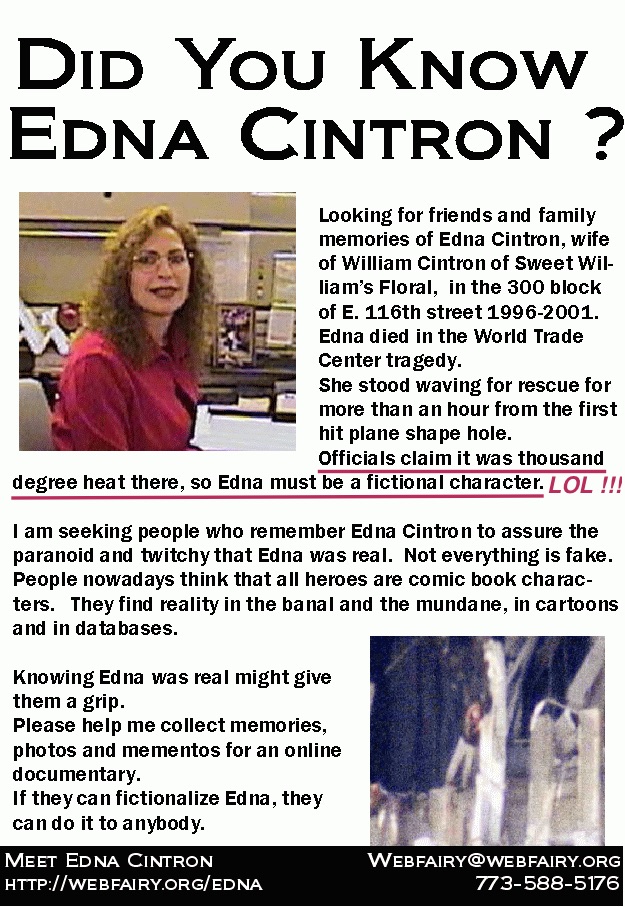 This is a close up of where the left wing supposedly went through.

Notice Edna on the right.

Do you really believe the left wing fit through this tight space?

The blue rectangle at the top shows that the inner steel layer stayed in place when it should have imploded inward upon impact. Instead we see that the explosion was rather towards the outside, ripping away the external steel stucture outwards.

- The plane’s aluminum nose goes through the building… and comes out the other side intact?

I don’t think so… 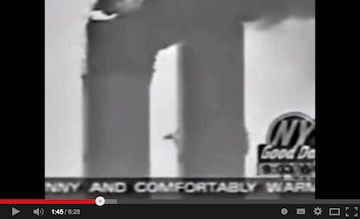 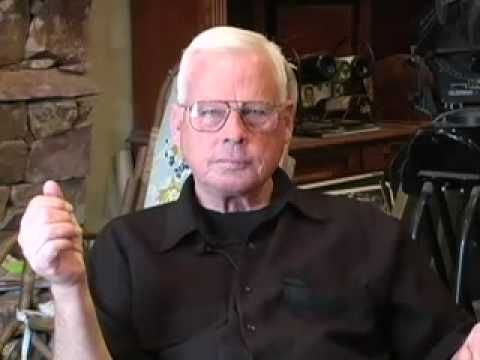 The sworn testimony you are about to discover was given by John Lear, the son of Learjet inventor, Bill Lear.

John Lear is 65 years of age, a retired airline captain and former CIA pilot with over 19,000 hours of flight time, over 11,000 of which are in command of 3 or 4 engine jet transports, has flown over 100 different types of aircraft in 60 different countries around the world. He retired in 2001 after 40 years /19’000hrs of flying.

As a witness in a lawsuit, Mr Lear has given his sworn expert testimony that it would have been physically impossible for Boeing 767s, like Flights AA11 and UA175 to have hit the Twin Towers on 9/11, particularly when flown by inexperienced pilots:

·   “No Boeing 767 airliners hit the Twin Towers as fraudulently alleged by the government, media, NIST and its contractors’, he stated in the affidavit.

·  ‘These crashes did not occur because they are physically impossible as depicted, for the following reasons: in the case of UAL 175 going into the south tower, a real Boeing 767 would have begun ‘telescoping’ when the nose hit the 14 inch steel columns which are 39 inches on center.

·   ‘The vertical and horizontal tail would have instantaneously separated from the aircraft, hit the steel box columns and fallen to the ground.

·   ‘The engines when impacting the steel columns would have maintained their general shape and either fallen to the ground or been recovered in the debris of the collapsed building.”

We were told that the extreme heat from the jet fuel fire melted the steel columns causing them to bow and weaken, such that the structure could no longer support it’s own weight and came crashing down. 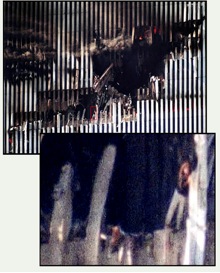 Observe the above photos.

The slash across the Tower in the top image is supposedly the entry site of the “terrorist’s” plane.

Oh… but wait… aren’t there 2 women visible right where the heat should be at it’s hottest?

The one standing is Edna and the other, anonymous, is laying down… their long flowing hair not even singed, not the slightest evidence of excessive heat anywhere to be seen. One is touching the side of the building with bare hands; the other laying on her stomach on what should be a very hot surface.

And we were told that the towers fell within an hour of these photos due to “the intense heat” from the jet fuel fire. As you can see there was no intense heat, no fire! It’s all bull!

These two women were murdered, as were over 3000 others, several minutes after this photo was taken, when the buildings were professionally taken down by CONTROLLED DEMOLITION.

Therefore it is not possible that the heat generated by burning jet fuel could ever have gotten hot enough to melt the steel supports… and certainly not after only one hour! 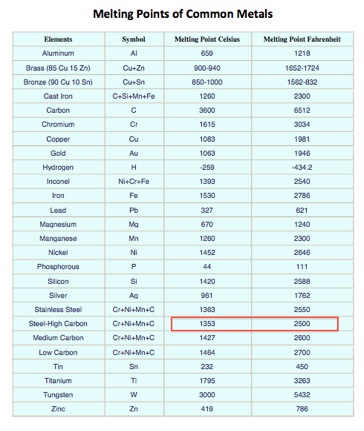 More proof: A Chechnyan 40 story skyscraper burns like a torch for 24 hours and never collapses!

- Proof that the “Official” 9/11 videos were DOCTORED… NO PLANES HIT THE TOWERS.

This next Video is a live news-feed from a News helicopter which was filming the scene when a 2nd explosion went off at the South Tower… with no plane anywhere to be seen!

And then the doctored version is just below it.

If this does not WAKE YOU UP… nothing will.

The original live footage clearly has the blue Hudson river as a backdrop with boats floating on its surface and the New Jersey shore line in the distance. In this video an explosion is seen, but no plane.

The doctored video, however, has the background totally white-ed out to better contrast the fake plane overlay. Also notice how the buildings seem to be leaning to the right and there is no movement of the image considering it is being filmed from a helicopter.

When played side by side, the truth speaks for itself.

By the way, all governments are in on the conspiracy… as are all media houses the world over who have so successfully kept the lie going for 19 years.

And for the record… ”conspiracy theory” does not mean “made up story” as some people out there seem to think… a conspiracy merely describes an act as being planned and executed by more than one person… ex: several people “conspired” to rob a bank.

One person alone would have had a hard time pulling off 9/11, so I think one could safely call it a conspiracy, in fact… a massive conspiracy.

Must see:  How they made the “Doctored”, deceptive video:

Only 5 minutes long and well worth watching.

- So, if there were no planes… what brought the Towers down?

Dr Neils Harrit, a chemistry professor from the University of Copenhagan found military grade nano-thermite explosive material present in the dust samples taken from ground zero. The nano-thermite he found was in both the reacted and un-reacted forms.

By Dr Harrit’s calculations, tons of it would have had to have been placed strategically in advance in order remove the steel supports and have the building fall in it’s own footprint at free-fall speeds. The nano-thermitic ignition reaction can INSTANTLY produce heats in excess of 4000°F! More than hot enough to instantly melt steel, wouldn’t you agree?

In fact they used more nano-thermite than needed to bring the buildings down and it continued reacting for a whole six weeks later. Nobody could approach ground zero because of the molten metal and the heat it produced.

“Dr. Ed Ward has documented what he believes is the use of micro-nukes on the World Trade Center complex attack that took place in September of 2001.

Massive steel beams were bent like pretzels as the towers collapsed.”

“There are several published observations of molten metal in the basements of all three buildings, WTC 1, 2 (“Twin Towers”) and 7. For example, Dr. Keith Eaton toured Ground Zero and stated in The Structural Engineer, ‘They showed us many fascinating slides’ [Eaton] continued, ‘ranging from molten metal which was still red hot weeks after the event, to 4-inch thick steel plates sheared and bent in the disaster’. (Structural Engineer, September 3, 2002, p. 6.)” 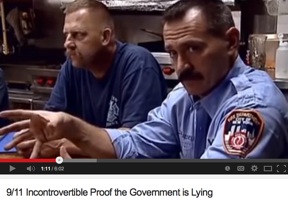 MUST SEE VIDEO: Incontrovertible Proof that we are being lied to about the presence of molten steel at ground zero.

How is it that Alex Jones and other alt-media “investigative reporters” haven’t discovered or reported the TRUTH?

It’s called “controlled opposition”. If you’re not sure what that means, look it up.

Alex Jones on the Howard Stern show, suppressing the TRUTH and admonishing “No-Planers”:

As long as the masses refuse to use their brains and believe whatever they are told or shown without thinking… we are done!

We will be brought down not by evil forces,

but by our own IGNORANCE!

Find out the truth about 911 here:

Google algorithms down! Best 911 post ever back up! Amazing photos and videos. Share and mirror before it disappears again!