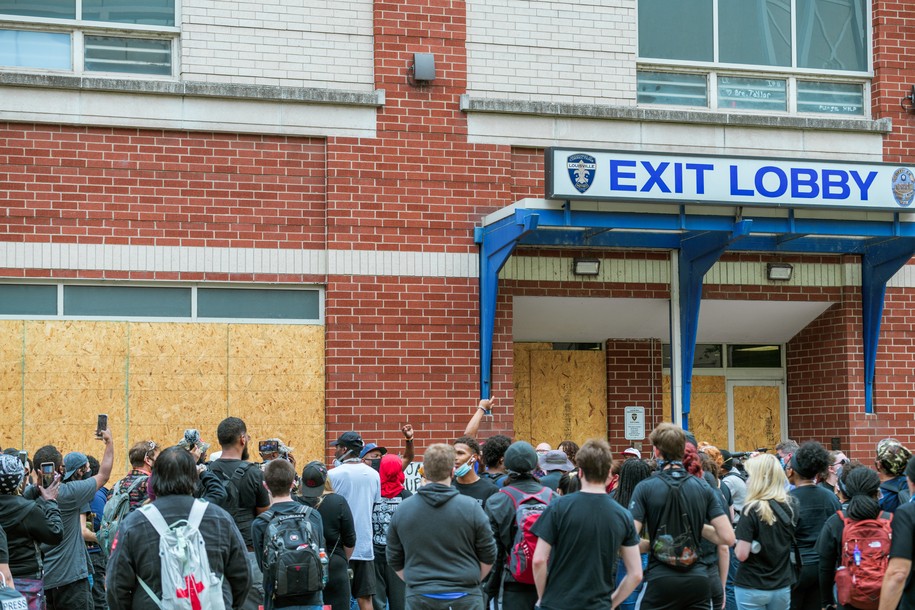 Protesters gather in front of the Metro Department of Corrections and demand the release of jailed demonstrators on September 24, 2020 in Louisville, Kentucky.

Hours before the unjust and heartbreaking Kentucky grand jury decision not to file charges against the officers who killed Breonna Taylor, Sgt. Jonathan Mattingly, one of the officers involved in the shooting, wrote an email defending his actions. Mattingly criticized the mayor and defended his and his colleagues’ actions, which resulted in shooting Taylor eight times while she was in her bed. Instead of discussing the email Tuesday during a press conference, the Louisville Metro Police Department (LMPD) dismissed it as “premature” and as an incident that would be investigated later on.

But Mattingly isn’t the only one from the LMPD who has written an outrageous email connected to the incident. An inappropriate and racist email sent by a Louisville police major in August resurfaced Tuesday. In the email obtained by the Courier Journal, Maj. Bridget Hallahan spouted that the people who are part of the antifa and Black Lives Matter movements are not only “punks,” but the same people who will be washing officers’ cars, checking them out at WalMart, and living in their parents’ basements “for their entire life.” Hallahan serves as commander of the department’s Fifth Division; prior to that role, she overlooked the department’s training division. Screenshots of her email went viral on Twitter Tuesday.

Maj. Hallahan was relieved of her command, Interim Police Chief Robert Schroeder announced on Friday. Her Oct. 1 retirement doesn’t appear to be impacted.

“I want LMPD majors who say that we’re the ones out here washing cars or checking you out at Walmart — no we’re not.” Baker said during a press conference at Louisville’s Jefferson Square Park. “We’re lawyers. We’re businesspeople. We’re city employees just like you.”

“And guess what,” she added, “even if I was washing your car, it doesn’t matter, I have a right to use my voice.”

The email begins: “I know it is hard to keep our thoughts and opinions to ourselves sometimes, especially when we, as a whole or as an individual, become the target of people in the public who criticize what we do without even knowing the facts.”

“These ANTIFA and BLM people, especially the ones who just jumped on the bandwagon ‘yesterday’ because they became ‘woke’ (insert eye roll here), do not deserve a second glance or thought from us. Our little pinky toenails have more character, morals, and ethics, than these punks have in their entire body.”

Hallahan also claimed that officers and their families were being “doxed” for speaking the truth and encouraged officers to come to her office to “bitch about it” if needed.

“Do not stoop to their level. Do not respond to them. If we do, we only validate what they did. Don’t make them important, because they are not. They will be the ones washing our cars, cashing us out at the Walmart, or living in their parents’ basement playing COD [Call of Duty] for their entire life,” Hallahan wrote.

Messages like this only makes the situation worse And there is dignity in washing cars and working at Wal Mart. Acting like those who have those jobs are lesser is unacceptable from a police officer

How frustrated is @LMPD? A law enforcement source got me this August message from Maj. Bridget Hallahan to 5th Div. (Highland) officers calling protesters “punks” who “will be the ones washing our cars, cashing us out at the @Walmart or living” with their parents. #BreonnaTaylor 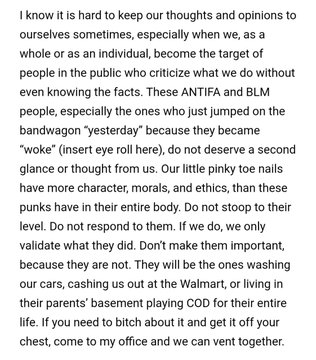 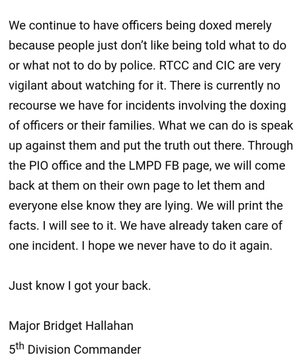 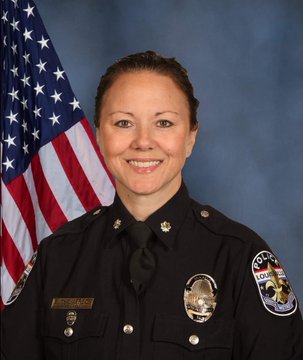 While the department did not comment on the email, local politicians shared their thoughts with the Courier Journal. Metro Councilman Brandon Coan said that the email was “shocking” because it seemed “out of character” for Hallahan. “I’m disappointed,” he told the Courier Journal. “I think it’s a totally unacceptable attitude of any police officer and extremely poor leadership from a major. I think she owes the community an apology and she’ll have to deal with the consequences of her conduct.”

Councilman Bill Hollander, whose district is also covered by the Fifth Division, didn’t believe an apology would be enough and suggested that Mayor Greg Fischer remove Hallahan from her position.

“I think it hurts the entire department,” he said in reference to the email. “It’s making constituents wonder what kind of people we’re really employing and promoting to leadership positions. And that’s very unfortunate. Our police officers have a very difficult job and they don’t need this kind of inappropriate communication.”

Hallahan confirmed to NBC News on Thursday that she sent the email, and that officers have been “supportive.” She also told the outlet that she retires in six days.