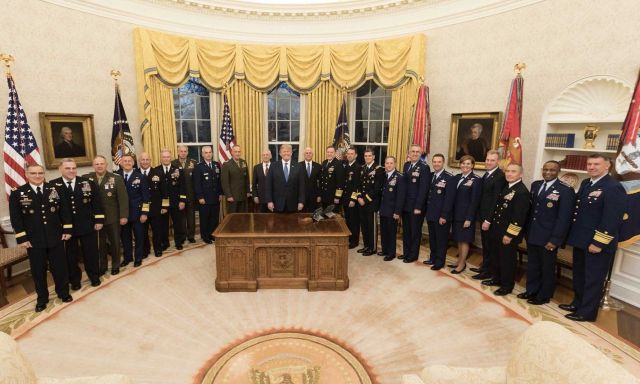 President Donald Trump has ordered a substantial reduction in the staff of the National Security Council, according to five people familiar with the plans, as the White House confronts an impeachment inquiry touched off by a whistle-blower complaint related to the agency’s work. Some of the people described the staff cuts as part of a White House effort to make its foreign policy arm leaner under new National Security Adviser Robert O’Brien. The request to limit the size of the NSC staff was conveyed to senior agency officials by acting White House Chief of Staff Mick Mulvaney and O’Brien this week. The whistle-blower complaint, focused on Trump’s conduct in a July 25 phone call with Ukrainian President Volodymyr Zelenskiy, has been followed by damaging reports on the president’s private conversations with other world leaders. The New York Times has reported that the whistle-blower was a CIA officer who was at one point detailed to the White House. The complaint has become the driving motivation behind House Democrats’ impeachment effort, which House Speaker Nancy Pelosi began last week. Two of the people familiar with the decision to shrink the NSC insisted it was largely rooted in both the transition to O’Brien’s leadership as well as Trump’s desire to increase efficiency at the agency, which grew under former President Barack Obama. About 310 people currently work at the NSC. All of the people asked not to be identified because the plan to reduce the NSC’s size hasn’t been made public. Late Friday, Trump re-tweeted an allegation that the whistle-blower was a CIA official who had been assigned to the NSC under President Barack Obama. Bloomberg News has not verified that assertion. The reductions will primarily be carried out through attrition, as staffers return from assignments at the NSC to their home agencies, the people said. Many people who work at the council are career government professionals detailed from the Pentagon, State Department, and intelligence agencies. Members of Congress have periodically sought to reduce the size of the NSC in recent years. Some lawmakers have threatened to make the national security adviser a Senate-confirmed position if the administration didn’t reduce the number of people working at the president’s foreign policy shop. Created under President Harry Truman in 1947, the NSC is an interagency panel designed to provide the president with subject-matter experts who can offer advice on foreign policy. O’Brien took over the NSC last month after his predecessor, John Bolton, departed the administration after high-profile disputes with Trump and Secretary of State Michael Pompeo over Afghanistan, North Korea and other matters. There was also frustration among some West Wing officials about perceptions the NSC was leaking information to benefit Bolton. Earlier this week, O’Brien appointed Alex Gray, formerly the National Security Council’s Oceania and Indo-Pacific security director, to be a senior adviser, according to three people familiar with the plan. Gray’s appointment follows that of Matt Pottinger, who is now deputy national security adviser after serving previously as the NSC’s senior director for Asia. Pottinger, a former journalist and Marine who joined Trump’s National Security Council in 2017 and later became senior director for Asia, has been deeply involved in U.S. talks with North Korea over its nuclear weapons program, and helped to plan Trump’s meetings with the country’s leader, Kim Jong Un.

U.S. Marines reserve units activated for “emergency within the United States” which “will come with little warning” – cites “threats in the Homeland” – NaturalNews.com

(Natural News) BREAKING NEWS UPDATE concerning a directive involving the United States Marine Corps reserve units via MARADMINS number 550/19, signed on Oct. 3, 2019, authorized by Brigadier General Daniel L. Shipley, Director, Manpower Plans and Policy. Notably, Brigadier General Daniel L. Shipley was nominated by President Trump for the rank of major general, according to a Jan. 16, 2019 Defense.gov press announcement. Before serving in his current role, Shipley served as the deputy director, Program Analysis and Evaluation, Department of Programs and Resources for the U.S. Marines. This new order is summarized as, “MARINES ORDERED TO ACTIVE DUTY ISO DEFENSE SUPPORT OF CIVIL AUTHORITIES.” (The term “ISO” means In Support Of.”) (See full text of the order here.) Note: There is disinfo being circulated about this order, claiming it was cancelled, but the cancelled order is 300/14, not 500/19. In fact, this new order 500/19 replaces a lot of previous orders, reestablishing the urgency of the situation and making sure any action to defend the Homeland is authorized by orders that are in good standing. Many observers are concerned that with Democrats like Rep. Tlaib openly talking about which prisons to use for imprisoning President Trump and his cabinet, and with Hillary Clinton positioning herself to run for president, and with the IG’s FISA abuses report set to drop in a few weeks, the deep state Democrats have reached a point of desperation where they may attempt to initiate a “hot coup” (kinetic engagement, arrest or execution of the President and his Cabinet) to avoid going to prison themselves. Sponsored solution from the Health Ranger Store: Lab-verified Nascent Iodine solution is a dietary supplement that provides your body with supplemental iodine to help protect your thyroid during radiation exposure. Nuclear accidents such as Fukushima (or nuclear war) can expose your body to radioactive iodine-131, a dangerous radioisotope. Pre-loading your system with stable iodine occupies the iodine receptor sites on your organs, causing your body to naturally expel radioactive iodine you may have been exposed to through air, food, water or milk products. This defensive strategy is recommended by nearly all health authorities, worldwide, including the Nuclear Regulatory Commission. Discover more at this link. The entire CIA-run deep state media (i.e. Washington Post, NYY, CNN, etc.) are all in on the effort and now gaslighting the entire nation with ginned up “whistleblower” schemes that are wholesale fabrications.

I spoke on the phone with Alex Jones today about this breaking news, and he told me, “I talked to a high level Trump confidant concerning what Trump would do if the deep state attempted an illegal coup. Trump said they would call out the marines and surround the White House, then legally and lawfully pursue the originators of the criminal coup.” This high-level confidant is someone who is very close to the President, and who is familiar with the President’s plans for how to deal with any attempt by the deep state to carry out an illegal coup attempt. We urge all lawful, pro-America organizations and individuals to prepare to defend your President against an illegal coup attempt in the coming weeks or months.

Does the following order describe an activation of U.S. Marines reserve units to prepare for an anticipated hot coup attempt against our President? While some might downplay the order as a routine personnel organization directive, you can read the highlights here and decide for yourself. The highlights of the order (order # 550/19), found at this Marines.mil link, are as follows: (bold emphasis added) (you can also try this direct link to see if it’s responding) ORDER TO ACTIVE DUTY TO PROVIDE ASSISTANCE IN RESPONSE TO A MAJOR DISASTER OR EMERGENCY. TOTAL FORCE MOBILIZATION, ACTIVATION, INTEGRATION, AND DEACTIVATION PLAN (MAID-P). In accordance with (IAW) REF A, this MARADMIN provides guidance for the activation of Reserve Component (RC) Marines under §12304a, Title 10, U.S. Code, following a request for Federal assistance in response to a major disaster or emergency within the United States.  Requests for Federal assistance will come with little warning.  As required, the Marine Corps must rapidly mobilize RC units and personnel IAW this MARADMIN in order to respond to threats in the Homeland. This order specifically references the President of the United States as the commanding officer: SECNAV’s delegated authority may be exercised only after: (Note: SECNAV means Secretary of the Navy) …2.B.2.  When directed by the President in support of (ISO) a request for assistance (RFA) from a primary Federal department or agency… This order also invokes the “Marine Emergency Preparedness Liaison Officer (EPLO)” as well as a large contingent of U.S. Marines forces: USNORTHCOM and USINDOPACOM requests EPLO activation through its USMC service component, Marine Forces North (MARFORNORTH) and Marine Forces Pacific (MARFORPAC). COMMARFORNORTH/COMMARFORPAC should consider using on hand Active Component (AC) and Active Reserve (AR) personnel to meet immediate IA requirements. The order also appears to underscore something called, “involuntary activation authority” as explained here: RC personnel can be sourced from the Individual Ready Reserve (IRR) or Individual Mobilization Augmentee (IMA) program with the involuntary activation authority residing with SECNAV and SECDEF. 4.C.3.  Ensure coordination is conducted with MARFORPAC and MARFORNORTH regarding the expected or planned RC IA mobilizations either in a voluntary or involuntary status. 4.C.6.  As required, act on delegated SECNAV authorities for volunteer mobilization orders under §12301(d) for the initial 72 hour Immediate Response Authority period IOT facilitate a rapid time-sensitive response.