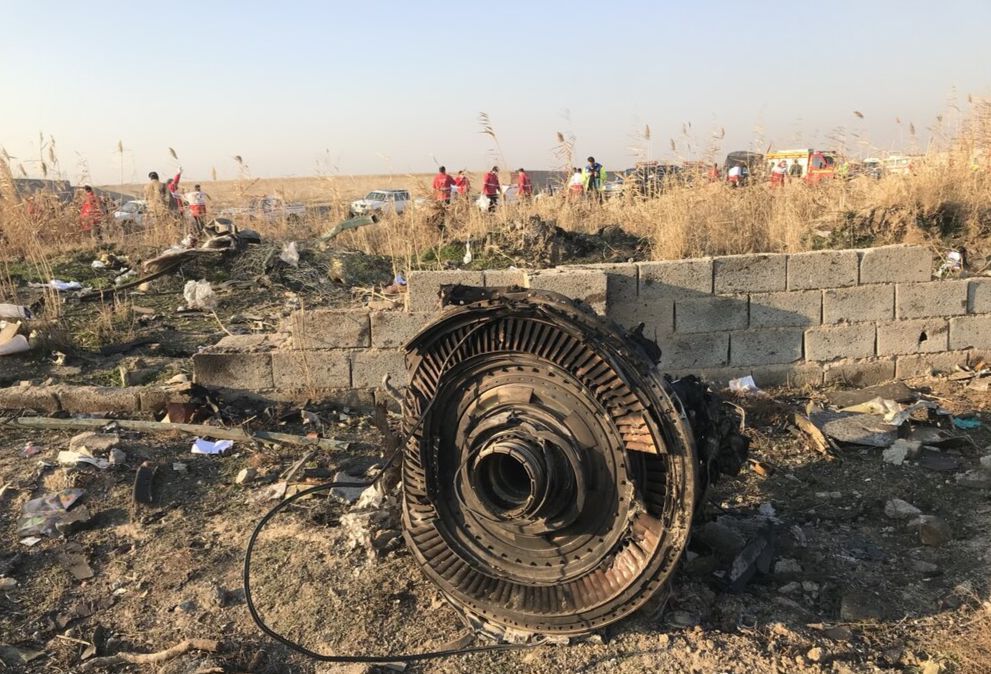 Re: Ukrainian Flight PS752, we must consider whether the US hacked the Ukrainian plane transponder to provoke Iran into shooting down this passenger jet. Above: wreckage from the jet. Image credit: Wikipedia

There is more to the story about Ukrainian Flight PS752

which Iran accidentally shot down on January 8th – right after the US (with Israel’s help) had assassinated Qassem Soleimani. Here is the cardinal rule about government—everything it says through its spokespersons, hired guns, public relations adepts, and the mockingbird corporate media should be considered a self-serving lie, or at best a distortion hammered into shape to fit a predefined agenda. For instance, we should question who is ultimately responsible for the shootdown of the Ukrainian airliner in Tehran following the assassination of Qassem Soleimani.

Former CIA military intelligence officer Philip Giraldi believes there is a possibility Ukraine International Airlines flight PS752 was a false flag designed to put further pressure on the government of Iran and feed the USAID “opposition” to the mullahs.

Giraldi writes “there just might be considerably more to the story involving cyberwarfare carried out by the U.S. and possibly Israeli governments.”

What seems to have been a case of bad judgements and human error does, however, include some elements that have yet to be explained. The Iranian missile operator reportedly experienced considerable “jamming” and the planes transponder switched off and stopped transmitting several minutes before the missiles were launched. There were also problems with the communication network of the air defense command, which may have been related.

…SA-15 Tor defense system used by Iran has one major vulnerability. It can be hacked or “spoofed,” permitting an intruder to impersonate a legitimate user and take control. The United States Navy and Air Force reportedly have developed technologies “that can fool enemy radar systems with false and deceptively moving targets.” Fooling the system also means fooling the operator. The Guardian has also reported independently  how the United States military has long been developing systems that can from a distance alter the electronics and targeting of Iran’s available missiles.

Naturally, this possibility is not even mentioned by the corporate war propaganda media, with the notable exception of The Guardian. Instead, we are pelted with tweets and news articles purporting to show just how angry the Iranian people supposedly are over the shootdown, accidental or otherwise.

Kimia Alizadeh, the only Iranian woman to win an Olympic medal, announced that she had defected. She is part of growing public outrage in Iran after the military admitted to shooting down a Ukraine International Airlines jet. https://t.co/NkwtCTP0yw

The establishment media, long-serving as war propagandists, would have you believe the people of Iran care more about the shootdown of an passenger airliner than the four-decade long  economic war against them waged by the USG, Israel, and Saudia Arabia—a war that has the possibility of breaking out into a conflict that will kill far more than the 176 who died when two missiles hit flight PS752.

This reminds me of a murderous trick pulled by the Israelis. In September 2018, Syrian anti-aircraft defenses shot down a Russian military plane near the Hmeimim airbase where the Russians stage military operations against USG supported terrorists in Syria (and invited, along with Iran and Hezbollah, to do so by Syria, unlike the illegal American occupation and the apparently endless Israeli air raids).

“A Russian military spokesman said Israeli F-16 pilots were using the Russian plane as a shield while carrying out missile strikes against targets in Syria’s Latakia province and put it in the line of fire from Syrian anti-aircraft batteries,” The Guardian reported at the time.

Russia’s defence minister, Sergei Shoigu, told a senior Israeli official that Israel bore “full responsibility” for the incident and the death of the Russian crew, a military spokesman said later on Tuesday. Israel’s ambassador in Moscow was summoned to the Russian foreign ministry over the incident.

Putin let it go, however, realizing that pushing the issue too far would worsen the conflict and possibly result in further Russian causalities.

Such caution, however, cannot be attributed to the USG and certainly not Israel. Bibi Netanyahu, the Israeli PM, said Bashir al-Assad and the Syrians were solely responsible for the attack.

No such caution or diplomacy can be expected from the USG and its current loudmouth know-nothing president, Donald Trump. The death of nearly two hundred people is simply an excuse to whip up hysteria and push forward the covert war against Iran.

First and foremost, when you read the “news” dispensed by the war propaganda media, you should assume, unless otherwise proven and verified independently, that what they say about Iran and the Middle East is nothing less than a carelessly and hastily assembled pack of lies, distortion, and omissions, all designed to destroy Iran and kill thousands, possibly millions of innocent men, women, and children.

The post Propaganda and Lies: Iran and Ukrainian Flight PS752 appeared first on The Freedom Articles.

Loading...
"Not by might, nor by power, but by my spirit, saith the Lord of hosts." Zechariah 4:6
Read it..
BEFORE IT'S NEWS
SIGN UP FOR OUR NEWSLETTER
Today's Top Stories
Sarah Westall: Whistleblower Brutally Beaten, Coronavirus Explained From Chinese Healer, Hired Mercenaries
The Dollar Will Collapse Within Weeks! What Will Replace It? - Must See Video!
Q: Hollywood Is Burning! Is Barron Trump Q? Barry's Belated Impeachment? Best Is Yet 2 Come! - Great Video
Jason A - Unexplainable Events Happening in 2020!
The History And Mission Of The Nazi-Illuminati Bush (Scher(f)f) Crime Family
David Abel Exposed As Crisis Acting Freemason On Board Diamond Princess Cruise Ship
Mark Taylor: Q! Gloves Are Off, Fight Is On
Billy Meier Predictions and Prophecies Are Now Being Proved Correct
Q3649: It's Going to Be Biblical! An Epic Response to Mayor Pete Saying We Can't Be Christians! Great Video!
Worldwide Virus Alert! Millions Infected & Spreading! - Must See Video!
Loading...
Featured
Bill Whittle: Four More Years Wishlist: Why President Trump Must Be Reelected
"TURN OFF YOUR CAMERA and STEP OUT OF THE CAR" New York State Extortion Stop
Health Officials Prepare For COVID-19 Throughout USA.
Did a Senior Chinese Military Intelligence Officer Call the Coronavirus a Hoax or Did Dean Koontz Write A 'Novel' Virus Sequel?
The 5G Trojan Horse: What You’re Not Being Told
‘Whom the gods would destroy – they first make mad’ – COVID-19 Hysteria goes global
🚨CORONAVIRUS: Who is Paul Cottrell; an embedded Gov’t Plant / Agent, Zionist Schill (“Snake in the Grass”)?
Whistleblower found dead
Q: You Have Come Far, Anons (Patriots)! You Are Ready! A Public Awake Is Their Greatest Fear! - Great Video
US Now Admitting Coronavirus Has Broken Containment Beyond China! - Great Video!