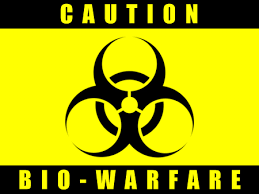 Whose fingerprints are on the coronavirus?

As the coronavirus took global flight, Dr. Anthony Fauci, director of the National Institute of Allergy and Infectious Diseases at the National Institutes of Health, made a startling revelation. He warned it is at least 10 times deadlier than the seasonal flu. But it is biological warfare (BW) expert professor Francis Boyle’s interview that details what may well have led to coronavirus having such a powerful punch.

Boyle explains the concept of “gain of function.” This is work that involves activating genetic mutations to more strongly enhance their impact. In layman’s terms it is the equivalent of placing a virus on steroids. He details evidence as to how it may well have come into play to increase the lethality of the virus. As China and the U.S. play the blame game as to who is responsible for the pandemic, Boyle names names, explaining that several different sets of fingerprints were involved.

The BW expert is clear at the outset there is little doubt the coronavirus now touring the globe came out of China’s biowarfare lab in Wuhan. Regardless of what the Chinese government says in its efforts to cloud the issue to focus responsibility elsewhere and regardless of assertions by American liberals we are racist for calling it such, the release of coronavirus bears a “made in China” stamp. However, Boyle’s investigation also reveals that others linked to various stages of development of the virus must share some responsibility as well.

Boyle tells us he has definitive evidence a biowarfare lab at the University of North Carolina (UNC) was the initial catalyst for the virus. He had criticized the lab earlier for its “gain of function” work. He condemns UNC for its DNA genetic engineering “on every hideous biological warfare agent you can imagine, including MERS (Middle East Respiratory Syndrome), an agent which, again, is a bio-warfared coronavirus.” In the interview, Boyle read from a study underscoring what the UNC lab project had discovered: “A SARS-like cluster of circulating bat coronaviruses shows potential for human emergence.”

Shockingly, the study noted involvement in the project not only by UNC researchers and FDA representatives but also by “Zhengli-Li Shi, Key Laboratory of Special Pathogens and Biosafety, Wuhan Institute of Virology, Chinese Academy of Sciences, Wuhan, China.” Acknowledging the National Natural Science Foundation of China at the study’s end made it clear the coronavirus technology was not stolen by China but Beijing had paid UNC to have one of its top BW experts involved in the project.

Boyle holds back no punches in his criticism. He states the university “took dirty money from China” to allow a top Chinese biowarfare expert “to work with them to give gain of function biowarfare DNA genetic capability to SARS, which is dangerous enough to begin with. … It is clearly a smoking gun; clearly that laboratory must be shut down immediately and all those scientists investigated by the United States government for this and their responsibility here and for violating my Biological Weapons and Terrorism Act of 1989.” (Boyle helped draft this document, which today is international law.)

Boyle adds the virus was designed “to infect human beings by their airways and then … in vivo. … So, they’re using the gain of function technology” to make sure it spreads quickly. “Together the data confirmed the ability to infect human airway cells, etc. They know exactly what they are doing here. … It’s weaponized coronavirus. They also conclude that they really couldn’t find an antibody against it.”

Boyle pointed to a footnote in the study stating, “Cells were originally obtained from Fort Detrick,” which means our own U.S. government biowarfare resources were involved. But while greed may have been the university’s incentive for involvement in the project, what incentivized U.S. participation?

Boyle drops a bombshell at this point, revealing all the BW work was approved and funded by President Barack Obama’s National Institutes of Health – the same agency now involved in attempting to stop the spread of the virus it helped wrought.

As it turns out, there also are Australian fingerprints involved. Boyle reported in 2010 that a science journal indicated Wuhan, with Aussie government approval, was working with an institution to genetically engineer DNA into a super bio-weapon involving SARS and HIV. The project met with success.

This may well be why China recently told the U.S. to “correct its mistakes” concerning the origin of the virus. A day after President Donald Trump described coronavirus as the “Chinese Virus” on Twitter, Beijing responded, “We express strong indignation and objection to such stigmatization.” But obviously, China finds itself on the horns of a dilemma about detailing development of the virus. After all, despite some U.S. and Australian government participation, the Chinese were the ones ultimately putting it all together and, in the end, responsible for its accidental release.

Boyle concluded with the following:

When asked how the virus was released, Boyle believed it was by accident. Two Chinese scientists concluded the Wuhan lab was the release site, probably by someone unknowingly infected, due to the lengthy incubation period, who then spread it around before realizing he was sick.

If Boyle’s assessment is accurate, there are a lot of questions needing answers. Did UNC’s research, as Boyle suggests, violate international law? Was it simply greed motivating the university to undertake this project? And, even if intentions were purely scientific, how could academicians from a leading university and in Australia not recognize what China intended to do with the virus? Any rational Western researcher should have realized China was effectively being given a loaded BW gun to, eventually, point at us.

As we bear witness to the global havoc on a number of levels coronavirus is creating, it may be a blessing in disguise we are confronting it now rather than later as intended by China in some future confrontation.

Stunning Intel! Here’s What No One Else Will Tell You | MIT PhD Reveals Sinister Theory About COVID-19! | Here’s How I Know That the ‘C-Virus’ Is a Set-up (Videos) click here