“We’ll cut off the whole relationship” Donald Trump threatened China in a recent Fox-Business interview, suggesting he may cut diplomatic relations with China and thereby saving the US $500 billion dollars.

He didn’t say how, though.

Mr. Trump’s anger referred to what he calls China’s “mismanagement” of the corona crisis.

This is consistent with the new China bashing hard line being pushed by his administration.

“I’m very disappointed in China,” Trump said during the same Fox interview. “We asked to go over and they said no,” he continued, referring to the Centers for Disease Control and Prevention’s (CDC) February offer of assistance to the virus-stricken city of Wuhan.

“They didn’t want our help. And I figured that was OK because they must know what they are doing. So, it was either stupidity, incompetence or deliberate.”

These are strong and unsubstantiated words, since there has never been a clearly documented accusation against China in how precisely China mismanaged the COVID-19 outbreak and is supposedly responsible for the COVID crisis in the US where real mismanagement, corruption, conflict of interest and particularly pharma-interests, competing private vaccine company interests are written all over the walls, the walls of shame, falsifying corona statistics, by falsifying death certificates, paying hospitals for declaring any patient a COVID-patient, even if many of them aren’t, and for using ventilators, though it is widely known that ventilators are causing death in 60% to 80% of patients.

He also knows about the real mismanagement of the crisis in his country, the United States.

But he has always been good at self-promoting propaganda and slandering perceived enemies, as long as he thinks it may help him being reelected.

It is obvious that the US China bashing has nothing to do with China’s “mismanagement” of the corona epidemic, but rather with China’s bold move a step further away from the dollar-economy, by:

This is mostly to prevent US interference in international monetary transactions and also in response to the United States’ threat of cutting off Chinese supply chains.

The cutting off supply chains is, of course, sheer bluff, as literally 80 percent-plus of US industries depend in one way or another on supplies from China.

This dependence is particularly significant in medical supplies, where the US depends for 80% to 90% on China.

But China is China, and President Xi acted fast calling the bluff and the US may suddenly stand there with an empty cup, since such supply chains are not replaced overnight.

In the first quarter 2020, ASEAN countries have become China’s largest trading partner with 15.1 %, outpacing the European Union (EU). Trade with South Korea and Japan amounted to another 13.7%, bringing the total close to 30%. Adding China’s trade with Russia, another at least 15%, is getting close to a 50% tipping point of China’s closest partners abandoning commercial transactions in US-dollars.

In these cities it has almost universal acceptance; i.e., for salary payments, public transportation, food and most retail shopping.

The use of digital money is nothing new in China.

Today about 90% of all monetary transactions are electronic, for example, through WeChat and AliPay, but they do not replace the existing cash currency.

Commodity pricing today, mostly dollarized, will be priced by China in yuan and traded in crypto-yuan.

Yuan pricing for commodities, such as gold, crude oil and iron ore, has already started.

As China is recovering from the pandemic more quickly than the rest of the world, relatively high-returning yuan-denominated investments and commodity assets will become more attractive.

The non-interference factor of a Chinese Central Bank backed crypto-currency is an additional security element that will further boost the Chinese Yuan as a reserve currency.

Already now, countries around the globe are sick and tired of US meddling in their international transactions and especially with US sanctions – that may come at a whim – every time a country demonstrates her sovereignty or disobedience to US dictates.

This leads many countries that may not speak out publicly for fear of sanctions to gradually and quietly divesting their dollar holdings into Chinese yuan.

A tipping point may be reached when about 50% of world trade and world reserves are denominated in yuan.

At this point it would be likely that the worldwide dollar hegemony will be no more, as it may be displaced by the yuan.

Several leaders of countries were killed for attempting to replace the dollar for trading with other currencies.

For example, Saddam Hussein, for his intent to use the euro for trading Iraq’s hydrocarbon riches, and Libya’s Gadhafi, when he wanted to introduce the Gold-Dinar as a Pan-African trading currency, thereby freeing Africa from western monetary slavehood.

As we all recall, he was literally lynched by NATO on 20 October 2011, at the initiative of Hillary Clinton with the strong support of then French President Sarkozy.

By the way, this western monetary stranglehold on Africa prevails as of this day – a new-old kind of colonization, nobody in the western mainstream reports on.

Once the new e-RMB (yuan) has been successfully tested locally it will be launched internationally.

While China’s new PBC-backed cyber-currency’s internationalization will make the yuan even more attractive among trading partners, and also as a reserve currency, China may simultaneously divest its huge reserves of US Treasury bonds (about US$1.2 trillion) into purchasing assets abroad paid in US-dollars.

The Belt and Road investments maybe a suitable vehicle to reduce dollar holdings at home.

In the current high corona debt-crisis around the world, especially the Global South, China may also consider a program of Debt Jubilee (debt forgiveness) to the poorest partner countries which may be already, or potentially be, future Belt and Road associates.

At present and since October 2016, the Renminbi (Chinese yuan) is part of a 5-currency basket at the IMF that constitutes the Special Drawing Rights (SDR), the world’s ultimate virtual reserve currency.

This currency allocation to the SDR is disproportionate with regard to the economic strength of the respective countries, especially China, the world’s second largest economy, rapidly moving towards first place.

China may want to vigorously renegotiate with the IMF her currency proportion in the SDR, as well as reviewing country quotas which by now are out-of-line with member countries’ economic weight.

An IMF capital increase is overdue.

The IMF capital base today is SDR 477 billion (US$ 677 billion). In addition, there is the temporary New Arrangement to Borrow (NAB) which in January 2020 has been doubled to SDR365 billion (US$ 475 billion), a total resource-base of about US$ 1.15 trillion.

Yet, the IMF already today foresees US$ 1 trillion for additional corona debt lending and debt forgiveness. Since the NAB is only a temporary arrangement, a quota increase and review; i.e., a proper adjustment for China’s economy is more than overdue.

A quota adjustment in favor of China and the corresponding adjustment of the yuan’s proportion in the SDR basket would further enhance China’s currency vis-à-vis the rest of the world.

This coupled with an incorruptible cryptocurrency controlled by China’s Central Bank and possibly backed by gold, would be a formidable reserve currency that most countries would like as their chief reserve asset.

This, of course, is what Washington is afraid of.

It would clearly endanger and probably crush the global US-dollar hegemony.

The world would be a better place for it.

Therefore, the current China bashing and attributing guilt for spreading and mismanaging the corona virus is a sheer farce – a treachery of the world, a deviation of the real reason behind Trump’s attempt to demolish China’s reputation around the globe, namely by doing so, hoping to destroy the rise of China and the appreciation of the Chinese yuan, and thereby the yuan’s attractiveness as an investment currency for most of the rest of the world.

This is pretty similar to the real reason for the 2018-2019 US-China trade war, initiated by President Trump, had the objective of ruining the yuan’s reputation in the world arena.

Washington eventually quietly and unceremoniously lost the conflict over trade.

Despite Trump’s loud declarations to the contrary, the US needs China much more than vice-versa.

Just look at the Chinese supply chain which the west, in particular the US, cannot replace from one day to the other.

Preparations to orient towards Asian markets are in full swing.

China is enhancing relations with Asian markets; i.e., the ASEAN countries, plus Japan and South Korea.

Members of the SCO (Shanghai Cooperation Organization) are also a trading market China is already engaged in and may further strengthen it.

The SCO, in addition to China and most of the Central Asian countries, include also Russia, India and Pakistan – and Iran is waiting for imminent admission. thers, like Malaysia and Mongolia are in observer status and also slanted to become SCO members in due course.

The combination of SCO, ASEAN-plus 3, amounts to more than half the world population and accounts for more than a third of the world’s economic output.

This is a formidable global “market share” and will likely increase with every atrocity – military and economic – Washington is committing around the globe.

With her new crypto-currency, which eventually will be internationalized, China is well on her way to fully dedollarize, with the cyber-yuan replacing the US-dollar as the key trading and main reserve currency and to displace the United States as the world’s financial and economic hegemon.

The current China bashing does not prevent China from forging ahead with her economic activities – trade – and especially the unstoppable Belt and Road Initiative (BRI) via maritime and land routes, already counting on 160 partners (about 120 countries and some 40 multinational organizations) on four continents.

This revolutionary global development scheme will require trillions of yuans and dollars for investments.

It will also be generating trillions in revenues over time, shared with BRI partners. All towards a common future for mankind – a world moving towards an equilibrium with justice, harmony, and peace. 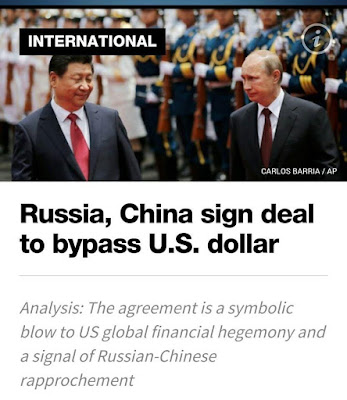 
Source: http://expotera-ceo.blogspot.com/2020/05/chinas-new-crypto-currency-first-step.html
Before It’s News® is a community of individuals who report on what’s going on around them, from all around the world.