Human Wrongs Watch
20 May 2020 (WMO)* — Tropical cyclone Amphan intensified rapidly in the Bay of Bengal to become a “Super Cyclonic Storm” – the equivalent of a strong Category 4/weak Category 5 on the Saffir Simpson scale. It weakened ahead of landfall on Wednesday 20 May as a very severe cyclonic storm (strong Category 2 equivalent), bringing dangerous winds, storm surge and flooding to coastal areas of West Bengal in India and Bangladesh.

Amphan (pronounced Um-Pun) impacted densely populated areas, including the Indian city of Kolkata (Calcutta)  at a time when restrictions due to the COVID-19 pandemic  is complicating disaster management – and making it more necessary than ever before.

The Indian Meteorological Department in New Delhi, which acts as WMO’s Regional Specialized Meteorological Centre for Tropical Cyclones, warned of a storm surge of up to 4-5 meters above astronomical tide that is likely to inundate low-lying areas of West Bengal during landfall, and of about 2.5 – 3.5 meters for Bangladesh.

The Bangladesh Meteorological Department for the first time introduced regular storm surge forecasts, thanks to work carried out by the WMO’s Coastal Inundation Forecasting project funded by USAID. 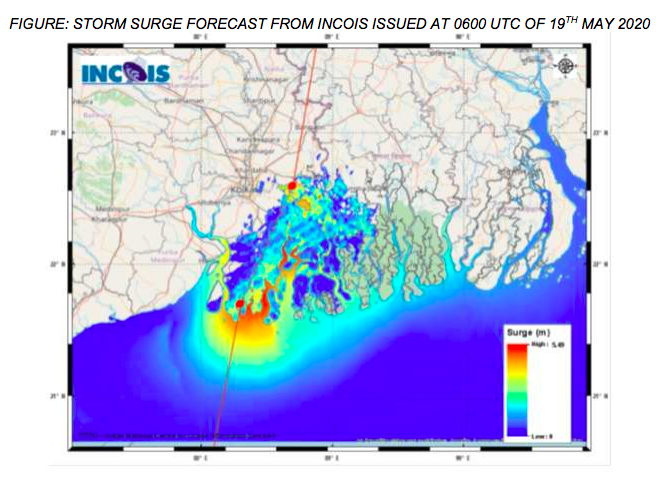 There were no immediate reports on the death toll. Both India and Bangladesh pursue a zero casualty policy.

One million people are being evacuated in India. Bangladesh could equal a new record for evacuations set last November in advance of Cyclone Bulbul, according to the UN Office For Disaster Risk Reduction.

“Communities are already vulnerable to the devastating health crisis and we know that if people are forced to seek communal shelter, they will be unable to maintain physical distancing and run the risk of contracting or transmitting the disease,” said the International Organization for Migration, which cited government statistics that, as of 18 May, five cases of coronavirus have been confirmed in the refugee population at Cox’s Bazar, based on 140 tests.

The tropical cyclone season in the Bay of Bengal and Arabian Sea has two peaks,  around May and around November and, in the past, the basin witnessed huge casualties. 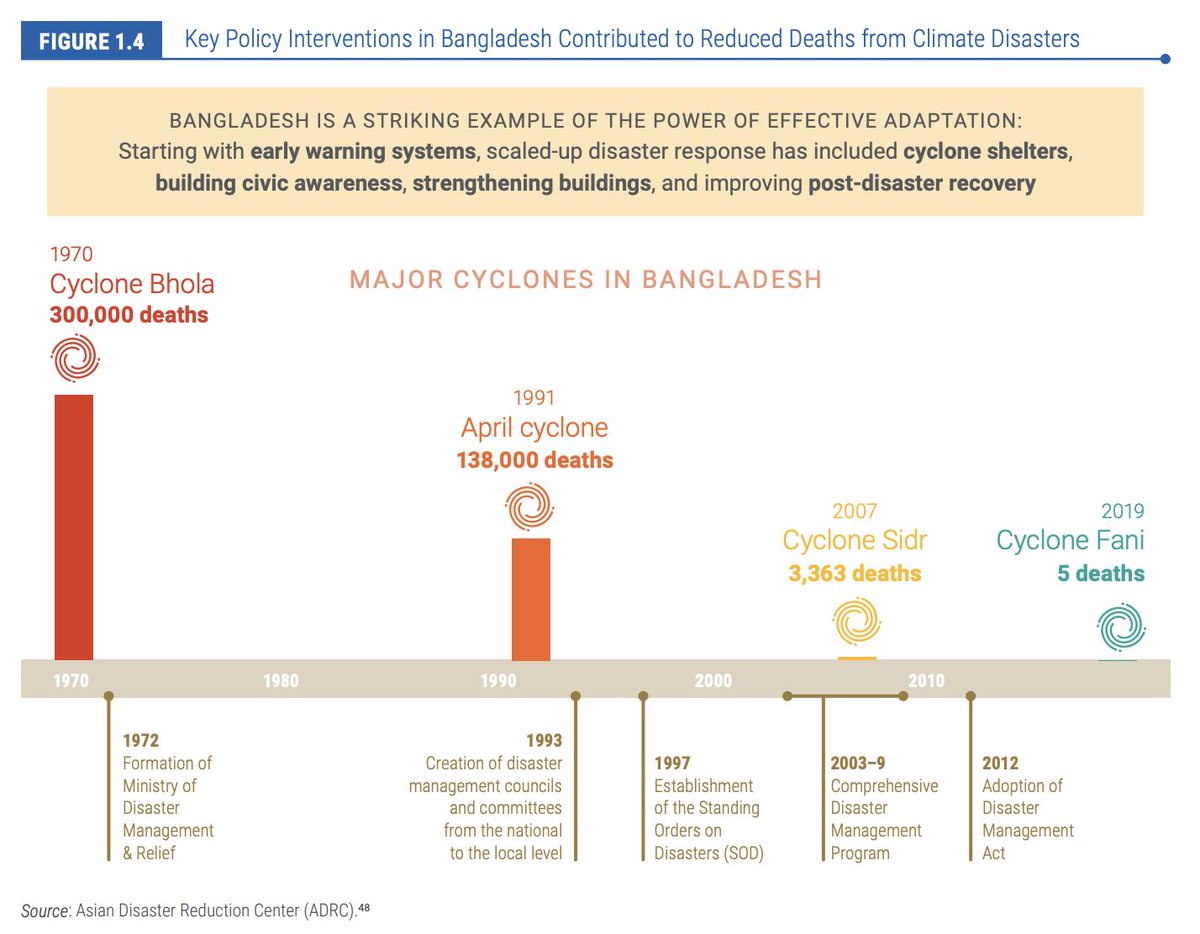 The deadliest tropical cyclone on record, the Great Bhola Cyclone in November 1970, killed at least 300,000 people in modern-day Bangladesh and led to the establishment in 1972, of a body in charge of the regional coordination mechanism for tropical cyclones, the WMO/ESCAP Panel on Tropical Cyclones

For instance, extremely severe cyclonic storm Fani made landfall in Odisha, India on 3 May 2019. Accurate advance forecasts and a huge, well-coordinated disaster risk reduction campaign, including the evacuation of hundreds of thousands of people, were credited with keeping the death toll to a minimum. This was in contrast to the 1999 Odisha cyclone which caused thousands of deaths in India.

Loading...
"Not by might, nor by power, but by my spirit, saith the Lord of hosts." Zechariah 4:6
BEFORE IT'S NEWS ON TELEGRAM
GET THE TELEGRAM APP - https://telegram.org/ JOIN OUR CHANNEL - https://t.me/BeforeitsNews
Read it..
BEFORE IT'S NEWS
SIGN UP FOR OUR NEWSLETTER
Today's Top Stories
Big Bombshell! Lin Wood Drops Whistleblower Transcripts Exposing VP Pence
X22Report: Deep State Is In The Process Of Destroying Itself! History Has Taught Us That People Will Rise! - Must Video
The Real President Donald J. Trump Story!
Anonymous: "People Don't Realize It's Actually Happening" Prepare Now!
Deborah Tavares: Cabal's Next Move A Deadly Fungus
Scott McKay Live "Patriot Streetfighter"'s Interview with Sheriff Mack! - Must Video
“This is a new Holocaust.” Death Rates Skyrocket in Israel Following Pfizer Experimental COVID ‘Vaccines’
New Monkey Werx: Wars & Rumors - 3.3.21 - Biblical News from Around the World
Sean Stone With Juan O Savin: America's Near Death Experience (Must See Video)
Trump Assassination Foiled, Deep State in Panic Mode!
Loading...
Featured
March 4th! Congress Canceled! DC Keeps 5,000 National Guard As Theory Claims Trump Will Be Inaugurated Today, Militia Will Attack
Texas Will Win The Battle Of History! Dems Outraged As Texas Stands Up To Their Narrative! - Must Video
March 4th in Front of the US Capitol Let’s See What’s Really Going on MustangMedic
How Satan Deceived Baby Boomers To Commit This Great Sin! David Heavener
Communist China Now Controls America’s Energy Grid, Thanks to Biden
DEMOCRAT House passes sweeping bill to CUT AND DEFUND POLICE
X22Report: The Economy Is Waking People Up To The Central Bank & The Deep State, Thanks Joe Biden & Nancy Pelosi! - Must Video
Here We Go Again!
Scott McKay - Patriot Streetfighter Post Election Update 58: Interviewing Mel K! - Must Video
Judge Rules on ELECTION FRAUD: 78% of Mail-In Ballots Fraudulent, Election RE-DO Ordered
Top Global
'He refused to be silent.' What a slain Pakistani religious freedom advocate can teach the world
Communist China Now Controls America’s Energy Grid, Thanks to Biden
What Rothbard's Defense of Religion Teaches Us about Resisting the Covid State
Operation Downplay, Conquistador Syndrome
Sean Stone With Juan O Savin: America's Near Death Experience (Must See Video)
This Is the Video to Watch: Infecting W/COVID Swab, the RNA Vaccine, Artificial Intelligence
Major Intelligence Update From Juan O'Savin (Video)
Diabetes Improvements Worth Knowing
Have You Ever Seen Red and Green Rains ? Strange Rains Happened Once on Earth
Swedish Professor Of Epidemiology Quits COVID Research After His Findings Undermine Political Arguments
Loading...
Top Alternative
EMBARRASSING! Watch: Biden’s feed CUT OFF right after he says he’s “happy to take questions”
Woke Educators Release Letter Declaring Objective Math a Form of ‘White Supremacy’
The Cult of Lucifer, Crimes Against Humanity, film by Robert David Steele and Sacha Stone
Time: Inside The Biden Administration’s Battle Against “Far-Right Extremism”
What Rothbard's Defense of Religion Teaches Us about Resisting the Covid State
Ancient Knowledge Foretells The Arrival of Extraterrestrial Visitors
People With Superpowers Caught on Tape in United States, Brazil, Russia and Japan
Operation Downplay, Conquistador Syndrome
Edward Snowden 2021 Will It Be MANDATORY?| It Is HAPPENING NOW!!
Those that deny the mass eugenics efforts that exist in the U.S. and globally today, are either pathological liars, are censorship driven manipulative propagandists, or are completely ignorant of any reality whatsoever