Human Wrongs Watch
6 June 2020 (UN News)* — With the climate crisis threatening coral reefs around the world, a researcher in Hawaii is part of a team pioneering new techniques to preserve living coral sperm and larvae, and ultimately save the biodiversity and genetic diversity of coral reefs not just in Hawaii but across the world.

ILO Photo/John Isaac | The UN estimates that estimates that about 25 to 50 per cent of the world’s coral reefs have been destroyed and another 60 per cent are under threat.
Preserving ocean life is a key focus of the 17 internationally-agreed Sustainable Development Goals or SDGs. UN News joined the International Labour Organization on a visit to Hawaii where many people are already living aspects of the goals or contributing to their realization in their everyday work. 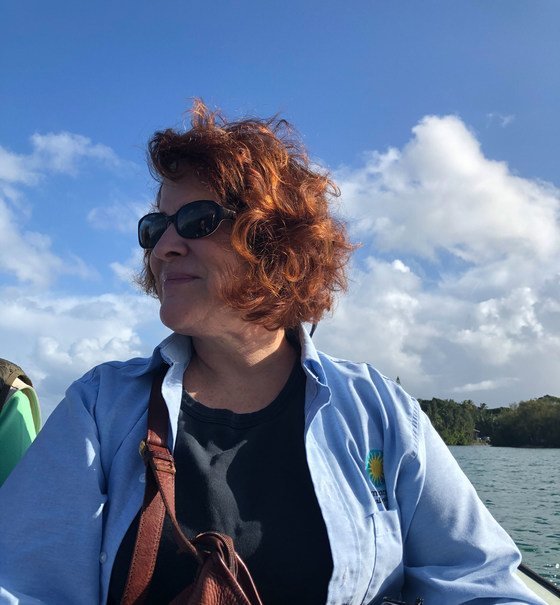 Mary Hagedorn is a senior research scientist at the Smithsonian Conservation Biology Institute, based at the Hawaii Institute of Marine Biology on Coconut Island in Hawaii., by UN News/Daniel Dickinson

Mary Hagedorn is a senior research scientist at the Smithsonian Conservation Biology Institute, based at the Hawaii Institute of Marine Biology on Coconut Island in Kaneohe Bay, Hawaii.

Her work takes her to the Great Barrier Reef in Australia, as well as the Caribbean, Pacific islands and Florida. In the hope of saving coral reefs, she and her team are adapting human fertility techniques, including cryopreservation (the use of very low temperatures to preserve living cells and tissues].

“Cryopreservation is a relatively new field of science founded in the late 1940s.  It was first used to preserve human embryos in the early 1980s and then human eggs at the end of the 90s.

At Coconut Island we have been working for the last 16 years on adapting those techniques to successfully preserve coral sperm and larvae to help restore reefs now, or potentially use them to reseed the ocean in the future.

Once frozen, the material is held in large thermos-like containers which can store them for hundreds of years in liquid nitrogen. We call them biorepositories. We’re really collecting the Book of Life for coral reefs and that’s significant, because it contains the genetic diversity and biodiversity of our coral reefs.

Coral are actually animals which create a skeleton with a thin veneer of skin on it, which is the coral animal. If you step on it, you can destroy the fragile coral. That’s why we don’t want people walking on reefs, because they basically destroy all of the tissue that is the coral.

The coral animal is actually a single polyp, so there can be thousands of animals on one piece of skeleton, although there are many different species with different sized coral animals.

Why coral reefs are critical for life on Earth

Coral reefs are important for life on Earth, as almost 25 per cent of all marine life lives on a coral reef at some point and so, without reefs, many species of fish that we eat wouldn’t exist. They also provide a natural protection for our coastlines, like here in Kaneohe Bay.

We’ve had a number of tsunamis, but the barrier reef took the impact and protected our homes. They are also important for many types of livelihoods through tourism and fishing, to name a few. Finally, corals are intimately involved in the process which helps green algae produce oxygen. These algae produce up to 50% of the world’s oxygen.

A lot of the conservation work that happens with coral now is around trying to restore and rebuild reefs that have been damaged.  People want hope, they want to see some kind of restoration, even if it’s not going to ultimately end up in building new reefs. It’s part of the psychology of engaging people in valuing and preserving wild species and places.

Creating new life in the lab

The Hawaii Institute of Marine Biology is unique; it’s a very sophisticated laboratory sitting on a coral reef here in Kaneohe Bay. It’s a great location, as we can take a small boat or even snorkel to three kinds of reef on our doorstep; patch, barrier and fringing reefs. So, it’s a lot easier to work here than, for example, at some locations along the Great Barrier Reef in Australia which requires an oceanographic vessel to collect coral samples.

Throughout much of the world, corals have a relatively restricted reproduction cycle, spawning or breeding just a couple days a year. So, we don’t have a lot of time to work. However, here in Hawaii, reproduction is a much more extended — we have almost three months for various species that spawn. 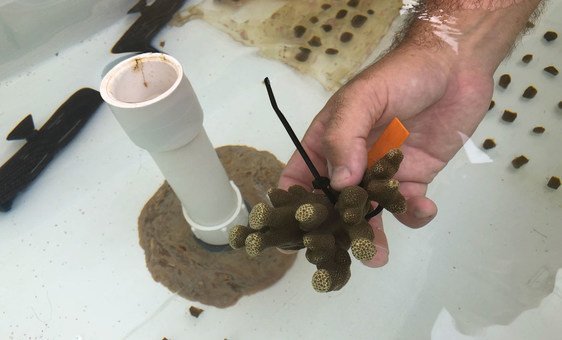 Corals are grown under controlled conditions at the Hawaii Institute of Marine Biology on Coconut Island in Kaneohe Bay., by UN News/Daniel Dickinson
.

What can we freeze? You can successfully freeze the sperm of most animals, so the very first thing we worked out was how to freeze the coral sperm, and we have built the necessary equipment to freeze it in the field.

Freezing eggs is more difficult and is almost unknown, except for humans and a few domestic animals. We have not yet frozen coral eggs. However, we have to work out how to freeze coral larvae, and use very sophisticated methods, such as lasers, to warm the larvae at millions of degrees per minute.

Additionally, we have used these frozen assets to prove that they can be used for restoration. We have used frozen sperm to make new coral; and we’ve crossed sperm from one geographical region, with eggs from another area that wouldn’t ordinarily meet, to show that it can be done. This proof of concept is called assisted gene flow, because it can allow us to move genes from corals that are thriving and partner them with coral that are not doing as well.

One of the biggest threats to coral reefs is climate change. Our overuse of fossil fuels is warming the planet. It also causes the ocean to warm and to become more acidic, which is problematic for corals. When the oceans become too acidic, it will ultimately prevent the coral from absorbing the calcium carbonate that they need to grow.

When the ocean temperature is too high, coral bleaches, and loses its life-giving algal symbionts, which is a bit like a person having a heart attack. If this happens on an annual basis, then corals may ultimately die off.

It’s not going to be easy to restore our oceans, unless we seriously make some changes now. There are both local and global causes which are leading to the death of reefs and one of the biggest things that we can do is to start really addressing those local causes. In Kaneohe Bay that means dealing with sediment and pollution in the Bay.

As an individual, the global issue of climate change seems somewhat intractable: it’s difficult to feel like you can have any impact to help our future. I think that’s what we’re doing with our conservation efforts. I cannot reduce global CO2, but our conservation and reproductive efforts can potentially help to provide seeds for the future for the ocean.

Our job is really not about today, it’s about 200 or 500 years from now when, hopefully, our oceans have been restored to pre-industrial conditions. I’ll never see the fruition of that work in my life, nor my students or their students, but we’ve set this whole thing in motion. As a scientist, I know we’re doing something that really is good for the planet.

Coral reefs are the most beautiful ecosystem on our planet and it’s critical that we do this work now.”

Life Below Water and the UN


Source: https://human-wrongs-watch.net/2020/06/06/first-person-collecting-the-book-of-life-for-coral-reefs/
Before It’s News® is a community of individuals who report on what’s going on around them, from all around the world.