A new report released Tuesday draws attention to the worldwide decline in insects and calls for global policies to boost the conservation of both agriculture and the six-footed creatures.

While there’s no definitive count of the global loss of insects, Insect Atlas says the trend is unmistakable. 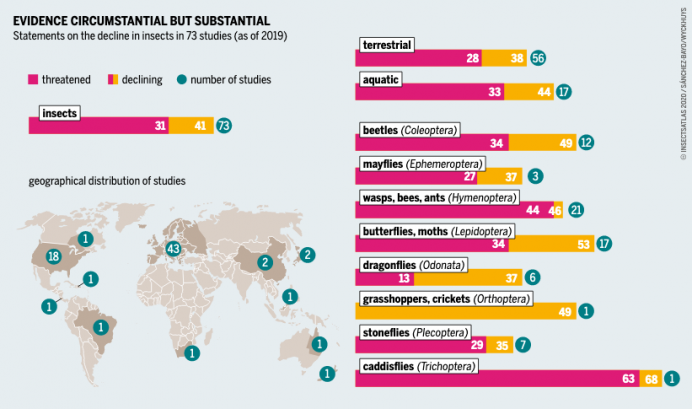 That decline has major impacts on food.

“Three-quarters of the world’s most important crops exhibit a yield benefit from pollinators: they contribute directly to around one-third of global food production,” says the report.

The methods used for that production have a huge impact on insects.

“Alongside climate change and light pollution, the spread and intensification of farming is by far the most important cause of the global decline in insect numbers,” the report adds.

This type of farming is dependent upon expanding pasture—often at the expense of destroying Indigenous land and wild animal habitat—and prioritizes monocultures and therefore insect-killing pesticides, the use of which has steadily increased for the past nine decades, the economic profits of which are predominantly flowing towards just four entities:  BASF, Bayer, Syngenta, and Corteva. From the publication:

What is more, the number of chemical products in use around the world continues to increase. And, their negative effects on the insect world are also becoming more and more evident. This is not just because a growing number of chemicals are being applied; the formulations are also increasingly effective and can be used more selectively

Even when some nations ban certain pesticides over concerns, the chemicals’ adverse impacts don’t disappear; they just change locations.

The developed world is waking up to the risks associated with the use of pesticides. The situation is different in the developing world: chemicals that are banned in Europe and North America are still used routinely to control pests. Stricter controls are needed, along with better information for farmers. 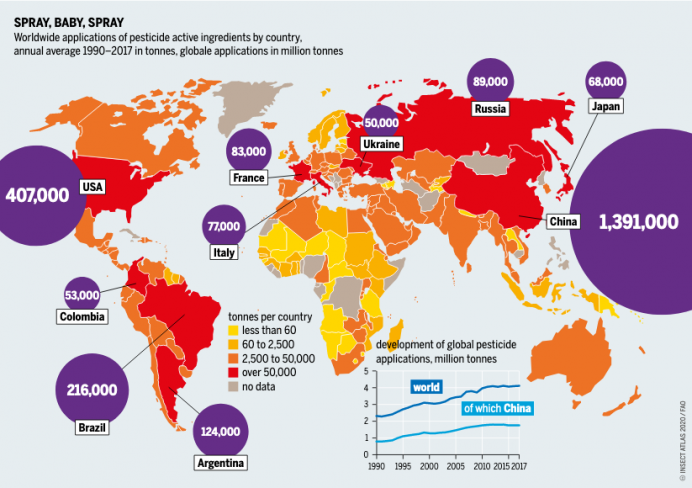 Dismantling industrial agriculture, says the report, is essential. “There is no alternative: to protect insects, farming must become part of the solution. Not just for the sake of society, but  also for the sake of farming itself—because it, too, needs insects.”

“The evidence is clear: pesticide use is wiping out insect populations and ecosystems around the world, and threatening food production,” Mute Schimpf, food and farming campaigner at Friends of the Earth Europe, said in a statement.

“A handful of corporations control the bulk of pesticide supply, and if left unchecked will continue to use their immense political influence to lock in a system of industrial farming which will continue to wipe out nature and destroy rural communities,” she continued.

One area of reform that would address deforestation and the resulting insect habitat losses is curbing meat consumption and therefore the huge swathes of land on which genetically modified animal feed is grown. “If the developed world were to consume less meat and if agricultural products were no longer used as fuel,” says the report, “the pressure on the land areas could be reduced considerably. ”

Insect Atlas lays out a number of solutions for global policymakers to pursue. They include:

Schimpf spoke about those solutions and the report on Euronews Tuesday:

What are the consequences for our food supply?

“If we continue using pesticides so heavily, farmers will lose these pollinators” (2/3) pic.twitter.com/CSQ2WoA8qD

Schimpf also drew renewed attention to the Save Bees and Farmers European Citizens Initiative. It’s centered on three key demands: a phase-out of the use of synthetic pesticides; measures to increase biodiversity; and support for farmers.

Andrea Germanos is a staff writer for Common Dreams, where this article (Save the Insects, Save the Farmers, Save Ourselves: New Global Report Calls for End of Industrial Agriculture) was originally published.


Source: https://www.wakingtimes.com/2020/06/11/save-the-insects-save-the-farmers-save-ourselves-new-global-report-calls-for-end-of-industrial-agriculture/
Before It’s News® is a community of individuals who report on what’s going on around them, from all around the world.