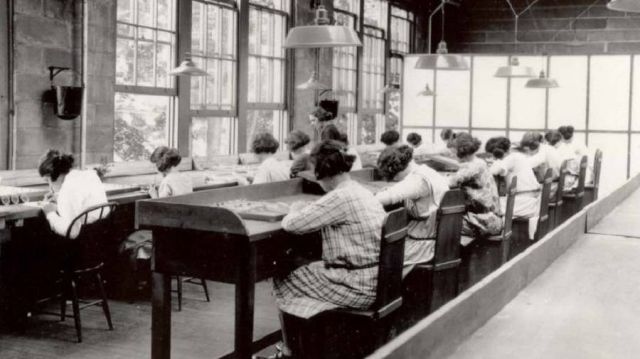 Technology can mean the advancement of mankind. Other times it can also have tragic results, the tale of the Radium Girls is one of those stories.

While the men wore lead aprons to protect themselves from the radiation, the women were given nothing. The Radium Girls were even told to lick their brushes to get a fine point for detail work. 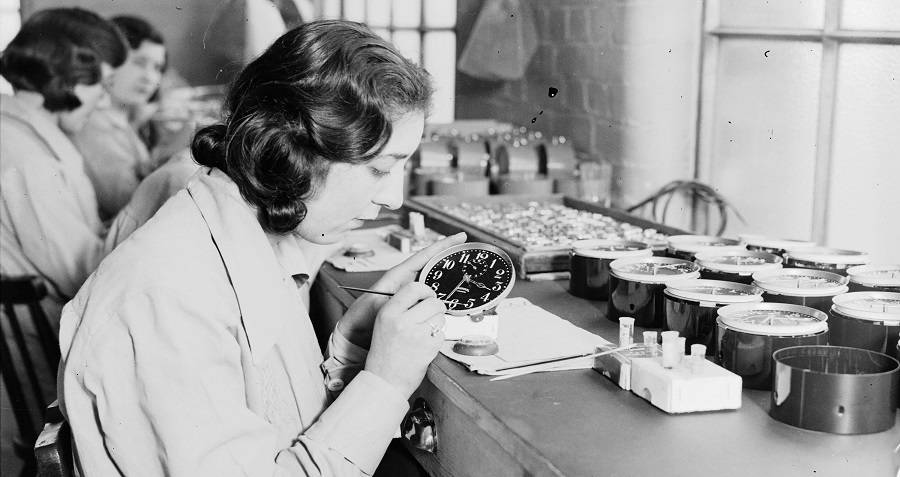 In 1917, scores of patriotic young girls counted themselves lucky to have landed war work at a large warehouse complex in Orange, New Jersey.

The pay was fantastic – roughly three times the average working girls’ wage – and the work was light. Literally, the work was light as the main job the young ladies were given was to apply glowing paint to the faces of clocks, instrument gauges, and wristwatches for the United States Radium Company.

Once a thin layer of white paint, impregnated with the newly discovered element radium, was layered onto the dials, their hands naturally glowed and made them easier to read at night or in a dark trench in Flanders.

Without exception, the “radium girls” were told the paint was safe to handle, and so virtually no precautions were taken while they handled and even ingested countless doses of radioactive poison. 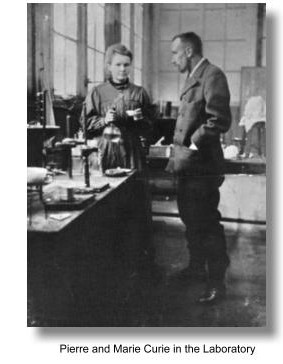 The radium-infused paint was a new invention in 1917. Though Pierre and Marie Curie had first identified the element in 1898, it wasn’t until 1910 that Marie successfully isolated a sample of it to work with.

Right away, the couple knew their discovery was dangerous. Marie gave herself several unpleasant burns improperly handling radium. Pierre once said he couldn’t bear the thought of sharing a room with even a kilogram of the stuff because he was afraid it would blind him and burn off his skin.

The Curies were working with large quantities of pure radium. The conventional wisdom at the time, however, was that a little bit of the stuff was good for human health. Throughout the early 20th century, hundreds of thousands of people drank radium-infused tonic water, brushed their teeth with radium toothpaste, and wore radium cosmetics that gave their skin a bright, cheery glow.

Mixed with the right kind of paint, radium would luminesce after exposure to light, so that a watch face painted with the stuff could soak up energy during the day and stay visible all night long. It was one of the scientific miracles of a very optimistic age.

The Dangers Of Radium 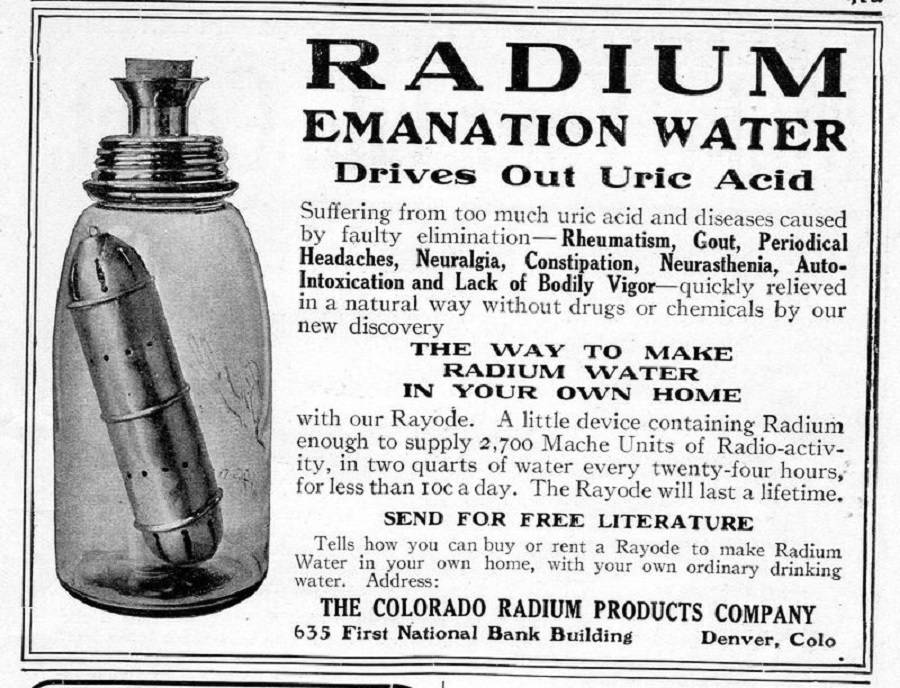 Unfortunately, that bright element had a dark side. The only stable isotope of radium is radium-226, which has a half-life of 1,600 years. For as long as it lasts, any sample of radium will emit alpha particles in all directions.

Normally, alpha radiation is harmless in small doses. Countless natural sources of this radiation can be found in the average kitchen or bathroom. Even nature is full of it as the low-energy particles have a hard time penetrating even one layer of skin. Outside the body, it’s virtually safe.

Inside the body, it wreaks godawful havoc on the body’s tissues. That warming glow radium puts out is caused by the element’s atoms acting like tiny batteries.

Light photons strike the radium atom, bumping its electrons into a higher orbit. After the sun sets and it gets dark, those electrons spontaneously drop into lower orbits, emitting a particle and some photons as they go.

When radium is placed next to human cells or in the bloodstream, like when it crosses a mucous membrane such as the gums, it turns into a microscopic machine gun that gets lodged in the body’s tissues. The radium then fires off particle after particle at a very close range, eventually mutating and killing the cells around it.

The Work Of The Radium Girls 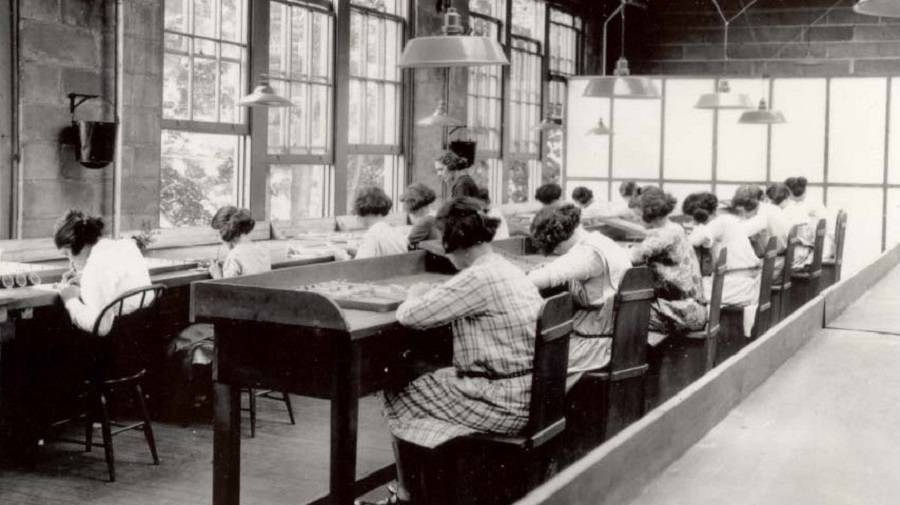 The men who worked for USRC wore lead aprons to protect them from this radiation, which was known to have a cumulative effect. The shop girls were given no protection of any kind and even encouraged to lick their brushes to get a fine point for detail work.

The reason the company gave for this difference was that the male engineers were handling huge bundles of raw material, while the girls were never exposed to more than a small amount at once. Day after day during the war, and for many years after, the radium girls painted military and civilian watches and dials, licking their paintbrushes and handling jars of radium tincture as carelessly as they would handle any paint.

This paint naturally got all over the girls, whose clothes and skin would glow when they got home from work. The girls thought this was great fun; reassured by their supervisors that they were perfectly safe.

Some girls even took to wearing their best ball gowns to work on Friday so they would glow at the dance that weekend. Girls painted their nails with radium, sprinkled flakes into their hair, and even applied it to their teeth to “give their kiss a pop.”

For several years, working at the radium plant was fun and very well-paid, so many of the employees encouraged their sisters, nieces, and sisters-in-law to apply. By 1920, several large families were working on USRC’s floor, totaling around 300 girls at the peak of operations. 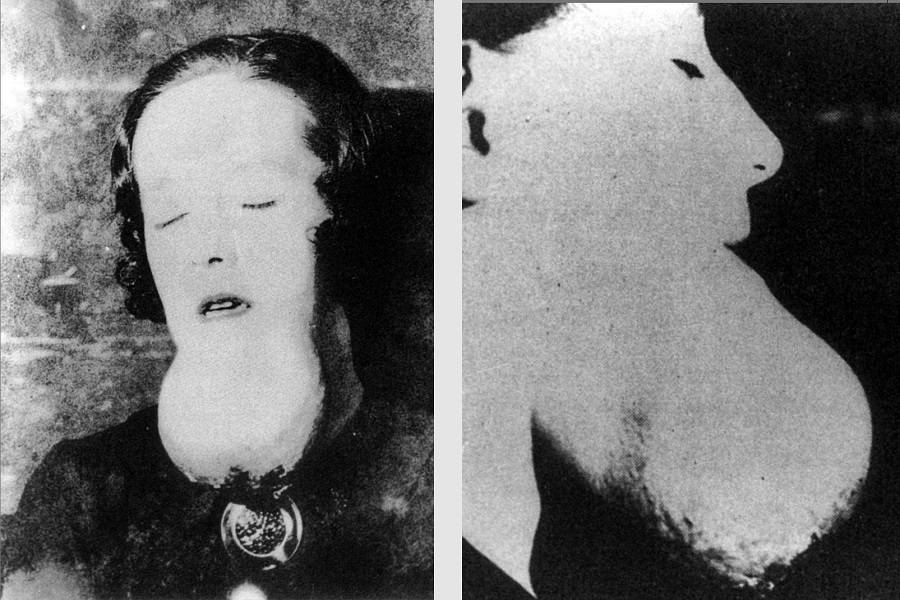 (Real Clear LifeSo-called “radium jaw,” a condition in which abscesses grow completely unchecked across the lower face. By this point in exposure, the victim is almost certainly dying.)

In January of 1922, radium girl Mollie Maggia got a toothache. She went to the dentist, who told her the molar needed to come out. A few weeks later, she was back to have the tooth next to that one pulled. Neither wound healed, but they grew together and seeped blood and pus into Mollie’s mouth. More teeth had to come out after that.

By May, her dentist thought Mollie needed surgery to remove a fast-growing abscess he’d found on her jaw. When he got the gums open, the bone didn’t look right as it was too ashy and gray, so he gently prodded it with his finger. To his shock and horror, the whole bone crumbled under his fingertip like ashes in a fireplace.

Instead of removing a tumor, he wound up digging Mollie’s entire left jaw out with nothing but his fingers. Unbeknownst to him, the radium had perforated the bone cells and stripped them of calcium. It had, like a little machine gun, shredded the collagen inside the bone and left it as little more than a pile of splinters.

That summer, the rest of Mollie’s jaw came out, followed by bits of her inner ear. By September of 1922, eight months after her first toothache, Mollie Maggia was dead. The tumors had cut into her jugular vein and flooded her throat with blood, choking her to death in bed.

Mollie wasn’t the only girl this happened to. Radium passes easily through the gums and into the blood, so around the time Maggie got sick, all sorts of odd symptoms were cropping up among the shop girls.

One suffered a total collapse of her vertebrae, as the radiation did to her spine what it had done to Maggie’s jaw. Others developed skin cancer, cataracts, throat cancer, and other symptoms of long-term radiation exposure, such as loose teeth and hair loss.

At the time, though radium was known to be acutely dangerous, nobody had any experience with radiation sickness. Mollie’s death had been attributed to syphilis, which the company gleefully cited after the accusations and lawsuits started rolling in.

The Radium Girls Fight Back 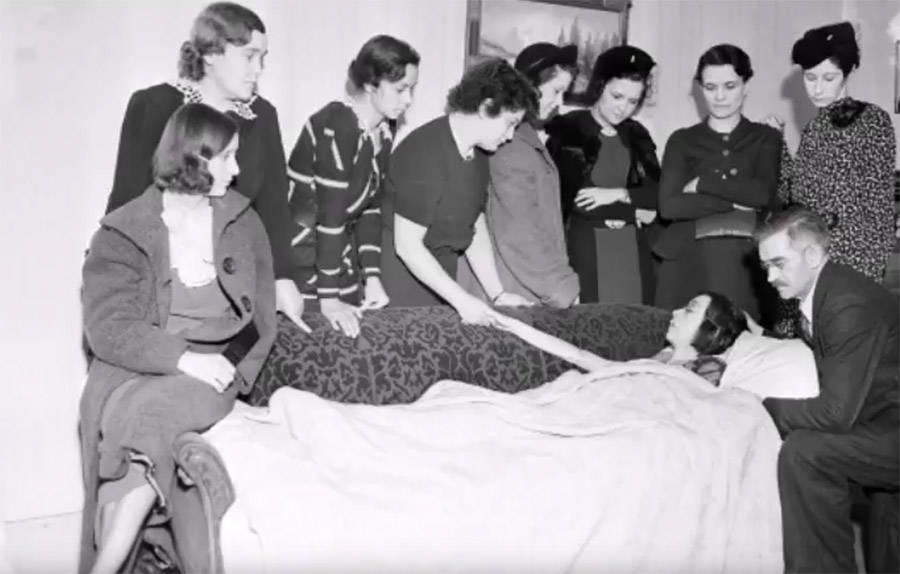 (YouTubeNine of the 14 plaintiffs seeking compensation from Radium Dial Company for asserted permanent injury suffered as a result of poisoning contracted through work painting radium on watches dials. Feb. 11, 1938.)

And roll in the accusations did. Way back before the USRC had started operations, the firm’s president had commissioned safety studies on the glowing muck and had come away satisfied it was safe.

By 1924, when dozens of radium girls were sick or dead, an independent study – one that USRC didn’t pay for – established that radioactive paint is indeed hazardous when ingested. Outraged at the implications and financial ramifications of this study, USRC did something modern readers are familiar with from dealing with tobacco and big oil companies: they paid for another study that found what they wanted to find, that swallowing radioactive paint is good for you.

None of this would fly after 1925 when Harrison Martland studied the issue for himself. Martland would later become the man who coined the term “punch drunk,” to describe the damage boxers’ heads suffered in fights.

First, Martland reopened the case of Mollie Maggia. At that time, the cause of death was established by a coroner’s jury, which was made up of laymen and acted as the jury in a court case. It goes without saying this is as dysfunctional in pathology as it is in criminal justice, so Martland, as Medical Officer of Essex County, abolished the jury system and hired competent medical examiners.

As expected, Mollie’s corpse showed no sign of syphilis, but it had clearly been mangled by radiation. Similar results came through for the other girls who had died, and eventually, the USRC was driven into ruin by the medical and court costs.

Some Good News, Some Bad News 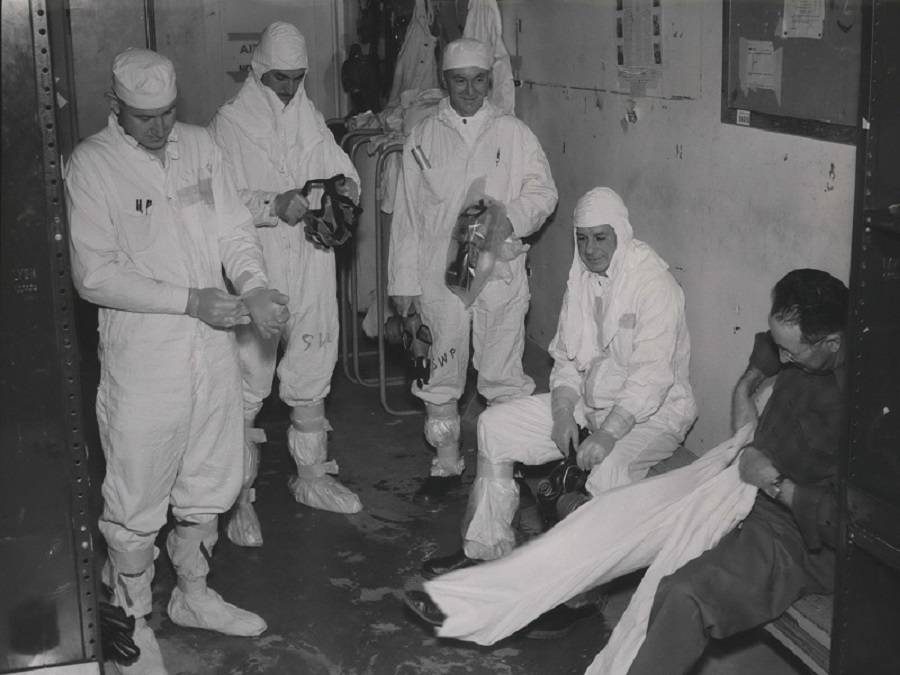 (Wikimedia CommonsWorkers at the Manhattan Project’s Hanford site put on protective gear before exposing themselves to alpha-emitting uranium isotopes. Much of the safety protocol for handling radioactive materials was built on scientists’ experience with radium exposure.)

Vindication came too late for most of the radium girls. Many died young, usually in horrible pain and fear, while others lived many years with weakened bones, lost teeth, and various forms of cancer, which may or may not have been caused by their exposure to radium as teens.

After a typically protracted and ugly court battle, some of the girls were compensated, others weren’t, and life went on. Mabel Williams of Olympia, Washington, may now be the last surviving radium girl. In 2015, she was 104 years old and had worked for USRC at 16.

Their sacrifice wasn’t in vain. Dr. Martland’s work had attracted attention, and in the 1930s, several research institutes approached him for advice in safely handling even more dicey elements such as uranium and plutonium.

In 1942, physicists at the University of Chicago successfully established a brief chain reaction. Three years later, the Manhattan Project produced several atomic bombs. For decades afterward, the US Atomic Energy Commission credited the research and experience gained in the USRC shop with helping them devise handling and safety protocols that kept thousands of other young war workers safe during World War II.

Even today, Dr. Martland’s work on the radium girls and the effects of long-term alpha exposure is being cited and it’s not too far out to say that tens of thousands of people around the world have benefited from what was learned from the radium girls. 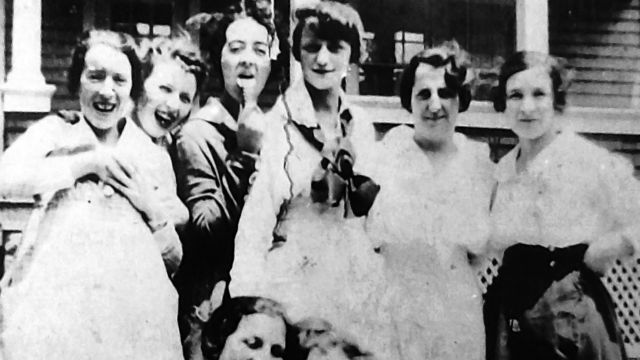