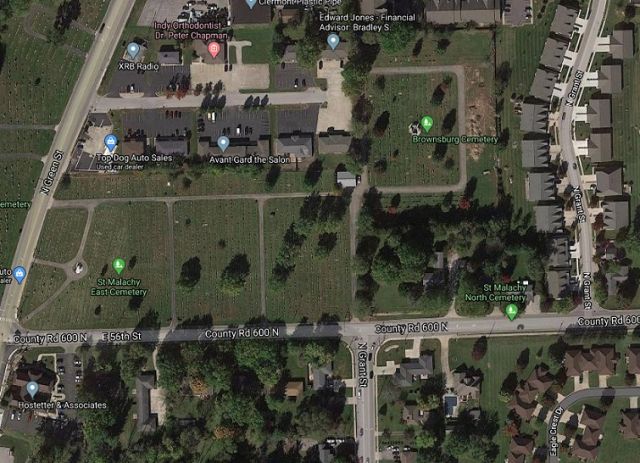 At about 1:15 p.m. on 14 July, at the Brownsburg Cemetary in Brownsburg, Indiana, two men were working  A 20 year old black man, attacked them, in something out of a horror movie.  Joshua Christopher Hays drove to the cemetery, parked, approached the two men, and started shooting.

The two victims separated and ran. Hayes pursued 36-year-old Seth Robertson, catching him at 56th and Grant streets, and executing him with several shots to the chest.

Hayes then chased after the second man and shot a third man who was stopped at a traffic light nearby. The third man was legally armed and fatally shot Hayes.

“This tragic event could have been much more disastrous. So, victim three not only saved victim two’s life, but he saved potentially the lives of many others,” said BPD Capt. Jennifer Barrett. “Victim three did exactly what anybody would have wanted him to do at that scene that day.”

The life-saving gunfire was dramatic. Hays had the second victim down and was pointing his gun at the victim’s head when Hays was struck by the bullet from the third victim, the armed Samaritan, who had witnessed the struggle between Hays and the second victim.

Hays is reported to have turned his attention to the third victim, who fired additional shots to stop the attack.  From yournews.com:

The unidentified licensed shooter’s lawyer Guy Relford explained, “The scenario was fairly clear to him in that the one person was chasing the other and the other was saying, ‘no, no, no, no please don’t shoot me, please don’t shoot me.’ And my client, under incredibly stressful circumstances, took aim, took his shot [and] hit the gunman.”

“The gunman stood up and was looking around and still had the gun in his hand, appeared to clearly intend to continue the attack at which point my client fired another two or three shots and the gunman went down,” he continued.

Hays was black and the known victims are/were white. The police say they have no evidence the attack was racially motivated. From wyrz.org:

Currently, police do not believe that the attack was racially motivated. Hayes, who is black, opened fire on the two victims who are white.

Brownsburg Police Department Captain Jennifer Pyatt-Barrett said, “At this point in time in the investigation, we have no reason to believe this was a racially-motivated crime. We’re leaning more towards evidence suggesting there was mental illness on behalf of Mr. Hayes.”

“So there’s no question he saved at least one innocent life and perhaps multiple,” Relford said. “Because police said he had a drum-style magazine in his handgun that still had a couple of dozen rounds in it.
“So who knows how much mayhem could have resulted if my client hadn’t been the brave hero and good Samaritan that he was.”

It does not appear to have gathered national attention. Why isn’t it as much news as when a police officer shoots a person who was resisting arrest?

That is a rhetorical question. It isn’t national news because it does not fit the anti-Second Amendment narrative of guns being useless for defense of self and others.

©2020 by Dean Weingarten: Permission to share is granted when this notice and link are included.