From Conservative Pro-Life Presbyterian Champion to Hero of Gay Activists in the Reagan Administration
By Julio Severo
C. Everett Koop (1916-2013) was a devout Presbyterian, or conservative Reformed (as Calvinists choose to define themselves), physician who campaigned nationally against abortion and euthanasia in the 1970s. In that time, he published his books “The Right to Live, the Right to Die” and “Whatever Happened to the Human Race?,” which he co-authored with Dr. Francis A. Schaeffer.

Before becoming a celebrity, Koop was a very successful and respected pediatric surgeon at Children’s Hospital of Pennsylvania, with almost 300 academic articles to his name. He pioneered surgery on newborns. In the 1950s, he drew national headlines for innovative surgeries by successfully separating three sets of conjoined twins and by reconstructing the chest of a baby born with the heart outside the body. He was known for his support of the rights of disabled children.

He became the first editor of the Journal of Pediatric Surgery when it was founded in 1966.
He was one of the most prominent and respected leaders in the Christian pro-life movement.
So it is no wonder that as soon as Ronald Reagan (1911-2004) became the President of the United States in 1981, he appointed Koop as Surgeon General to bring his strong pro-life convictions to the conservative administration and also to bring the influence of Schaeffer.
The fact that Reagan appointed a famous pro-life evangelical surgeon as the highest medical authority in the United States is a testament to his commitment to conservative evangelicals and their pro-life values. In fact, Reagan himself was the first president to write a pro-life book, “Abortion and the Conscience of the Nation,” published by Thomas Nelson Publishers, a leading Calvinist publishing house.
Dr. C. Everett Koop is widely regarded as the most influential surgeon general in American history and played a crucial role in changing public attitudes about smoking.
He served as surgeon general from 1982 to 1989, under Presidents Ronald Reagan and George H.W. Bush.
Even though Presbyterians or Calvinists are known as tolerant of smoking, as a former pipe smoker Presbyterian Koop carried out a crusade to end smoking in the United States. He said cigarettes were as addictive as heroin and cocaine.
“Smoking kills 300,000 Americans a year,” he said in one talk. “Smokers are 10 times more likely to develop lung cancer than nonsmokers, two times more likely to develop heart disease. Smoking a pack a day takes six years off a person’s life.”
When Koop took office, 33 percent of Americans smoked; when he left, the percentage had dropped to 26. By 1987, 40 states had restricted smoking in public places, 33 had prohibited it on public conveyances and 17 had banned it in offices and other work sites. More than 800 local antismoking ordinances had been passed, and the Reagan administration had restricted smoking in 6,800 federal buildings. Antismoking campaigns by private groups like the American Lung Association and the American Heart Association had accelerated.
In taking on the tobacco lobby, he was also taking on powerful politicians from tobacco-growing states. After he accused the tobacco industry of directing advertising at children and threatening human lives, Gov. Jim Hunt of North Carolina, a Democrat, called for his impeachment.
In 1996, he rapped Republican presidential hopeful Bob Dole for suggesting that tobacco was not invariably addictive, saying Dole’s comments “either exposed his abysmal lack of knowledge of nicotine addiction or his blind support of the tobacco industry.”
Today conservatives understand the need of antismoking laws. President Donald Trump also restricted smoking in 2019.
Even though Koop was right on smoking, the heavy pressure on him, especially coming from powerful pro-abortion groups and journalists, took a heavy toll.
President Ronald Reagan asked Koop to write a report about the impact of abortion on the physical, emotional and psychological health of women.
This was a big chance for Koop to put his famous convictions into action, but he declined the historic opportunity. He sent a letter back to Reagan stating that there was insufficient research to write a report. Pro-abortion activists celebrated his answer as astounding victory. Angered prolife leaders could hardly believe that this was the same man who ten years earlier had compared abortion to Nazi genocide in the movie and book “Whatever Happened to the Human Race?” 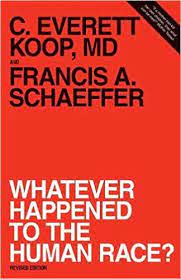 Koop traveled the country in 1979 and 1980 giving speeches that predicted a progression “from liberalized abortion to infanticide to passive euthanasia to active euthanasia, indeed to the very beginnings of the political climate that led to Auschwitz, Dachau and Belsen.”
Koop represented the best hopes of the pro-life movement in the conservative Reagan administration. Because of his high pro-life credentials, probably any conservative president would have appointed this pro-life champion to any government post.
Reagan gave him a golden chance to implement his pro-life principles. But what Reagan discovered is that the powerful pro-life leader he saw with Francis Schaeffer lost his pro-life content when appointed to a high-level office in the U.S. government.
At least, Koop could have applied to the abortion issue the same principles he rightly applied to the smoking issue. But he never did it. He was defeated by the left-wing pressures on him.
As many Presbyterians Koop maintained his personal opposition to abortion as a private matter. After he left office, he told medical students abortion violated their Hippocratic oath.
Koop also shocked the Left and the Right (especially the Right) alike in the 1980s exactly when the AIDS epidemic began by presenting HIV and AIDS not as moral issues, but as a health issue. He shocked the Left because left-wingers did not expect him to support homosexuality, and he shocked the Right because right-wingers expected him to oppose homosexuality.
Gay activists have used the AIDS issue for decades as a tool to get millions in taxpayer dollars to fund their movement and agenda, and their victory was thanks to Koop.
Koop also maneuvered around uncooperative Reagan administration officials in 1988 to send a pro-sodomy AIDS pamphlet to more than 100 million U.S. households, the largest public “health” campaign ever made by mailing. He promoted condoms, “protected” sodomy and sex education to children to “stop” the spread of AIDS. Actually, his campaign increased homosexual activity and activism.
Then, in the midst of a heated national debate about how best to halt the spread of AIDS, Koop blocked the Reagan administration’s plans for extensive testing. To the applause of gay groups, Koop said the disclosure of the test results could ruin the careers of those tested.
Koop’s speeches made him a hero to gay and left-wing groups of America, including journalists. Gay activists chanted “Koop, Koop” at his appearances and booed other officials of the Reagan administration.
Christian conservatives were furious, saying Koop was promoting the gay agenda, while he kept pushing for condoms, “protected” sodomy and sex education for schoolchildren.
Media coverage was generally quite positive, with journalists defending Koop and attacking his Christian critics. He became loved by journalists.
Koop personally opposed homosexuality and believed sex should be saved for marriage. Yet, he never let his conservative principles guide him in the Reagan administration, even though he was appointed exclusively for his strong pro-life stances. He kept his conservative convictions a private matter. The outspoken conservative of the 1970s disappeared in his private life and never appeared in the public life of the Reagan administration.
At least, Koop could have applied to the AIDS and homosexual issues the same principles he rightly applied to the smoking issue. But he never did it. He was defeated by the left-wing pressures on him.
So the greatest victory ever to the homosexual movement, granting it the privilege to use the AIDS issue as a propaganda machine to make gay groups wealthy, did not come from a left-wing leader in a left-wing administration. It came from a devout, conservative pro-life Presbyterian in the conservative Reagan administration. It came from a pro-life leader who had been directly supervised by Francis Schaeffer (1912-1984), the famous Presbyterian theologian.
Koop in a government post is also a lesson for pro-lifers and Christians. There are people fighting for pro-life and Christian values just for opportunism. You cannot see their hearts, but if given a government post, they will have no problem to let their hearts show their real motivation.
The massive pro-life propaganda of Koop, in books and movies, in the 1970s brought him massive fame, especially because he was with Schaeffer. This propaganda was instrumental for Reagan to appoint him. Yet, Koop disappointed Reagan and conservative Christians in the abortion and homosexual issues.
The Koop case was a moral tragedy in the Reagan administration and in the pro-life movement. He could have used his principles — which he used successfully against smoking — against abortion, AIDS and homosexuality, but he never did it.
If smoking is harmful, what is abortion? What is sodomy? What is AIDS? Actually, it made no sense to condemn smoking and exempt abortion and sodomy.
Koop was appointed by Reagan to show his conservative stances, but he chose to hide them, for fear of left-wing journalists and homosexualists.
Because of Koop, the most conservative Republican administration in the modern U.S. history displeased conservatives and pleased left-wingers as far as abortion, AIDS and homosexuality are concerned. It is not what you expect when a conservative administration appoints a conservative pro-life evangelical champion, but it is what you get when the convictions of the conservative champion get heavily tested through too much power in a government post.
With information from The Daily Beast, Associated Press, ABC News, CNN, New York Times, Reuters and Banner of Truth.
Portuguese version of this article: De campeão presbiteriano conservador pró-vida a herói de ativistas gays no governo Reagan
Source: Last Days Watchman
Recommended Reading:
Donald Trump raises the legal smoking age from 18 to 21 for both cigarettes and vapes to protect young people of the evils of smoking
U.S. Embassy in Moscow Defiantly Celebrated LGBT “Pride” Month in Russia
Billy Graham and The Forgotten Factor in the Overthrow of Soviet Communism
Ronald Reagan: A Christian Example against Communism
To follow Julio Severo in Twitter and Facebook: Twitter: http://twitter.com/julioseverous Facebook: http://www.facebook.com/pages/Blog-Julio-Severo/185623904807430