Actually, they have not criticized this effort.

I do not know what is happening to these leaders, because they are very silent. But I know what is happening to one of the major evangelical supporters of Trump: Jerry Falwell Jr.
Falwell has been a prominent supporter of Trump, initially becoming one of the first major evangelical leaders to back Trump in the 2016 Republican primary and continuing to defend him throughout his presidency.
“I was very successful in bringing evangelicals to Trump in 2016,” said Falwell.
After Falwell’s presidential endorsement, Trump said he was “one of the most respected religious leaders in our nation.” 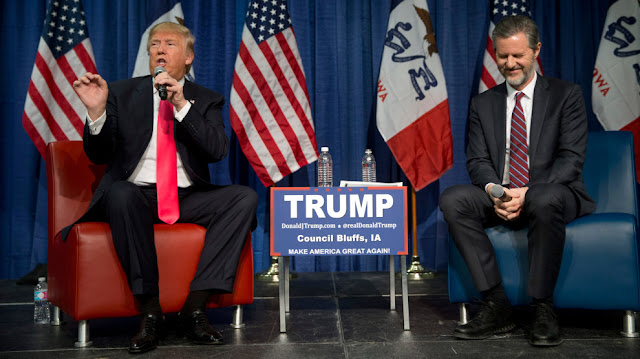 Since Falwell was a prominent supporter of Trump who led multitudes of evangelicals to support Trump, why has he been in silence about moral problems in the Trump administration, especially the global effort to propagandize homosexuality?

The answer is shockingly simple and available on all the media now: Amid a sex scandal, Falwell had to resign from his role as president and chancellor of Liberty University — the noted Christian school his father, a prominent Baptist minister, founded 50 years ago. In fact, Liberty University is the most prominent conservative university in the U.S.
Liberty enforces a rigid moral code for its students. Even though Trump’s personal life, including multiple divorces, is at odds with Liberty’s evangelical morality, Trump gave a speech at Liberty on September 2012. So Trump and Falwell’s relationship happened before the 2016 presidential election.
Based on the moral code of Liberty, Trump should never have been invited to speak at Liberty in 2012. Yet, based in the current sex scandals of Falwell, which have allegedly spanned for several years, there is no inconsistency between Trump’s personal life and Falwell’s personal life.
And there is no inconsistency in Falwell’s silence regarding Trump’s moral scandals. He just cannot speak. I do not know if this is the same problem of other prominent evangelical leaders who support Trump but seem to have no courage to denounce the engagement of his administration in the support of a global gay agenda.
Falwell would be in a better position if he were John the Baptist, who had no life of sex scandals and adulteries and was free to denounce the divorce and adultery of the ruler of his time: King Herod.
John denounced it because rulers should not be exempt to hear what God thinks about disobedience to his Law. Ruler, kings and presidents are not exempt from God’s Law.
So if Trump is not also exempt from God’s Law, why are evangelicals silent about his moral and sexual wrongs? Falwell could not and cannot address this issue because he is no John Baptist. His life is not free from sex scandals. But are all the evangelical leaders in America also hindered from addressing this issue because they are also involved in sex scandals?
It is not wrong for them to support Trump, who is better than his Democratic contenders, who are socialist and immoral. But these leaders should never forget to copy the good example of John the Baptist.
If John the Baptist could in the past, when kings had the power to kill citizens, rebuke the divorce and adultery of a king, why cannot evangelical leaders today make the same rebuke to presidents who have no power to kill them? If they have no courage today, how would they have courage to rebuke Herod in the past?
Cowardice and silence were never a characteristic of John the Baptist, and should never be a characteristic of modern evangelical leaders, unless they are involved in the same problems as Jerry Falwell Jr.
In 2017, Falwell saidabout Trump, “I’m very shocked by how accessible he is to so many. He answers his cellphone any time of the day or night.” If Falwell had no sex scandal, he would be free to use this easy access to say what Trump needs to hear.
Trump heard multitudes of conservative evangelical leaders supporting him, and this is good. He received an estimated 80 per cent of the evangelical vote. He was heavily supported by televangelists.
Now he needs to hear much more from the modern John the Baptists. Where are they? Is there some John the Baptist around Trump, or all of them are Jerry Falwells?
If John the Baptist were risen today, he would rebuke Falwells too.
With information from the People magazine.
Portuguese version of this article: Como os líderes evangélicos podem criticar o ativismo homossexual no governo Trump se eles estão envolvidos em escândalos sexuais?
Source: Last Days Watchman
Recommended Reading:
Trump Supporters Do Not Know He Is Supporting the Gay Agenda
Trump Is the “Most Pro-Gay President in American History,” According to Republican Richard Grenell
Trump Is the Most Pro-Sodomy Republican President in the U.S. History
Prophets and Adulterous Politicians
U.S. Embassy in Moscow Defiantly Celebrated LGBT “Pride” Month in Russia
U.S. Embassy in Brazil Celebrated LGBTI “Pride” Day
Trump’s White House is open to hear some parts of the Bible, but no biblical condemnation of sex of men with men
Trump Praised Gay “Marriage” on Eve of India Visit
Tony Perkins, of Family Research Council, and Emasculated Christian Activism
Trump Administration Uses Left-Wing Language to Rebuke Zambia For Its Laws Against Homosexuality
Trump Administration Pushing LGBT Agenda on Country of Georgia, But the People Fight Back
Making Sodomy Great Again: Trump becomes first Republican president to celebrate LGBT Pride Month as he launches campaign to make homosexuality legal around the world
Largest U.S. Gay Magazine Furious Over Evangelical Protest Against U.S. Government Effort to Decriminalize Homosexuality Around the World
Who Is Bothered that I Asked More Conservative Energy from the Family Research Council against the Gay Agenda? Right Wing Watch, of the left-wing group People for the American Way!
Family Research Council: Serving Conservatism or Serving the Republican Party?
Trump Supports Gay “Marriage” While His Conservative Christian Supporters Remain Silent
Trump Administration Seeks Legalization of Homosexuality Around the World While Children and Other Victims of Homosexuality Are Forgotten
For Second Year, Trump’s State Department Recognizes June as LGBTI Pride Month
What Will America Gain by Making Sodomy Great?
U.S., European Union, Brazil, Argentina, Chile and Israel Pressure Romania to Embrace Homosexual Activism
Trump Delivers Historic Pro-Life Speech But Goofs As He Congratulates Homosexual Republicans
Trump’s State Department Recognizes June 2017 as LGBTI Pride Month
Ivanka Trump posts message of support for LGBTQ Pride Month
U.S. Embassies Under Trump Advance LGBT Agenda
Trump Continues Obama’s Homosexual Imperialism and Frustrates Christian Conservatives
Trump and Obama: What Has Changed Between Them on Homosexuality and Saudi Arabia?
Trump Administration Shows Progressive Response to the Gay Agenda
The Left-Winger, the Right-Winger and the Cake
Trump and Prophecies, and a New Model of National and World Leader
An Open Letter to President Donald Trump
To follow Julio Severo in Twitter and Facebook: Twitter: http://twitter.com/julioseverous Facebook: http://www.facebook.com/pages/Blog-Julio-Severo/185623904807430