U.S. And The Common Man: RIP

Once he was lauded as the salt of the earth.

He was the U.S.’s embodiment of what made us Americans special,
attested to what made the great democratic experiment successful
and the most potent symbol of what made of the United States the
magnetic pole for the world’s masses.

While politicians paid their rhetorical respects, Aaron Copeland
composed a “Fanfare to the Common Man” suite.

It was an honorable term, an affective shorthand for the Working
Man, the Artisan and the Shopkeeper, the Clerk.

To add insult to the injury, they are politically marginalized by
a party system that serves up a restricted menu of options which
effectively disenfranchises 25% or so of voters.

The Common Man has lost the attention of the country’s elites.

Today, to call a person common is an insult, just as we have
degraded the term working class.

The connotations are heavily pejorative – they are deemed failures
and losers.

They may have had the American Dream within reach,
but lacked the will and the spirit to grab it.

It’s their own fault, following a process of natural selection.

This Victorian ethic grounded in Social Darwinism has now been
restored as part of the national creed.

Fitted out in the post-modern fancy dress of market fundamentalist
economics, this beggar-thy-neighbor ideology dominates our public
discourse.

All this is no accident.

Powerful interests have orchestrated a relentless campaign for
more than forty years to reconfigure American life in accord with
their reactionary aims and principles.

The distressing truth of our times is that the Common Man has
been abandoned by those elites – in politics, in government,
in journalism, in professional associations, in academia.

Those elites care little, are preoccupied with their own careers
and pastimes, possess only a feeble sense of social obligation,
and are smugly complacent.

Money is the common denominator in all of this.

Simple, avarice and moral courage are not compatible human
traits.

The plutocratic structures that control our public affairs offer
no relief to the vanishing common man.

This is due to a crude political-economic calculus.

At the heart of American carelessness is pervasive status anxiety.

In a supposedly “grand” nation that is equipped only with a scant
safety net, all layers of society struggle with status deprivation or
status insecurity.

It always has been a hallmark of the United States that inherited
class position has never been wholly secure and easily uprooted
by the winds of a constant social shuffling.

That is a key reason why Americans have always been so consumed
by an endless, open ended status competition.

That generates anxiety since there is never enough positive status
to go around.

Moreover, status is a finite commodity, as most are destined to find
out to their surprise and frustration. The constant deepening of our
narcissistic culture has not helped. It has only uprooted us even
more.

We are now a society where growing numbers recognize no external
communal standard to measure and appraise their conduct – or
worth.

With all that heartlessness, America’s collective superego
has shriveled.

The new categorical imperative is to think of oneself alone
whenever and wherever possible.

To give priority to any other claim is taken as unnatural.

The Godfather’s self-serving plaint that “I did it for my family” is
widely adopted as the elite’s all-purpose excuse American credo.

The idea to “let humanity be the ultimate measure of all that we
do,” once viewed as enlightened social humanism during the second
half of the twentieth century, is viewed as some self-destructive
form of European socialism.

The days when an idea like this balanced and oriented us Americans
is long gone.

This leads to temptations that further erode the U.S. social and
political fabric.

Why not trade in my senior government post, the rationale goes,
for a lavish corporate life style?

In a country where notions of the collective good and of the public
trust are now almost considered subversive, total emphasis on the
individual enterprise is totally ok.

Isn’t that what makes our country great?

Egregious examples abound: Why not be accomplice to torture
when doing so opens a spot at the Pentagon trough for the
American Psychological Association?

Why should a law school Dean or senior faculty stick his neck out
when the Koch Bros are offering lush funding to establish Law &
Economics programs that just happen to promote market
fundamentalist principles?

To their own mind, these are also the persons who will stand up
front before history – never mind that they knew better, should
have known better, were expected to know better.

If I have good reason to sublimate all this, such a person
rationalizes, why do I have a duty to the Common Man –
the ordinary citizen?

My status, my rank, do not depend on it.

My financial well-being does not dictate it.

Amidst all these ever crasser displays of raw self-interest, we know
one thing for certain: When the “common man” dies, the America
that the world marveled at for 250 years dies with him. 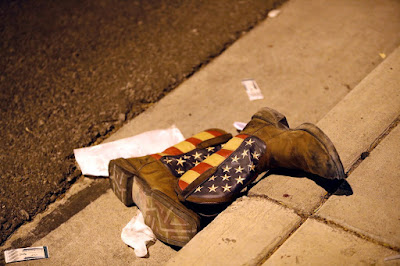 Loading...
"Not by might, nor by power, but by my spirit, saith the Lord of hosts." Zechariah 4:6
BEFORE IT'S NEWS ON TELEGRAM
GET THE TELEGRAM APP - https://telegram.org/ JOIN OUR CHANNEL - https://t.me/BeforeitsNews
Read it..
BEFORE IT'S NEWS
SIGN UP FOR OUR NEWSLETTER
Today's Top Stories
Tsunami Coming! Biden Shocking New Revelations Only The Beginning
Lawsuit Accuses Facebook of Watching Instagram Users Through Phone Cameras
Sarah Westall: Military Coup! What is Planned & Names Behind the Plan - w/ Colonel Black & Harley Schlanger
SGTreport: Passion of the Christ's Actor Jim Caviezel Delivers NWO and Satan A Knock Out Blow
500K Taken into Re-Education Labor Camps & Mike Pence Issues Dire Warning to America!
Only 2% of All People Can Hear This Mysterious Sound – and Nobody Knows Why (Video)
Crimes Against Humanity Exposed! Truth Will Be Told! - A Must Video!
Donald’s Greatest Show On Earth! Betrayal and Deception. The Nightmare Is Soon To Be Unleashed. Where Is This Coming Messiah Mentioned In Bible Prophecy? Awesome Videos
Crime Family? Exposing the Criminal Families & Their Puppet Masters - Must Video
Edgar Cayce: Strange Metals, Minerals and Stones... Their Magical Properties Were Noted by Cayce
Loading...
Featured
X22Report: The Hunt Is on, [CF] Comes into Focus, Crimes Against Humanity! - Must Video
Blue Coup! Are They Willing to Destroy Our Republic to Cover-up Their Crimes? - Must Video
X22Report: V Recovery Continues, Economic Foundation Being Built, Watch the Market & Gold! - Great Video
President Trump Holds "Great American Comeback" Rally in Jacksonville, FL - Live Feed Now Video!
Glenn Beck: The MSM Is Lying to You About the Breonna Taylor Story! - Must Video
Deborah Tavares: Our Survival Will Depend on What We Do Today
Steve Quayle Unplugged! War Looms, Fearful Will Run, We Will Fight Via The Hagmann Report
The Year 2020 Has Democrats Melting Down Like Never Before! - Great Video
RichiefromBoston: We Are Under Attack, Act Accordingly!
Taxpayer Funding it All! New Que Drops! The Destruction of America! - Great Video
Loading...
Top Global
The Seeds Have Been Planted For The Next American Civil War. I Don’t Think Anything Stops It Now.
SGTreport: General Wesley Clark "We're Going to Take-Out 7 Countries in 5 Years"
Wanna bet that Aus’ is a testing ground for what’s coming soon?
WATCH: President Trump Slams China at United Nations: ‘China Must Be Held Accountable’
After Trump Shut Him Up, Vengeful Fauci Made NEW Sinister Plans & He’ll Stop At Nothing To Get It!
RichiefromBoston: A Major Part of Their Plan Was Right In Front Of Our Eyes
Breaking! China Warns What Comes Next In Taiwan!
BioWarfare: Chinese Communists “Intentionally” Unleashed “Frankenstein” COVID-19, Says Wuhan Scientist!
China is Spying on Millions of People & They Aren’t in China!
Massive International Banking Scandal Crushes Bank Stocks, JP Morgan, Deutsche Bank, HSBC Plunge On FinCEN Leak! - Must Video
Loading...
Top Alternative
The Mandela Effect: The Man From the 'Country' That Does Not Exist! Multiverses
Edgar Cayce: Strange Metals, Minerals and Stones... Their Magical Properties Were Noted by Cayce
The Great Conservative Migration & What it Means for the Future
Ghislaine Maxwell's Friends Predict She Will 'Sell Out' Bill Clinton as New Revelations Emerge!! - Must Video
Soros-Funded Coalition Plans to Unleash Election Day Chaos That Could Far Surpass Floyd Protests!
Biden Voters Riot, Commit Arson, Vandalism, And Attempted Murder
American Civil War Looms as Trump Reveals Intention to Ignore Voting Results
Fatally flawed COVID vaccine monkey business.
Only 2% of All People Can Hear This Mysterious Sound – and Nobody Knows Why (Video)
Civil War: The Left’s Revolution Playbook EXPOSED