Sprawling over 20 km (12.5 miles) and 40 billboards, an art exhibit turned the city of Cremona, Italy into a gigantic celebration of MKULTRA. Indeed, this year’s edition of Affiche, an “atypical exhibition” using city billboards to display art, featured paintings by Nicoletta Ceccoli – a famed artist who specializes in disturbing yet blatant images referring to Monarch programming. Of course, this subject matter comes with the obligatory references to child abuse, human trafficking, and satanic rituals.

The global elite loves Ceccoli’s work and is willing to reward her with generous contracts. Are these people bothered by the fact that nearly all of her paintings refer to the most horrific practice known to mankind? No. The symbolism relating to Monarch programming is actually part of their sick “culture”. They love to be surrounded by it and they want us to be surrounded by it as well. 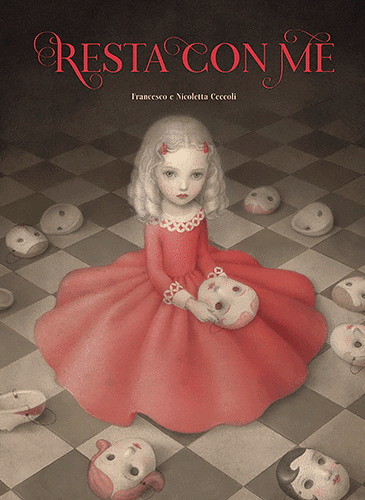 The cover of the illustrated book “Resta Con Me” (Stay With Me) is pure Monarch symbolism. Sitting on a checkerboard pattern floor (the ritualistic surface of occult transformation), a girl dressed in red (the color of sacrifice) is surrounded by masks representing the alter-personas of an MK slave.

Nearly every painting made by this artist is replete with MK symbolism and all kinds of “codes” hinting to sadistic abuse. And, for some reason, Affiche 2020 selected these paintings to be plastered all over the city of Cremona.

On its official website, Affiche 2020 describes itself as follows:

Affiche is an atypical exhibition, set up in the spaces that are normally reserved for advertising or electoral posters. Affiche is an exhibition that expands throughout the city with a journey of about 20 kilometers. Every year the large-format artworks of a great international illustrator are shown and his images – usually published in magazines, newspapers and books – are presented directly to passers-by, whether they are strolling, or traveling by car or bicycle. The exhibition space is the city itself. 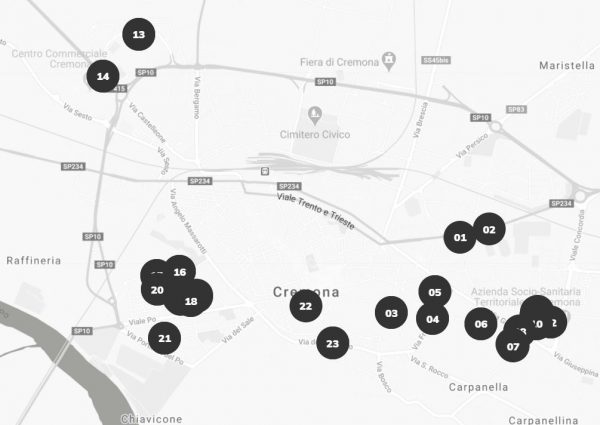 A map of the Ceccoli billboards displayed across Cremona.

Here are some of the paintings put on display by Affiche 2020. 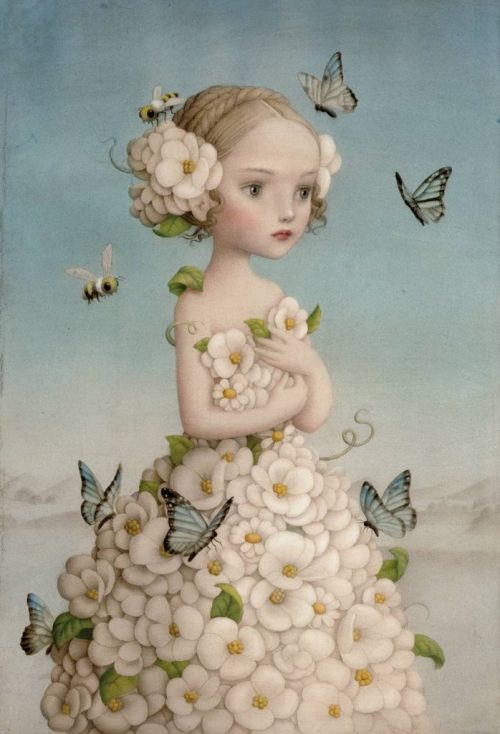 The painting titled Ingenue features a girl surround by monarch butterflies – a reference to Monarch programming. Furthermore, the girl is wearing a dress made of flowers while insects are pollinating them. This is about the “birds and the bees” talk given to children to explain sex. In other words, this painting is about the abuse of an MK slave by Monarch handlers. 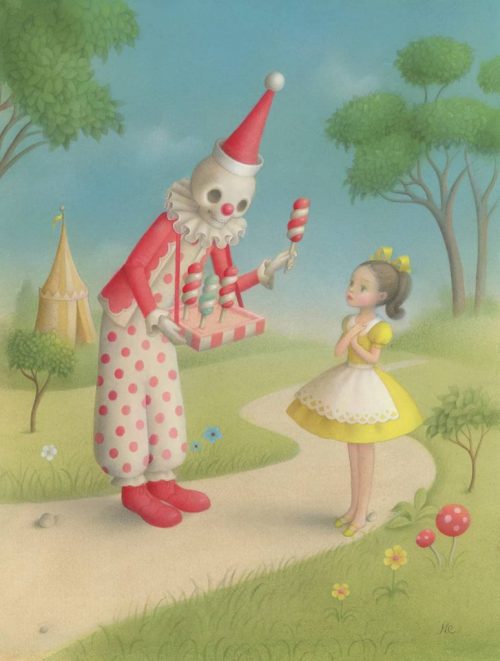 This one is called Wicked Delights. A scary figure offers a phallic-shaped lollipop to a young girl. The red and white mushrooms on the ground indicate that the girl is probably being drugged. Indeed, fly agaric mushrooms (red with white dots) are known for their hallucinogenic properties. 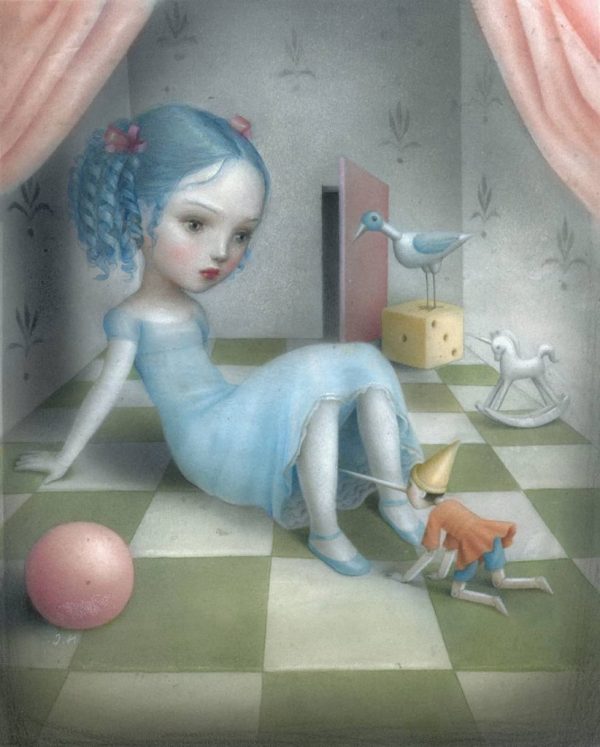 This one is called Compagno Di Giochi which means “Playmate”. It is about an MK handler abusing a young girl on a dualistic floor. How can this clearly pedophilic “art” be celebrated? 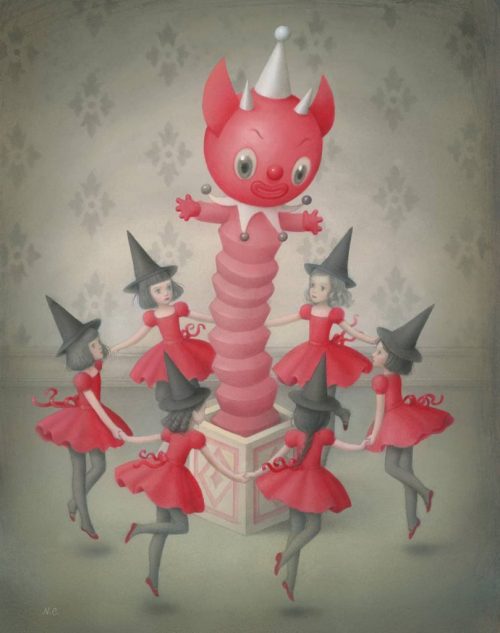 This one is called L’Ora Del Diavolo (“Hour of the Devil”). It refers to the “Witching Hour”, that time at night where the invocation of the demons is the most potent (believed to be 3 AM). This painting is about MK slaves partaking in satanic rituals and invocations to further trauma and control. 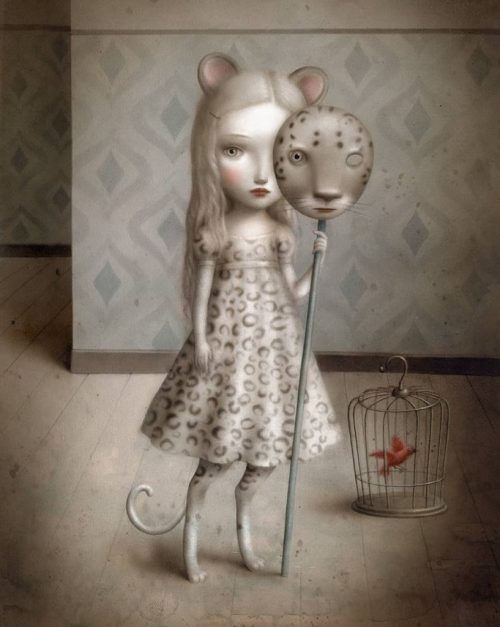 This one is called Hide And Seek and it is 100% about Beta Kitten programming (used to create sex slaves). The girl wears feline prints (used to identify Beta slaves) and holds a feline mask which represents her Beta Kitten alter-persona. Furthermore, the mask is used to create a one-eye sign. To make things 100% obvious, the bird inside the cage indicates that this is all about MK slavery. 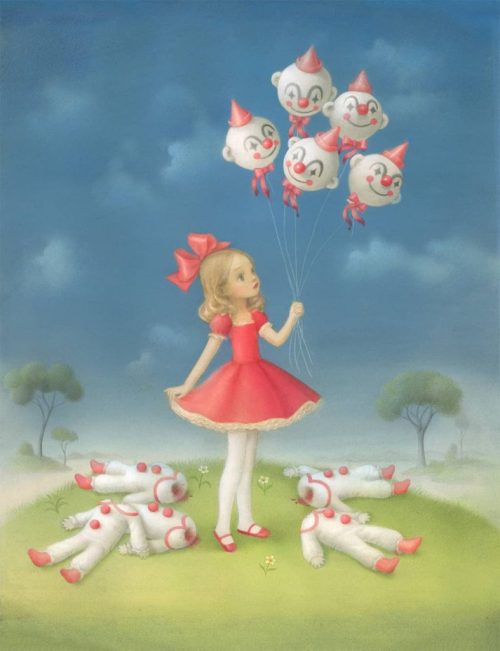 This painting represents the dissociation of MK slaves during abuse (described as a feeling of weightlessness). The painting’s name “You’ll Float Too” ominously alludes to the girl dissociating. 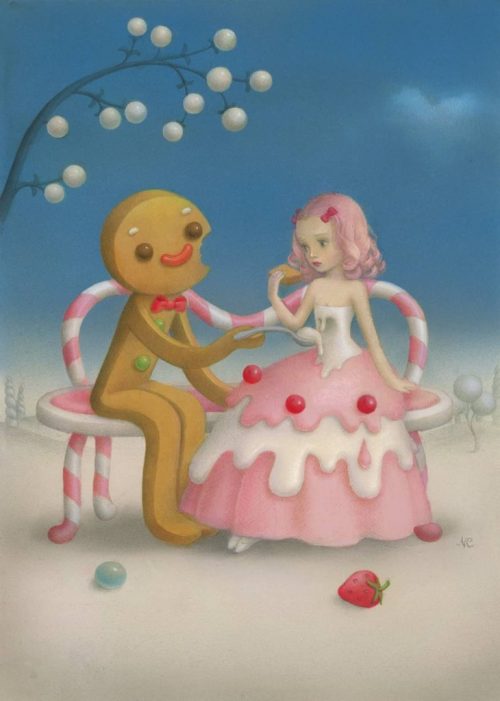 This is another painting representing a handler physically abusing a slave. The title Til the End indicates that she won’t come out of this alive. 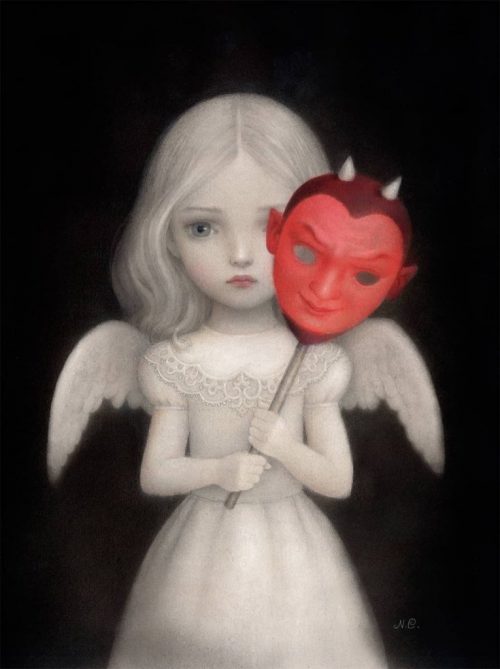 This one is called Good Girls Go Bad. It represents the “corruption” of children after being forced into the satanic system of the elite. The one-eye sign formed by the mask seals the deal.

Other than being a pedophile’s fantasy, this painting represents the training of Beta Kitten slaves on a ritualistic floor. 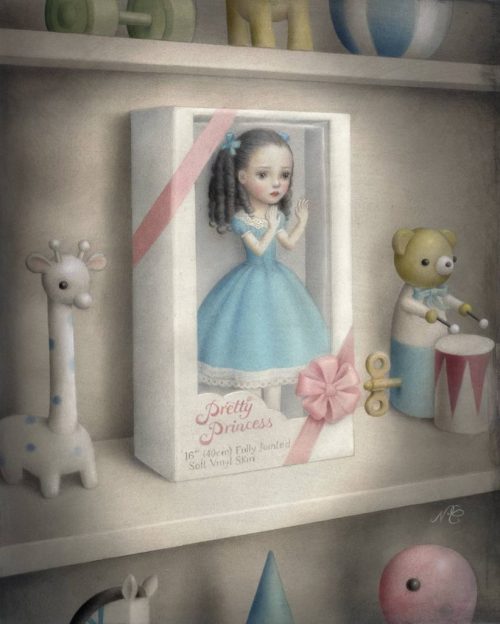 This one represents the final outcome of many MK slaves: Human trafficking. This girl is “boxed” and sold as an object. On the box is written “Fully Jointed Soft Vinyl Skin”. Creepy.

It doesn’t take an expert in symbolism to realize that there’s something terribly wrong with these paintings. And Cremona citizens immediately protested this exhibition. Here’s an excerpt from an Italian news article about the exhibit (free translation).

Cremona, the Affiche exhibition and the disturbing images of a horror childhood 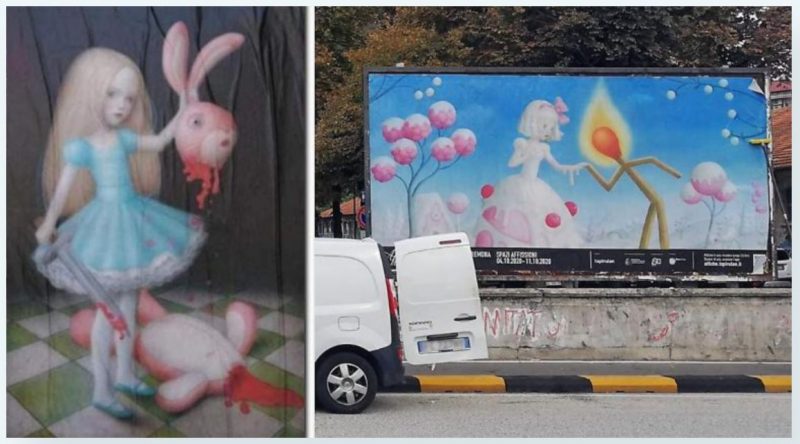 A few days ago, the new edition of ‘Affiche’ was inaugurated, a controversial exhibition of illustrations in giant format, displayed in 43 public billboard spaces in the city of Cremona.

The images created by Nicoletta Ceccoli, an illustrator of children’s books, are about the world of childhood and are depicted in a disturbing way (to say the least): In a giant picture you can see a horror version of Alice in Wonderland cutting the throat of a rabbit, but this is nothing compared to the other illustrations that wink at child p*rn. In one, there is a pinocchio dominated in a “sado-maso” way by a girl who wields a whip, not to mention two other images in which, a train and a bunny enter the genitals of two girls.

The aggravating circumstance is that in fact, these are public billboards and the exhibition, organized by the cultural association “Tapirulant”, extends for 20 km in the city space and was inaugurated with a bike ride because among the sponsors there is also Bicincittà.

There is talk of “dream style” with regard to images, but nothing about these images appear to be vague or imaginative. To the contrary, the message is quite clear, to the point of raising the indignation and protests of various exponents of the center-right. In fact, the group advising the Premier Lega per Salvini has announced that a question will be presented on the matter.

The senator of the League Simone Pillon denounced this initiative which he called “cryptopedophilia” and pointed out in a Facebook post, that the “works” were displayed in front of schools. Furthermore, educational tours were organized with the city’s children.

Addressing the institutional representatives, he poses a simple but significant question to the mayor and the organizers: “Why so much fury against the innocence of children? What is your problem? ” In fact, we too ask ourselves how destabilizing it can be for children who have just passed the difficult test of forced isolation due to the pandemic, to approach with such a gloomy vision of childhood that it ceases to be the place of lightness and kingdom of a fantastic imaginary, to be tinged with the dark colors of violence and perversion.

It is necessary to ring the alarm in the face of what we do not hesitate to define as the first signs of a race towards a moral abyss of which we struggle to see even the bottom.

I could spend all day posting paintings by this artist and explaining their obvious and disturbing meanings. Nearly everything she does is replete with the exact pattern of symbolism that’s been described on this site for years. Furthermore, it is absolutely impossible to make sense of her work without understanding the sick world of MK symbolism and its system of abuse and satanic rituals.

The fact that this artwork merely exists is disturbing enough. The fact that it is actually being celebrated and plastered across billboards is a complete travesty.

The post Disturbing MKULTRA and Child Abuse Paintings Displayed on Billboards in Italy appeared first on The Vigilant Citizen.