29 October 2020 (WMO)* — La Niña has developed and is expected to last into next year, affecting temperatures, precipitation and storm patterns in many parts of the world, according to the World Meteorological Organization (WMO). 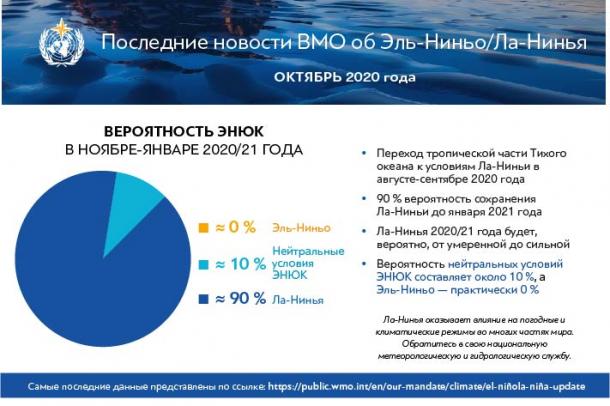 The global declaration of a La Niña event is used by governments to mobilize planning in climate sensitive sectors like agriculture, health, water resources and disaster management.

WMO is now stepping up its support and advice for international humanitarian agencies to try to reduce the impacts among the most vulnerable at a time when coping capacities are stretched by the COVID-19 pandemic.

La Niña refers to the large-scale cooling of the ocean surface temperatures in the central and eastern equatorial Pacific Ocean, coupled with changes in the tropical atmospheric circulation, namely winds, pressure and rainfall. It usually has the opposite impacts on weather and climate as El Niño, which is the warm phase of the so-called El Niño Southern Oscillation (ENSO).

“La Niña typically has a cooling effect on global temperatures, but this is more than offset by the heat trapped in our atmosphere by greenhouse gases. Therefore, 2020 remains on track to be one of the warmest years on record and 2016-2020 is expected to be the warmest five-year period on record,” said Professor Taalas.

“La Niña years now are warmer even than years with strong El Niño events of the past.”

WMO’s new ENSO Update states there is a high likelihood (90%) of tropical Pacific sea surface temperatures remaining at La Niña levels through the end of 2020, and maybe through the first quarter of 2021 (55%). This follows more than a year of neutral ENSO conditions (i.e., neither El Niño nor La Niña). The Update is based on forecasts from WMO Global Producing Centres of Long-Range Forecasts and expert interpretation.

It is important to note that El Niño and La Niña are not the only factors that drive global and regional climate patterns. No two La Niña or El Niño events are the same, and their effects on regional climates can vary depending on the time of year and other factors. Therefore, decision makers should always monitor latest seasonal forecasts for the most up to date information.

For this reason, WMO is now adding to the existing portfolio of seasonal information provided through the National and Regional Climate Outlook Forums and has increased the frequency of the Global Seasonal Climate Update (GSCU) from quarterly to monthly.

In addition to El Niño and La Niña, the GSCU incorporates influences of other climate drivers, such as the North Atlantic Oscillation, the Indian Ocean Dipole, to assess their likely effects on regional surface temperature and precipitation patterns and as such used to underpin much of the seasonal discussions with the United Nations and other partners.

This cell is currently providing impact-based advice to United Nations and humanitarian decision makers.  Seasonal climate information from WMO and other centres of expertise is incorporated into a wider humanitarian assessment to identify those areas considered most at risk. Food security, coping capacity and a number of other factors are combined to create a more holistic assessment of the actual vulnerability.

Work is now underway to expand this support to the humanitarian system by developing a dedicated coordination mechanism to channel the expertise of the WMO community directly to decision makers in order to save lives and livelihoods.

This will make forecasts across different timescales available for disaster management, such as was the case during the recent flooding in Sudan, when WMO provided hydrometeorological information to the United Nations Office of the High Commissioner for Refugees.

This year’s La Niña event coincides with an important rainfall and planting season in much of East Africa, which is forecast to see drier than usual conditions. This, added to the existing impacts from the desert locust invasion, is a further worrying development which may add to the food security challenges in the region.

La Niña can lead to increased rainfall in Southern Africa and this is indicated by some recent seasonal forecast models. However, there are some nuances in these and therefore up to date forecasts should be monitored over the coming months.

La Niña can also affect the South West Indian Ocean Tropical Cyclone season, reducing the intensity.  WMO experts and humanitarian colleagues will convene in November to undertake a thorough analysis of the season ahead.

In Central Asia, La Niña events have been known to lead to a reduction in rainfall from January through to May. However, the latest seasonal forecast highlights an increased likelihood that an area from the Levant through to Central Asia is likely to see below normal rainfall even earlier than usual.

SE Asia and the Pacific

For the Pacific Islands, the effects of La Niña will vary from country to country. Those in the Central and Eastern Pacific may be more susceptible to below normal rainfall, while countries in the South-West Pacific will become more prone to above normal rainfall.

In previous La Niña events, South Asia has experienced a mix of effects, ranging from dryer than usual conditions in the far south, wetter in much of the central regions from June to September and then again dryer in the very far north / north west.

The latest seasonal outlook provides a similar mixed picture, with dry conditions expected over the next few months in the north of the region while the rest of the region is expected to see near normal conditions.

In the far south of the region, the latest GSCU indicates a chance of above normal rainfall, whereas the September issue indicated a possibility of below normal rainfall. The situation will continue to be monitored.

In North America, La Niña typically brings above-average along the northern tier of the continent along with below-average precipitation and across the South. The latest forecast model results are consistent with this historical impact analysis.

In the Caribbean, La Niña events can contribute to an increase in intensity of the hurricane season.  The 2020 season has been one of the most active on record so far.

Links to the Regional Climate Outlook Forums, the Global Seasonal Climate Update and other authoritative sources can be found below.