United Nations praises the Pope for backing same-sex unions: secretary-general of the U.N. welcomes Francis’s remarks that homosexuals “have a right to a family” in move which has enraged conservative Catholics

The secretary-general of the United Nations has praised the Pope’s historic comments in support of same-sex civil unions after Francis said homosexuals are “children of God and have a right to a family.” 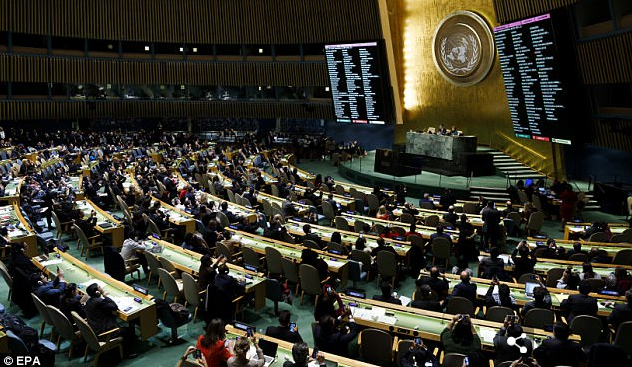 “This is a clear demonstration of a fundamental principle, which is the principle of nondiscrimination,” said Guterres in New York. “And one of the things that has been very clear in the UN doctrine on this is that non-discrimination is also relevant in the questions of sexual orientation. So this is decision of the Pope is, of course, extremely welcome from our perspective.”

It is just natural for Guterres to praise anything homosexual, because he has condemned traditional masculinity.

Socialism is the major factor leading Catholics, including the pope, to anticonservative stances.

Francis’s comments emerged in a new documentary, produced by a gay activist, in which he saidthat “what we have to create is a civil union law,” a position at odds with the official teaching of the Catholic Church.

Doing so, the Vatican reasoned, would not only condone “deviant behavior,” but create an equivalence to marriage, which the Catholic Church holds is an indissoluble union between man and woman.

That document was signed by then Cardinal Joseph Ratzinger, the future Pope Benedict XVI and Francis’ predecessor.

Conservative Catholics think that with Ratzinger as a pope, any acceptance of homosexual acts or homosexual “marriage” would be impossible. But he had to leave its papacy perhaps because of a scandal about to explode: a Catholic school administrated by his brother was involved in a staggering scandalof 547 boys abused, including homosexually.

The scandal has been shrouded in mystery and silence as nothing has been mentioned if Ratzinger’s brother was homosexual or how many homosexual priests raped the boys.

Homosexuality among Catholic priests is the only cause of sexual abuse of boys in the Catholic Church.

French homosexual author Frédéric Martel said that “a very large majority of priests and Vatican cardinals, 80% perhaps, would be homosexuals.” But Steve Bannon said that “it’s not 80%, but rather 90%.”

Bannon intended to launch a film exposing the Vatican’s homosexual scandals, but he was involved in scandals himself.

Even though Bannon is against Francis, his reasons have nothing to do with homosexuality. Martel said about Bannon and his right-wing fight against Pope Francis:

“He thinks like me that the battle is no longer played in Rome between pro-Francis cardinals who would be gay or gay-friendly, and anti-Francis cardinals who would be homophobic and heterosexual. Everyone, on the right, as on the left, would be fairly homophile or homosexual. Steve Bannon has no problem with this observation: he also came to it himself. I suddenly understand the plan of Catholic Bannon. The Church may have to abandon its moral positions on sexuality that are hypocritical, anachronistic and, given the large number of gay cardinals in the Vatican, schizophrenic.”

Francis was wrong to say that “homosexuals are children of God.” To be a child of God, a man must first receive Jesus Christ as Savior and Lord of his life. Only after giving his life to Jesus does he become a child of God. The Bible said,

“To all who did receive him, who believed in his name, he gave the right to become children of God.” (John 1:12 ESV)

So while a man does not accept Jesus’ deliverance and salvation, he is only a creature of God.

With information from the Daily Mail.

Francis became 1st pope to endorse same-sex civil unions, saying: “Homosexuals are children of God and have the right to be in a family”

In his effort to produce a film exposing homosexuality in the Vatican to make Pope Francis renounce, Steve Bannon caused backlash from conservative Catholic leaders and was exposed for his own involvement with two notorious pedophiles

The Hijacking of Homosexuality by the Right, a Challenge for Christians