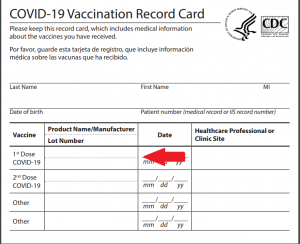 Wondering…might be fun to fill it out and when you don’t wear a mask and someone jumps six feet and shouts at you, you can pull out your vaccine card and tell them that you are immune…can’t give it…can’t get it!

Perhaps you can go into a store without a mask and hand it to the clerk and see what they say.

One of the best things that can happen if we do this is that the truth will come out that the vaccines do not prevent spreading the virus nor do they prevent the virus. Perhaps we can then have a discussion as to what the vaccines actually do other than cause death and disability.