Donald Trump is BANNED from Facebook for 24 hours and Twitter for 12 hours as his tweets are deleted for the first time ever and YouTube removes video where he praised the thousands of patriots who protested against fraud in the U.S. election

Twitter has suspended Donald Trump’s account for 12 hours and for the first time deleted his tweets after he praised the thousands of patriots who protested against fraud in the U.S. election. 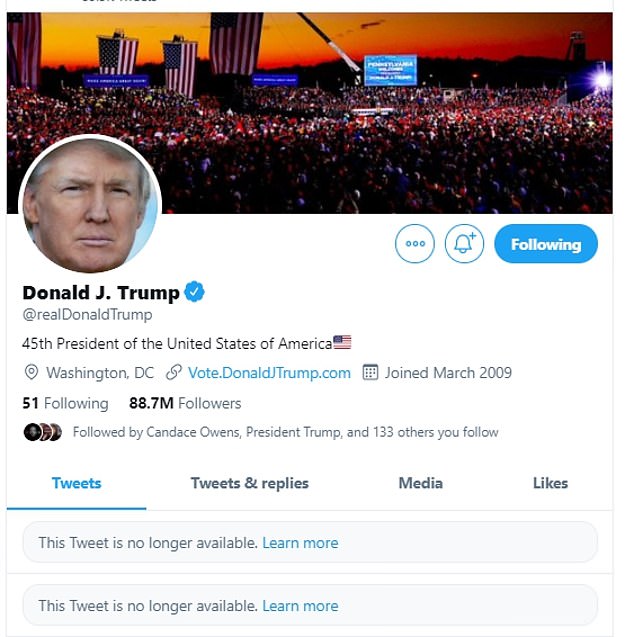 One of the deleted tweets read:

“These are the things and events that happen when a sacred landslide election victory is so unceremoniously & viciously stripped away from great patriots who have been badly & unfairly treated for so long. Go home with love & in peace. Remember this day forever!”

In the deleted video, he complained the election was stolen and telling the marchers that he loved them.

“I know your pain. I know you’re hurt. We had an election that was stolen from us,” he said, adding,

Trump said it was “a very tough period of time,” and emphasized his own personal loss. He said,

“There’s never been a time like this where such a thing happened, where they could take it away from all of us, from me, from you, from our country. This was a fraudulent election, but we can’t play into the hands of these people. We have to have peace. So go home. We love you. You’re very special. You’ve seen what happens. You see the way others are treated that are so bad and so evil. I know how you feel. But go home and go home at peace.”

“The account of @realDonaldTrump will be locked for 12 hours following the removal of these Tweets. If the Tweets are not removed, the account will remain locked.”

To justify its censorship against Trump, a Facebook spokesman said,

“We’ve assessed two policy violations against President Trump’s Page which will result in a 24-hour feature block, meaning he will lose the ability to post on the platform during that time.”

To justify its censorship against Trump, Farshad Shadloo, YouTube spokesperson, said in an email to Insider,

“We removed a video posted this afternoon to Donald Trump’s channel that violated our policies regarding content that alleges widespread fraud or errors changed the outcome of the 2020 U.S.”

Throughout the 2020 presidential election, Twitter placed labels on dozens of Trump’s tweets that denounced voter fraud.

Even though most patriots who marched in Washington DC against voter fraud in January 6, 2020 were pacific, there was a small number of individuals who took advantage of the demonstration to invade the U.S. Congress to do exactly what Antifa and BLM do. Analysts think that they were infiltrators.

Yet, Twitter, Facebook and YouTube have not banned or even blocked BLM and Antifa pages in their platforms. BLM and Antifa, which are Marxist terrorists, spread terror for many months in 2019 and 2020 in the U.S. when their rioters, in rampage after rampage, looted and killed.

Those who invaded the U.S. Congress taking advantage of the patriotic demonstration should be held accountable to the law enforcement just as BLM and Antifa should be.

So if even an anti-Marxist president is not safe from censorship of Twitter, Facebook and YouTube, who is? I can speak from experience: Just before the U.S. election, Facebook permanently banned my official personal account exclusively because of my conservative evangelical stances.

So we should support those who are fighting. Russian President Vladimir Putin is trying to prevail over such powerful virtual tyranny. Recently, he signed a law enabling sanctions on Facebook and other U.S. social media that restrict and censor Russian content.

Twitter, Facebook and YouTube think that they are above law and block and ban anyone they want, especially conservatives and specifically conservative Christians. They are becoming an invisible government tyrannizing people around the world who do not follow the left-wing ideology.

With information from Daily Mail.

Global Virtual Dictatorship “Made in US”

Fraud in The U.S. Presidential Election and the Inaction of the U.S. Armed Forces

Loading...
"Not by might, nor by power, but by my spirit, saith the Lord of hosts." Zechariah 4:6
BEFORE IT'S NEWS ON TELEGRAM
GET THE TELEGRAM APP - https://telegram.org/ JOIN OUR CHANNEL - https://t.me/BeforeitsNews
Read it..
BEFORE IT'S NEWS
SIGN UP FOR OUR NEWSLETTER
Today's Top Stories
US Reopening 100% - State Governors Falling! Navy Seal / Boxing Champ Tell What The Media Won't! - Must Video
Scott McKay With 𝘾𝙧𝙞𝙨𝙩𝙚𝙣 𝙒 March 06, 2021! - Must Video
Clinton Shipped to GITMO, Awaiting Military Tribunal
9/11 EXPOSED (SECOND EDITION) [2015] (DOCUMENTARY VIDEO)
The Whitehats vs. Human Traffickers - The Patriots in Control (Vital Videos)
Red Alert: Your 'Government' Has Abandon You! Prepare For Collapse! - SGT Report Must Video
Breaking! Lt. Gen. Tom McInerney Explains Why Lin Wood's Whistleblower is Absolutely Credibl‪e‬
Why did the military fail to act against the coup against the legitimately elected Trump Administration?
Deborah Tavares: Emergency Alert! March 2021
New Benjamin Fulford on Goldfish Report March 2021
Loading...
Featured
Biden Mumbles For 10 Minutes After Dems Pass $1.9 Trillion Covid Relief Bill without GOP Support – Shuffles Away From Podium and Ignores Reporters (VIDEO)
Are You Ready to Be Called a Domestic Terrorist?
1984: Simply Stunning As People Have Come To Accept This Dystopian Nightmare Of COVID Lockdowns And Isolation As The New Normal
Recall Gavin 2020 Reaches Its Goal Of 1.8 Million Signatures - Goes Over By More Than 100,000
She Died In 2020 Trying To Get This Out To The World - Hear Her Words - Her Death Will Not Be In Vein
Illuminati Planned to Use Vaccines for Genocide
Secret Apocalypse Bunker ‘Buried Beneath Denver Airport as US Government Prepares for End of Days’ (video)
Richard Sauder: The Deep Underground Military Bases (DUMBs) The Greada Treaty [1954] The Classics
Charlie Ward: Meanwhile The Fake News Media Continue To Brainwash The Bewildered Public Around The World! - Must Video
Deborah Tavares: Emergency Alert! March 2021
Top Global
Persian Gulf update 03/07/2021.. Multiple Saudi cities reporting explosions by drones and missiles
Illuminati Planned to Use Vaccines for Genocide
2021! The highest number of major quakes ever recorded in the first 65 days of a year! In all 42 major quakes, mag 6 or higher have rocked the planet: Astonishingly 26 have rocked the eastern margin of the Australia plate since the first day of 2021
U.S. intelligence officials say Chinese government is collecting Americans’ DNA
Venezuela: Islamic Republic of Iran likely key destination for smuggled uranium
The Covid-19 Injection Documentary!! Must See Videos!!
Having another look at Covid measures, loss of freedom and the science behind the treatments being pushed by establishment and authority
New Benjamin Fulford on Goldfish Report March 2021
Prepare
9/11 EXPOSED (SECOND EDITION) [2015] (DOCUMENTARY VIDEO)
Loading...
Top Alternative
Attorney Lin Wood on the Cabal child sex trafficking and pedophilia and fraudulent election, March 7, 2021, SCOTUS In re L. Lin Wood, Jr. response Mon
Dr Vernon Coleman : Vital Revelations About How Masks Damage Children - Parents and Grandparents Must Watch This Video
Persian Gulf update 03/07/2021.. Multiple Saudi cities reporting explosions by drones and missiles
Large 5G Cell Tower Allegedly Disguised As A Tree Is On Fire In Los Angeles – Nearby Apartment Evacuated
The Covid-Vaccine Death & Injury Stats Don’t Add Up! - Rosemary Frei Must Video
Clif High: Woo UFO Ships - Magnetic Propulsion - Mag Drive
U.S. intelligence officials say Chinese government is collecting Americans’ DNA
Welcome to the South – Where Reason Is Still in Place
Shocker!! The Truth About The Moon Landings!! Project Blue Beam "The Fake Alien Invasion” Is Coming Soon In Order To Usher In The AntiChrist And The Stinking New World Odor!! Must See!!
What’s the point/purpose of a UFO explanation?