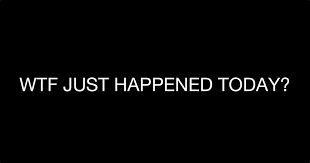 What just happened in America?

Maybe we just witnessed the results of decades worth of removing God from society?

The New World Order just displayed, for the whole world to see, how much power they have over every person in the world.

They control everything and everyone in a position of power.

We just lived through a good cop, bad cop routine that would make any Law Enforcement Agency Proud!

This Nation has been divided by Race, Religion, Politics, even Health and Health Care…. Mandatory Masks?

They create and control the narrative through their media talking heads, creating one crisis after another whenever they need a change in public opinion to occur.

‘What is at stake is more than one small country, it is a big idea – a new world order – where diverse nations are drawn together in common cause to achieve the universal aspirations of mankind: peace and security, freedom and the rule of law.’ - George Bush, on Iraq’s invasion of Kuwait, 29 January 1991

And I saw a beast rising out of the sea, with ten horns and seven heads, with ten diadems on its horns and blasphemous names on its heads. And the beast that I saw was like a leopard; its feet were like a bear’s, and its mouth was like a lion’s mouth. And to it the dragon gave his power and his throne and great authority. One of its heads seemed to have a mortal wound, but its mortal wound was healed, and the whole earth marveled as they followed the beast. And they worshiped the dragon, for he had given his authority to the beast, and they worshiped the beast, saying, “Who is like the beast, and who can fight against it?” And the beast was given a mouth uttering haughty and blasphemous words, and it was allowed to exercise authority for forty-two months. …

Many Americans have an empty feeling in their stomachs right now, wondering what happened.’ They’re not alone…

Keep your Faith in the Lord and follow the path he has laid before you.

“If the world hates you, know that it has hated me before it hated you.

It’s always been a big club and only Billionaires are in that club!

Racism is a tool used to divide the people.

What Do You See Happening All Around you?

Is it a Conspiracy Theory or is it Really Happening?

The Most Dangerous Conspiracy Theory in the World

No one knows what is ahead of us, but one thing is sure, they control everything and when they force their will on you, you will obey or suffer the consequences.

The answers you seek will be revealed when you read your Bible….