The full video  (which was first located by Twitter user @AGHamilton29), was summarized by Fox News using a YouTube video of the unedited clip, but — surprise, surprise,  — that video disappeared from YouTube last night.

CBS News’ disgraced news magazine 60 Minutes has been caught maliciously editing comments made by Gov. Ron DeSantis (R-FL) about a fake “pay for play” conspiracy theory, which fake media outlets like 60 Minutes are trying to fabricate out of thin air.

Side Note: DeSantis’ full and complete and reasonable answer was available on YouTube, but now the exculpatory YouTube video has mysteriously vanished after conservatives began sharing it. 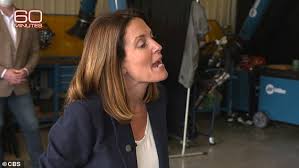 Over Easter weekend, 60 Minutes released a clip of its correspondent Sharyn Alfonsi (pictured, right) basically heckling the governor with her debunked conspiracy theory during a March press conference. But…

The clip released by the fake outlet is maliciously edited to make it look as though DeSantis dodged and bulldozed her question rather than answer it — which he did to the satisfaction of any reasonable person.

“Publix, as you know, donated $100,000 to your campaign,” Alfonsi angrily says. “And then you rewarded them with the exclusive rights to distribute the vaccination in Palm Beach –”

“First, of all what you’re saying is wrong,” DeSantis fires back.

“How is that not pay for play?” Alfonsi shouts back.

“That’s a fake narrative,” DeSantis explains. “I met with the county mayor, I met with the administrator, I met with all the folks at Palm Beach County and I said, ‘Here’s some of the options: We can do more drive-thru sites, we can give more to hospitals, we can do the Publix.’ And they said, ‘We think that would be the easiest thing for our residents.’”

The full video  (which was first located by Twitter user @AGHamilton29), was summarized by Fox News using a YouTube video of the unedited clip, but — surprise, surprise,  — that video disappeared from YouTube last night.

The disgraced 60 Minutes hit-job is such hackwork, The former head of Florida’s emergency management agency — a Democrat — is declaring it hackwork: