United we stand, divided we fall. 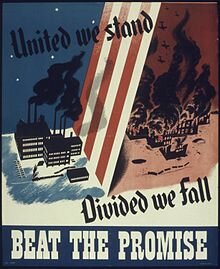 “United we stand, divided we fall” is a phrase used in many different kinds of mottos, most often to inspire unity and collaboration. Its core concept lies in the collectivist notion that if individual members of a certain group with binding ideals – such as a union, coalition, confederation or alliance – work on their own instead of as a team, they are each doomed to fail and will all be defeated. The phrase is also often referred to with only the words “United we stand”. 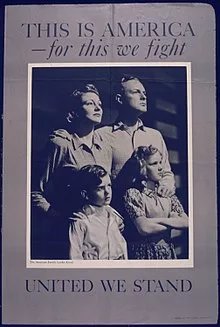 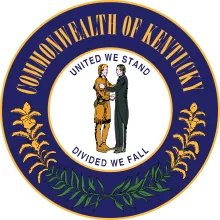 The Seal of Kentucky, featuring the motto.

The phrase has been attributed to the ancient Greek storyteller Aesop, both directly in his fable “The Four Oxen and the Lion”[1] and indirectly in “The Bundle of Sticks”.[2]

The 1911 Encyclopaedia Britannica quotes Robert Grosseteste (d. 1253) saying “It is written that united we stand and divided we fall.”[3]

Use in U.S. history

The first attributed use in modern times is to Founding Father John Dickinson in his pre-Revolutionary War song “The Liberty Song“, first published on July 7, 1768, in both the Pennsylvania Journal and Pennsylvania Gazette newspapers.[4] In the song Dickinson wrote: “Then join hand in hand, brave Americans all! By uniting we stand, by dividing we fall!”.

Patrick Henry used the phrase in his last public speech, given in March 1799, in which he denounced The Kentucky and Virginia Resolutions. Clasping his hands and swaying unsteadily, Henry declaimed, “Let us trust God, and our better judgment to set us right hereafter. United we stand, divided we fall. Let us not split into factions which must destroy that union upon which our existence hangs.” At the end of his oration, Henry fell into the arms of bystanders and was carried, almost lifeless, into a nearby tavern. Two months afterward, he died.

During his unsuccessful campaign against Stephen Douglas in 1858, Abraham Lincoln gave a speech centered on the House divided analogy to illustrate the need for a universal decision on slavery across all states.

Since 1942, this phrase has been the official non-Latin state motto of Kentucky.[5]

On the Missouri flag, the phrase is also written around the center circle.

Examples of political uses outside the U.S. include the following: