The Centers for Disease Control and Prevention released new data late Monday showing a total of 913,268 adverse events following COVID vaccines were reported between Dec. 14, 2020, and Nov. 19, 2021, to the Vaccine Adverse Event Reporting System (VAERS). VAERS is the primary government-funded system for reporting adverse vaccine reactions in the U.S.

Foreign reports are reports received by U.S. manufacturers from their foreign subsidiaries. Under U.S. Food and Drug Administration regulations, if a manufacturer is notified of a foreign case report that describes an event that is both serious and does not appear on the product’s labeling, the manufacturer is required to submit the report to VAERS. 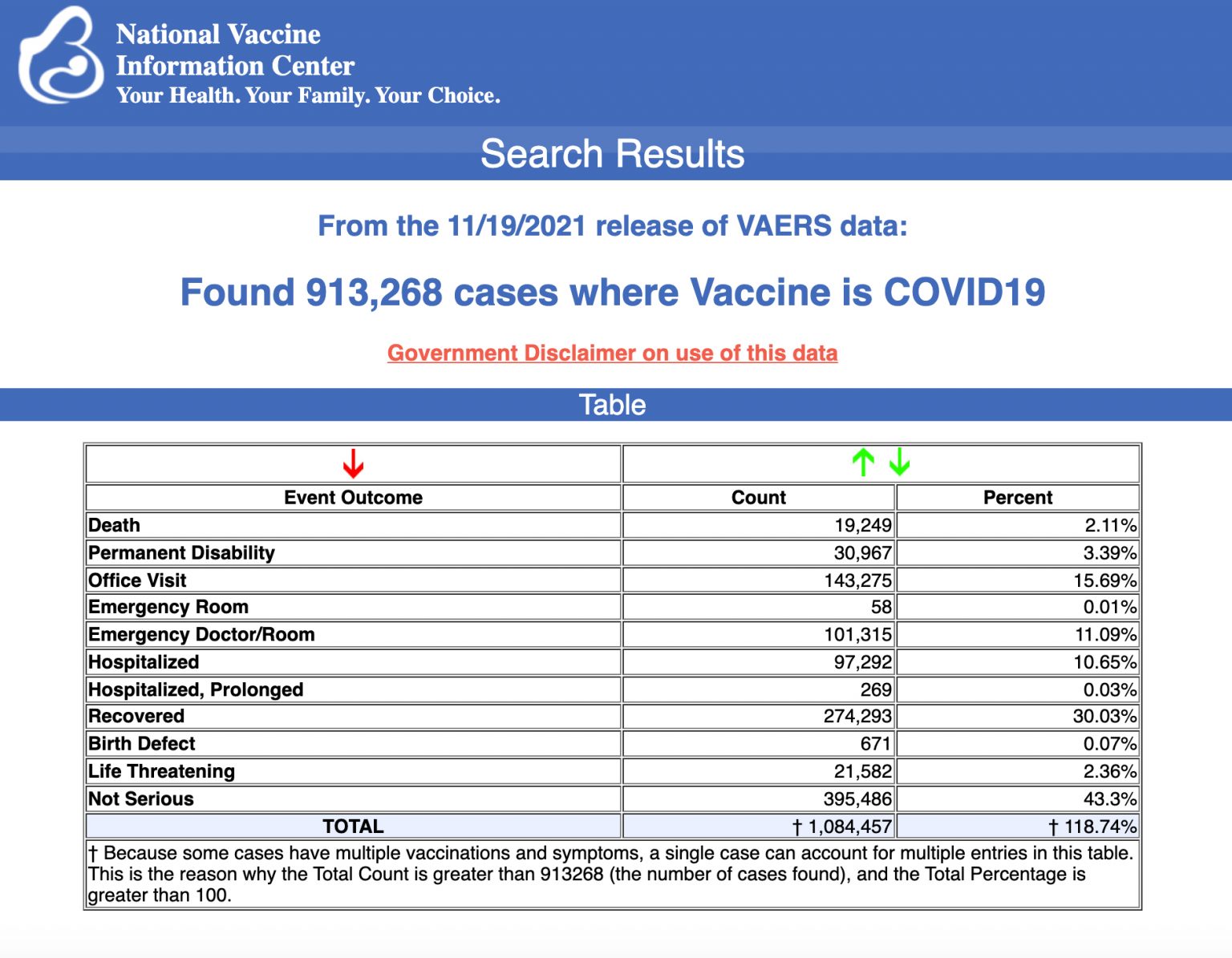 Every Friday, VAERS publishes vaccine injury reports received as of a specified date. Reports submitted to VAERS require further investigation before a causal relationship can be confirmed. Historically, VAERS has been shown to report only 1% of actual vaccine adverse events.

The most recent death involves a 16-year-old girl from Georgia (VAERS I.D. 1865389) who died reportedly from a heart condition and multi-organ failure two days after receiving Pfizer’s COVID vaccine.

Man with natural immunity forced to get vaccinated against COVID to remain on lung transplant list, dies after second dose of Moderna

Bobby Bolin, a 49-year-old Texas man who previously had COVID, was told he would have to get vaccinated against COVID in order to be eligible for a double-lung transplant, even though he had already recovered from the virus.

49-year-old Texas man who recovered from COVID—but was required to be fully vaccinated against virus before being approved for a life-saving lung transplant—died when he developed a pulmonary embolism and heart issues after his second Moderna vaccine.https://t.co/YHCwKb2lIp

After his second Moderna shot, received on April 17, Bolin developed a pulmonary embolism and atrial fibrillation — a heart condition characterized by an irregular heartbeat, shortness of breath, chest pain and extreme fatigue. His health rapidly deteriorated and he passed away Aug. 20, before receiving new lungs.

In an exclusive interview with The Defender, his wife, Amy Bolin, said there was no reason her husband should have been forced to get the vaccine in order to receive new lungs, but unfortunately, he was desperate and very sick.

Amy said she didn’t know what timeline her husband had with his organs, but she saw a complete change in him over four months’ time and doesn’t want others to face the same things they experienced.

In an analysis presented during a meeting of the American Heart Association, Dr. Steven Gundry, a pioneer in infant heart transplant surgery, said mRNA COVID vaccines put many patients at higher risk of a new acute coronary syndrome, such as a heart attack.

The analysis concluded in part that mRNA vaccines “dramatically increase inflammation on the endothelium and T cell infiltration of cardiac muscle and may account for the observations of increased thrombosis, cardiomyopathy and other vascular events following vaccination.”

Thousands of heart-related injuries have been reported following COVID mRNA vaccines, and scientists have established a myriad of heart- and blood-related effects in some patients, including young people.

Among the adverse events linked to the vaccines are thrombosis blood clots and heart inflammation known as myocarditis and pericarditis.

Moderna climbed more than 20% during Black Friday’s short trading session on Wall Street and increased by an additional 10% on Monday.

Shares of BioNTech, which partners with Pfizer to produce COVID vaccines, soared 14% on Friday and were up 3% Monday, as Pfizer gained 6% Friday.

Investors are hoping the vaccine makers will be able to quickly update their COVID vaccines to offer protection for the Omicron variant.

Moderna said Friday it “will rapidly advance an Omicron-specific booster candidate” while Pfizer said it hoped to have an update of its vaccine ready in 100 days if Omicron shows resistance to its current vaccine.

Stéphane Bancel, CEO of Moderna, said in an interview Tuesday current COVID vaccines will likely be much less effective against the new Omicron variant, compared with previous variants, The Washington Post reported.

“I just don’t know how much, because we need to wait for the data,” Bancel said. “But all the scientists I’ve talked to … are, like, ‘This is not going to be good.’”

Bancel said scientists did not expect such a highly mutative variant to emerge for another year or two, noting 32 of the 50 mutations in Omicron involve the spike protein — the area targeted by existing COVID vaccines.

“There can be no doubt that continued mass vaccination campaigns will enable new, more infectious viral variants to become increasingly dominant and ultimately result in a dramatic incline in new cases despite enhanced vaccine coverage rates. There can be no doubt either that this situation will soon lead to complete resistance of circulating variants to the current vaccines.”

As The Defender reported March 26, a combination of lockdowns and extreme selection pressure on the virus induced by the intense global mass vaccination program, might diminish the number of cases, hospitalizations and deaths in the short-term, but will ultimately induce the creation of more mutants of concern.

This is the result of what Vanden Bossche called “immune escape,” which will in turn trigger vaccine companies to further refine vaccines that will add to, not reduce, the selection pressure, producing ever more transmissible and potentially deadly variants.

Vanden Bossche argued the selection pressure would cause greater convergence in SARS-CoV-2 mutations affecting the spike protein of the virus responsible for breaking through the mucosal surfaces of our airways — the route used by the virus to enter the human body — effectively outsmarting the highly specific antigen-based vaccines that are being used and tweaked, dependent on the circulating variants.

Children’s Health Defense asks anyone who has experienced an adverse reaction, to any vaccine, to file a report following these three steps.

Megan Redshaw is a freelance reporter for The Defender. She has a background in political science, a law degree and extensive training in natural health.