As a member of One-Direction, Harry Styles was extremely popular with children and teenagers. Partly because of that, he was chosen to push the all-important gender-blurring agenda. His most photoshoot for Dazed magazine is pure elite sickness symbolism. 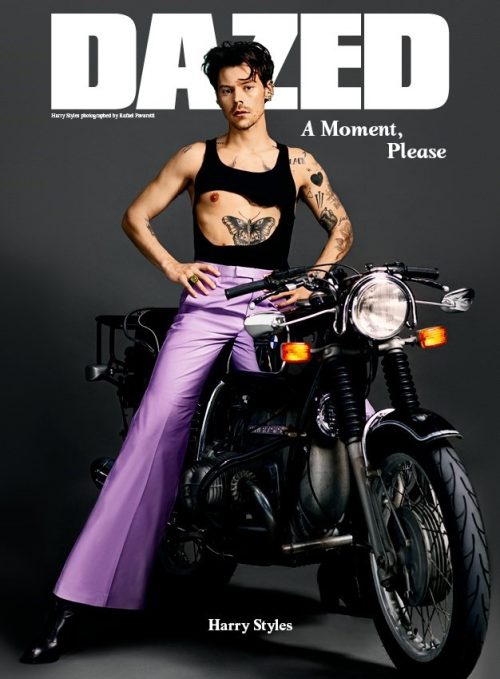 On the picture used for the cover, there’s a special emphasis on his butterfly tattoo – a reference to Monarch mind control. The rest of the photoshoot is all about the soul-deadening cost of being a slave of the industry. 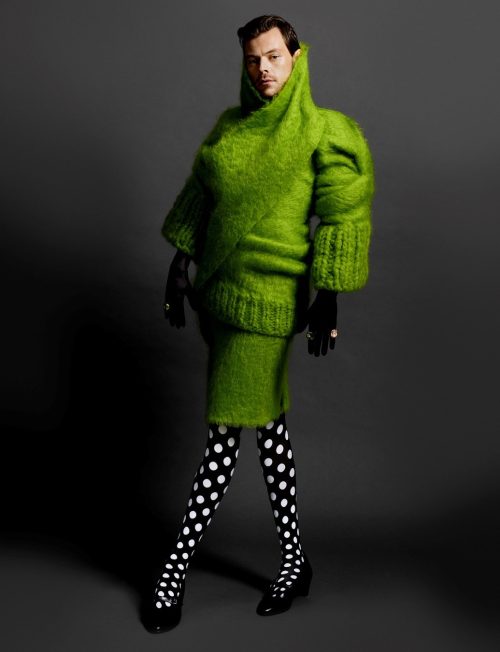 They love to see men in dresses. An emasculated society is a society that cannot rise up against tyranny. 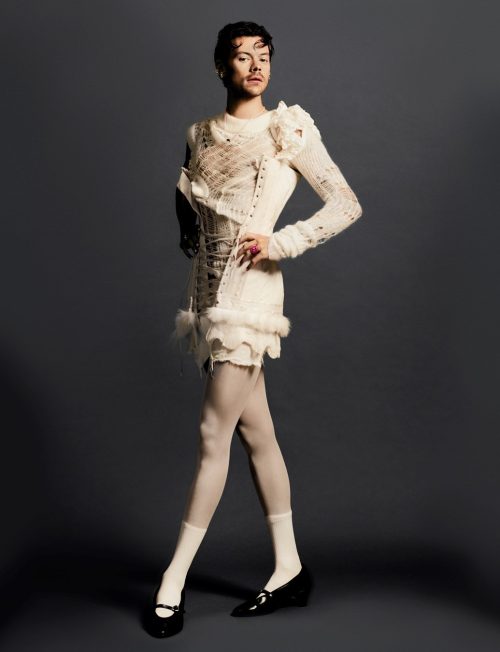 The photoshoot contains about ten ridiculous pictures such as this one. Harry Styles is clearly in the “humiliation” phase of his career.

Speaking of humiliation, what is happening with Kid Kudi? 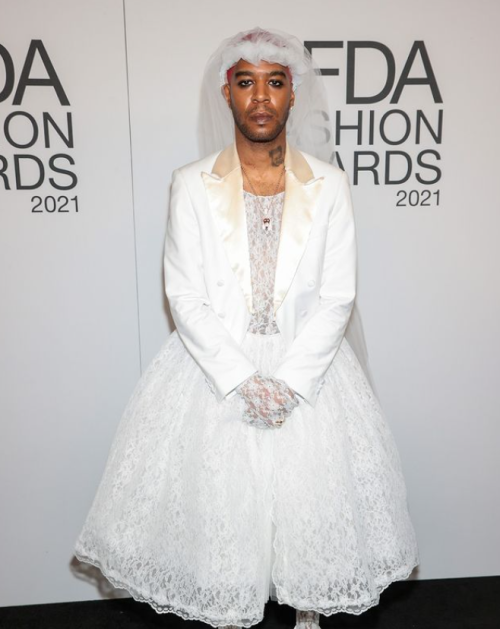 He wore a bridal dress at the CFDA Fashion Awards and, judging by his face, he was not happy with this. Honestly, he looks like he was abused just before putting on that thing. 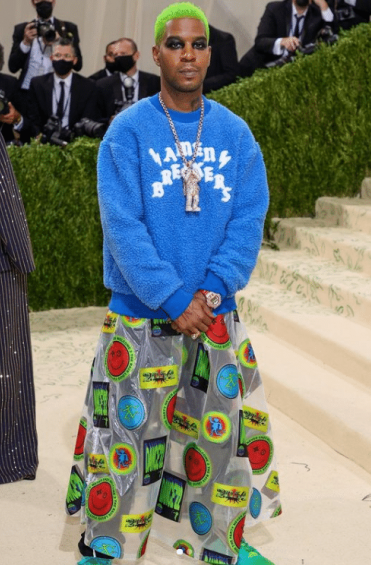 Two months ago, Kudi was walking around at the MET Gala looking like this. He is clearly targeted by this agenda.

Two years ago, I published an article about the highly publicized gender change of Dwyane Wade’s 12-year-old son Zion (who is now known as Zaya). Since then, Zaya is constantly in the mass media spotlight. Why? Talent? No. Gender-blurring agenda. 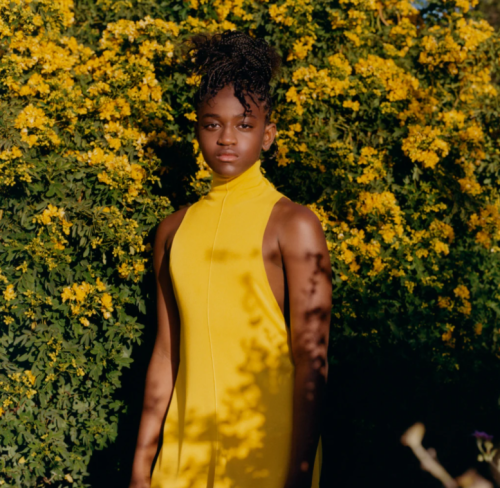 Zaya (who is now 14 years old) posed for i-D Magazine, wearing several outfits. The elite creates “celebrities” out of nothing to push specific agendas. Zaya is a blatant example of this. 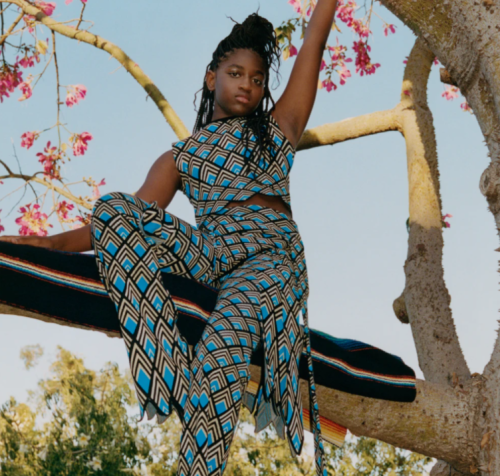 Lil Nas X also spent last year parading around in various dresses. Also, he released a video where he literally grinded on Satan for his young fans to witness. His compliance to the elite’s agenda was rewarded. 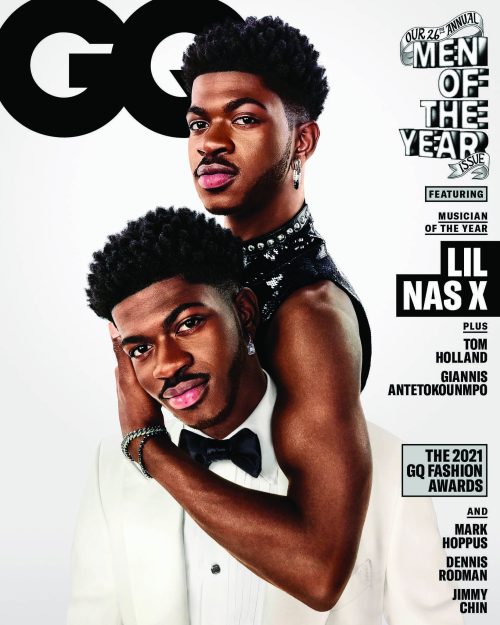 Lil Nas X was on GQ’s “Men of the Year” issue and the cover is pure MKULTRA symbolism. The two Nas Xs (representing alter personas) combined with the dualistic black and white theme are Monarch symbolism 101. In other words, their “Men of the Year” are actually slaves. 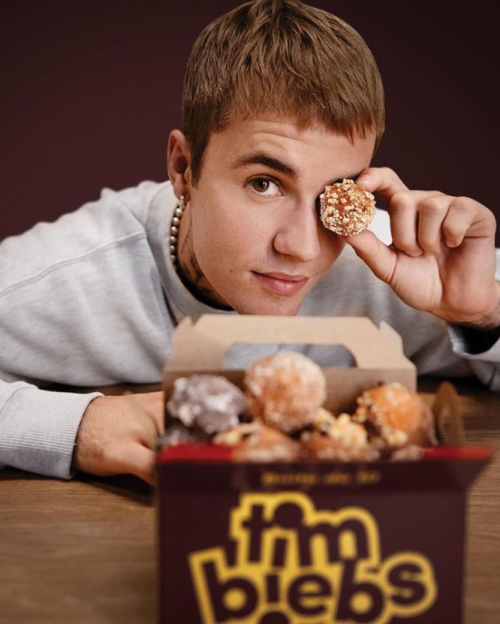 Here are two facts that you need to know about Canada: 1- It is the birthplace of Justin Bieber. 2- There’s a Tim Horton’s restaurant every 500 yards. When the two combined for a marketing campaign, this one-eye sign was plastered all over the country. Yup, Biebs needs to tell you that he’s controlled even when he’s selling donut holes. But wait. Maybe this is not about the one-eye sign. Maybe it’s just a fun way of showcasing the product. 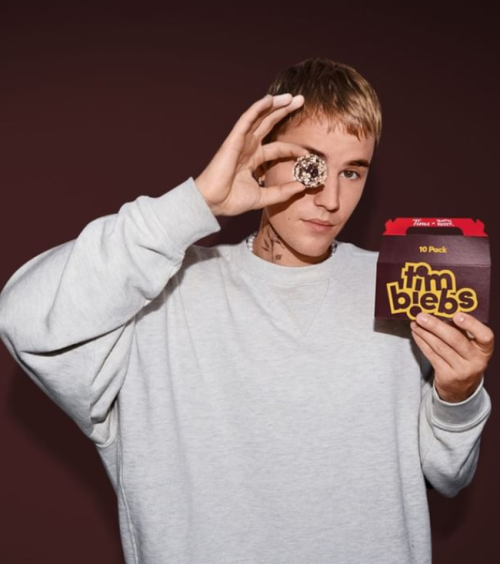 No coincidence. One-eye signed combined with a triple 6 sign as a bonus. Just more proof that the elite is in full control of Beiber’s … donut hole.

Back in 2009, I published my first article about Lady Gaga which explained why she kept doing the one-eye sign. Twelve years later, she is now something of “Grand Priestess” in the industry. But she still has to do the sign. 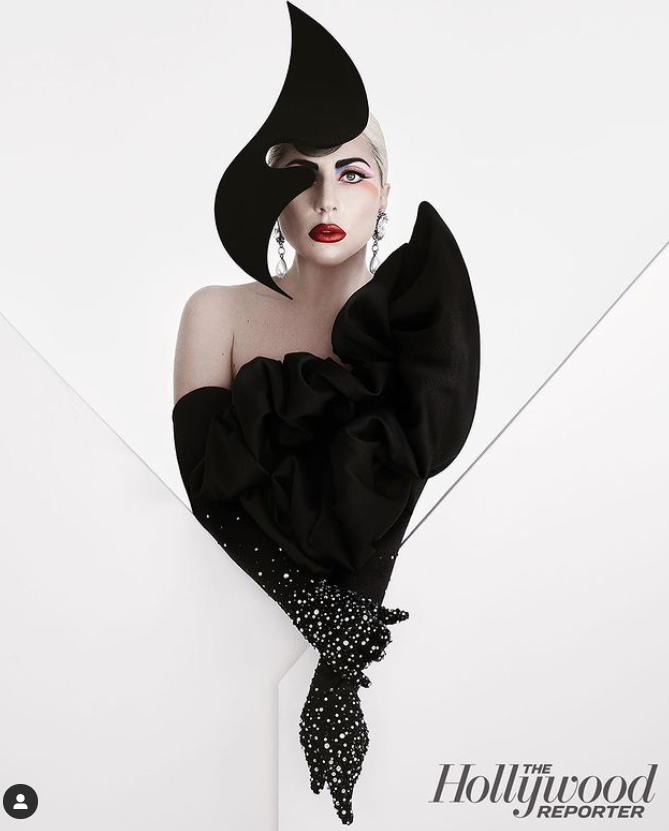 In this photoshoot of The Hollywood Reporter, Lady Gaga’s headpiece creates an all-so clever one-eye sign.

In my article about Squid Game, I explained how it symbolically celebrated the sickness of the occult elite. You better believe that the stars of this series will be used to keep promoting that sickness. 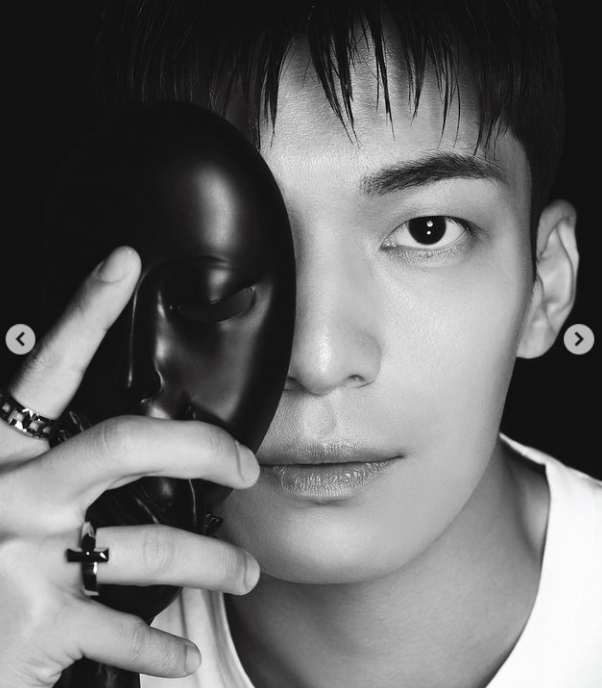 Wi Ha Jun played the role of the police officer in Squid Game. In a photoshoot for Dazed Korea, he uses a mask (representing an alter persona in MKULTRA) to make the one-eye sign. 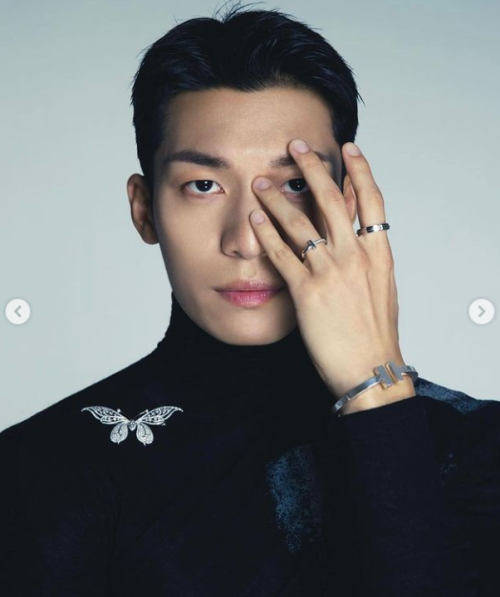 In another pic, he makes another one-eye sign. Also, he wears a prominent butterfly board. Monarch programming. 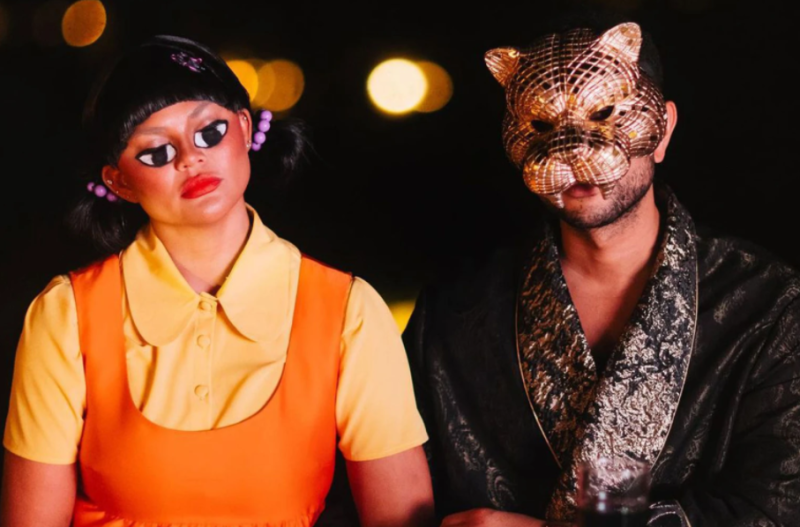 Occult elite couple Chrissy Teigen and John Legend recently threw a massive Squid Game-themed party. Chrissy was disguised as the Red Light Green Ligh girl that got a bunch of people killed and John Legend played the role of the degenerate VIP who paid to watch people die and wanted to abuse a server. 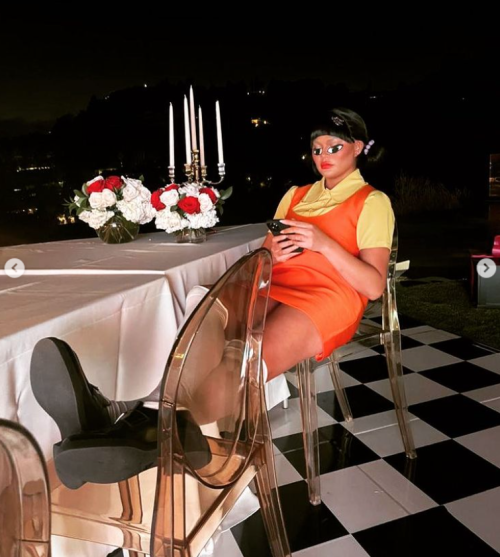 They even recreated the Masonic checkboard pattern floor which symbolically represented a ritual sacrifice in the series. 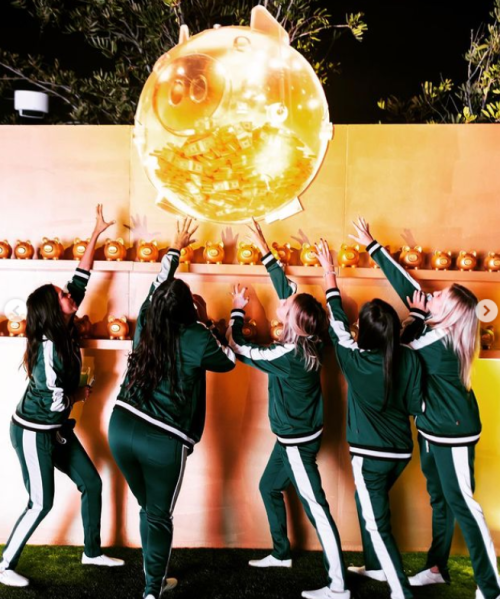 In Squid Game, poor people fought each other for money. The elite finds that very amusing. They’ve also recreated that scene. 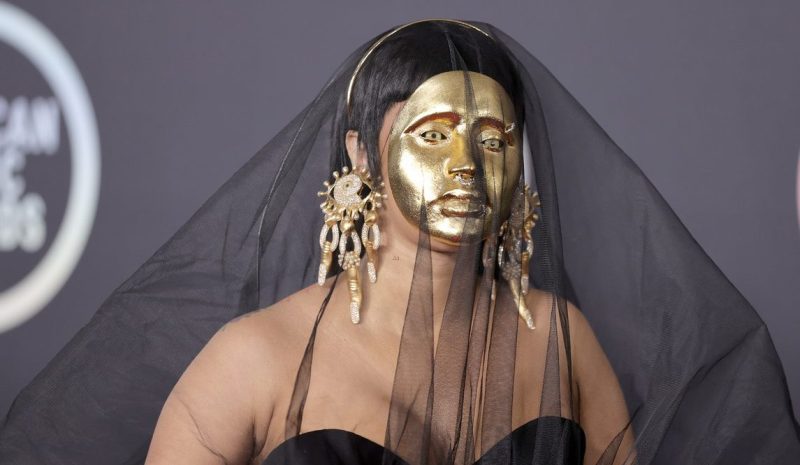 At the 2021 AMAs, Cardi B wore a creepy gold mask with eye-shaped earrings with creepy fingers hanging off them. She also wore yellow contact lenses and a black veil – which are usually worn at funerals. In short: Pure occult elite sickness. Furthermore, there’s a growing trend of celebrities wearing dehumanizing masks. 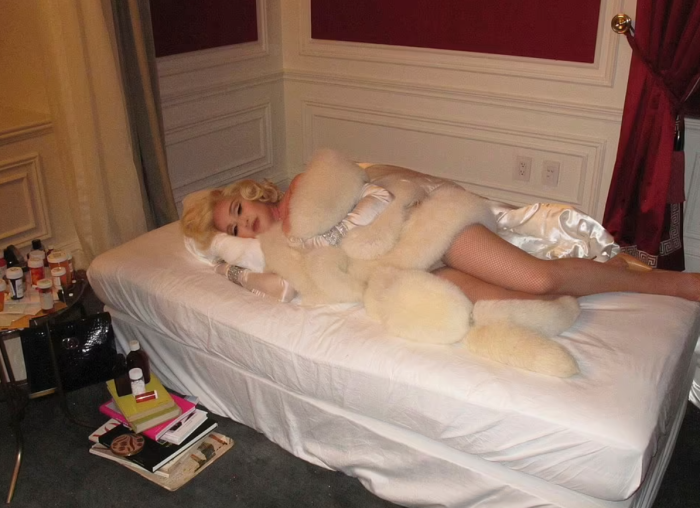 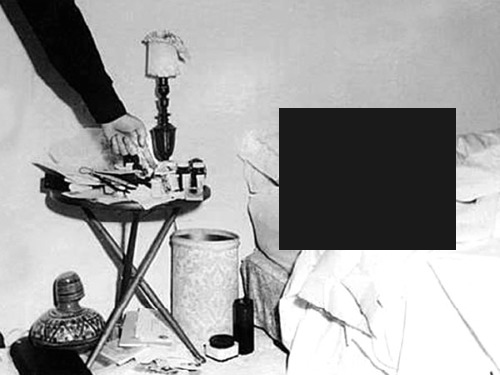 The actual death scene. As explained in previous articles, the occult elite sees Monroe as a prototype of the industry slave. Every female celebrity in the Beta Kitten system must “channel” her. And now, they go as far as celebrating her bizarre and untimely death which could have been a sacrifice.

Speaking of industry slaves, Britney Spears is the most obvious modern-day example. Although she’s been recently released from her father’s conservatorship, she’s most likely still a slave … with a new handler. Her constantly upsetting Instagram account is proof of this fact. 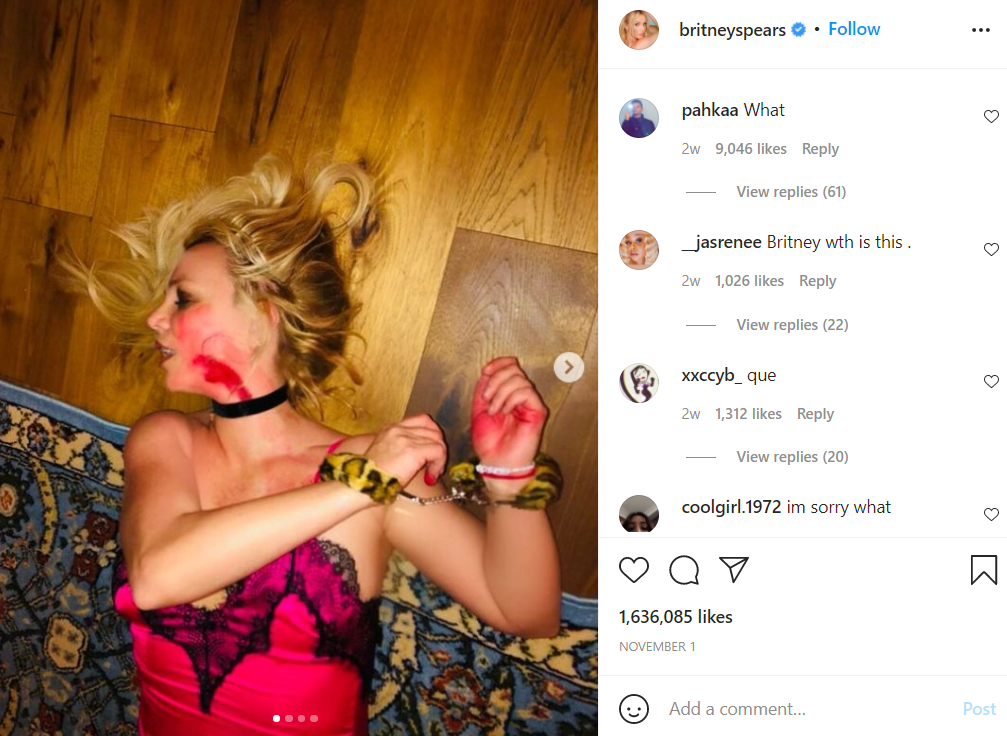 Pics on Britney’s Instagram account showed her laying on the ground and bloody. She is wearing handcuffs with feline prints (a reference to Beta programming). In short, this is yet another picture of her that screams out “industry slave”. She’s not free at all.

Special thanks to everyone who sent in pics.