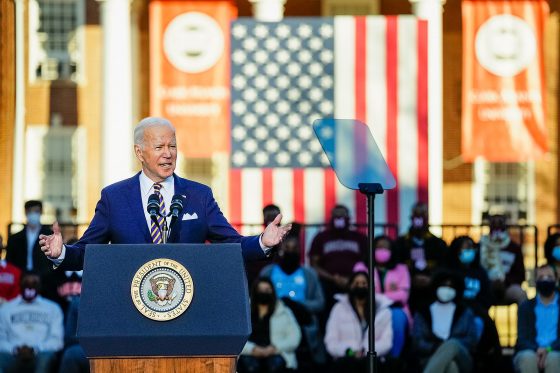 They just have to suffocate anything that smells like freedom, don’t they?  After alienating and persecuting so many other groups of Americans, now the Biden administration is coming after cryptocurrency owners.  Biden administration officials are promising to bring “coherency” to the industry, but just like everything else that they touch it is far more likely that they are going to ruin the industry.  One of the positive things about the cryptocurrency industry has been how relatively free from regulation it has been all these years, but now Biden and his minions are absolutely determined to change that.  In fact, Bloomberg has reported that Biden is going to issue a cryptocurrency executive order as soon as next month…

The Biden administration is readying an executive order for release as early as next month that will outline a comprehensive government strategy on cryptocurrencies and ask federal agencies to determine their risks and opportunities, Bloomberg reported on Friday, citing unnamed sources.

The Biden administration is preparing to release an executive action that will task federal agencies with regulating digital assets such as Bitcoin and other cryptocurrencies as a matter of national security, a person familiar with the White House’s plan tells Barron’s.

If you actively trade cryptocurrencies, it is officially time to starting freaking out, because this could change everything.

The order is set to come under the umbrella of national security efforts as the administration seeks to analyze cryptocurrencies and employ a cohesive regulatory framework that would cover Bitcoin, cryptocurrencies, stablecoins, and NFTs, Barron’s reported Thursday.

The cryptocurrency industry doesn’t pose any sort of a threat to “national security”.

But it does pose a threat to the U.S. dollar.

The news about the executive order emerged a day after the Federal Reserve Board (FRB) released a discussion paper that explores the pros and cons of creating a central bank digital currency (CBDC) for the U.S., which seeks public comment through May 20, 2022. The White House apparently is looking to seize the initiative, taking a central role in setting U.S. government policy on cryptocurrencies.

Could this be the real motive for the coming crackdown?

Do they want to completely neuter the competition so that everyone will use the coming “central bank digital currency” instead?

We are being told that “senior officials” in the administration have already held “multiple meetings” about the new regulatory framework that will soon be imposed.

And we are being told that “the State Department, Treasury Department, National Economic Council, and Council of Economic Advisers, as well as the White House National Security Council” will all be involved in regulating cryptos.

This is really going to happen, and so I urge you to act accordingly.

And apparently this is just the start.  Because digital assets are owned all over the globe, the Biden administration intends “to work with other countries on synchronization” so that no crypto owner can escape their rules…

“This is designed to look holistically at digital assets and develop a set of policies that give coherency to what the government is trying to do in this space,” a person familiar with the White House’s plan told Barron’s. “Because digital assets don’t stay in one country, it’s necessary to work with other countries on synchronization.”

Once Biden got into the White House, it was probably inevitable that this sort of thing was going to happen.

They hate the fact that the crypto industry has thrived outside of their tightly controlled system, and so now they intend to bring it fully under their dominion.

In fact, a major step has already been taken.  Back in November, most crypto owners didn’t even realize that the signing of the “Infrastructure Investment and Jobs Act” was going to change things for them so dramatically…

Before U.S. President Joe Biden signed the Infrastructure Investment and Jobs Act into law in November, many groups spoke out against a provision that broadens the tax code’s definition of “broker.” But there is another hidden cryptocurrency provision in this new law that amends part of the tax code in a way that will greatly expand financial surveillance, criminalize certain cryptocurrency transactions and, in my view, violate the Fourth Amendment of the U.S. Constitution.

This provision alters Section 6050i of the tax code, which requires businesses that receive more than $10,000 in cash to collect identity details of the person paying in cash and report the transaction to the government. Failure to comply can be a felony punishable by up to five years in prison. The Infrastructure Investment and Jobs Act expanded 6050i to include anyone who, in the course of conducting business, receives over $10,000 in digital assets.

If you actively trade cryptos, you should read those two paragraphs again.

Because you really don’t want to end up committing a felony “punishable by up to five years in prison”.

Ultimately, millions of crypto owners are not going to understand these new rules, and they are going to be an enormous hassle to try to comply with…

Currently, the U.S. government collects information from cryptocurrency exchanges and other institutions that serve as the on-ramps and off-ramps where people buy, sell, exchange and store cryptocurrency. The updated law will impose reporting requirements on many other participants in the cryptocurrency ecosystem – from developers to traders to miners to end users. These participants will be required to collect sensitive identity details of counterparties, securely handle that sensitive information and turn it over to the government – or potentially face criminal penalties.

Nobody can deny that the crypto industry is headed for big trouble.

Each new regulation they impose will suffocate the industry a little bit more, and it won’t be too long before the stage will be perfectly set for the introduction of “Fedcoin”.

This should deeply anger all of us, but most Americans are so dazed and confused that they don’t even care that our freedoms are eroding a little bit more with each passing day.

The post Red Alert For Crypto Owners! Biden Is Going To Use A New Executive Order To Come After You In A Major Way appeared first on The Economic Collapse.