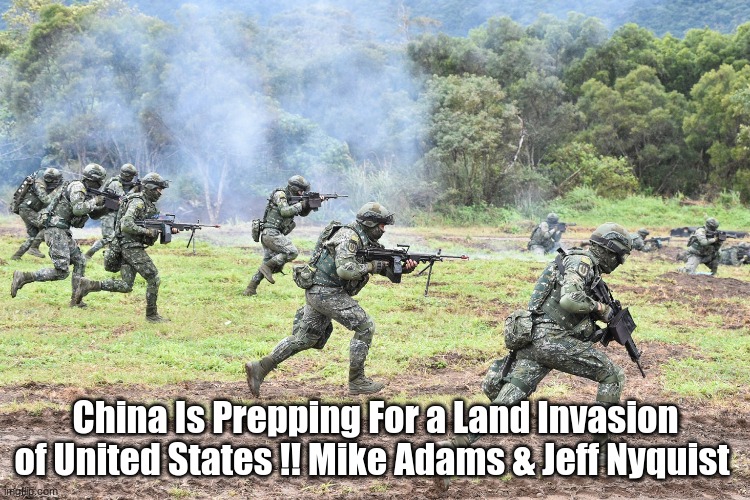 Get wise people the time is NOW….NOBODY IS COMING TO SAVE US – the time is now to form local militias as outlined in the Constitution. The time is now to take over local governments NOT under the rule of constitution and secure them – then after local governments are secure, move to state government, then regional blocks of Constitutional areas in preparation for the inevitable – THE WRITING IS ON THE WALL – NATO or other foreign troops will be here likely by this summer, possibly fall to take advantage of the coming winter to force people to comply with NATO’S ‘keep the peace’ and enforce martial law. This will be confiscation of all firearms, and send those who had them to ‘re education camps’ to never been seen again – if they get that WE ARE DONE – YOU CAN KISS YOUR KIDS ASSES GOODBYE!

IF YOU’RE THAT SELFISH, YOUR ASS WILL BE ALREADY LONG GONE DIRT NAPPED. How long do we wait? Do you think you will ‘vote’ them out? what a joke…they will keep rigging elections by mail and never step down now unless its by force. History proves this …THE TIME IS NOW TO FORM LOCAL MILITIAS AS OUTLINED IN THE CONSTITUTION AND TAKE OVER ANY AND ALL LOCAL GOVERNMENT THAT IS NOT UPHOLDING THE CONSTITUTION. TO TAKE OVER LOCAL GOVERNMENTS AND THEN MOVE TO STATE GOVERNMENTS UNTIL THE ENTIRE STATE IS UNDER CONSTITUTIONAL GOVERNMENT CONTROL – STATE BY STATE UNTIL THE CONSTITUTIONAL FORCES OF THE UNITED STATES GETS TO D.C. THE WAY TO VICTORY IS LEAVE THE ‘BLUE CITIES ALONE…

CUT OFF FOOD TO BLUE CITIES VIA TRUCKING AND ANY EXISTING RAIL. ALL FOOD STORES WOULD NEED TO BE GUARDED. A CITY HAS APX 3 DAYS OF FOOD SO CONSTITUTIONAL STATES WOULD THEN HAVE TO PREPARE FOR INVASION BY THOSE AGAINST THE CONSTITUTION….LIKELY BACKED BY NATO BLUE HELMETS AND NATO WEAPONRY…IT WILL BE 2A TIME….BUT AT THAT POINT THEY WILL BE WEAKENED AND IT WILL BASICALLY BE U.S PATRIOTS VS NATO….so whats their agenda all about?

It’s a plan of world domination and the only thing in the way is USA – USA is armed and ready to go ‘Patriot’ in the Constitutional states, so the Deep State / Illuminati knows they cant win. Obama administration did a model and it proved armed US citizens would WIPE OUT all Feds, agents, Military within 2 weeks according to their model. So the Deep State plan is to gain approval or ‘consent’ for their plan – to manufacture consent’ and sell the Satanic agenda and get everyone to ‘go along.

The Illuminati runs the Satanic agenda, and the end game of the agenda is world enslavement of humanity and forced implanted artificial intelligence in order to enable the enslavement through the implanted ‘operating system’. They have been trying to use COVID lock downs to try to digitally enslave the world – there is nanotechnology in the virus that’s basically an operating system – its the mark of the beast – the NWO – its the NAZI WORLD ORDER – Now, the NWO plan for world enslavement is in its final stages – we must fight, its win or die – but their plan to usher in a new global world order is not working -

SO NOW ITS A SCARE WITH ‘MONKEYPOX’ ….Don’t fall for the Bait – its the Deep State!!