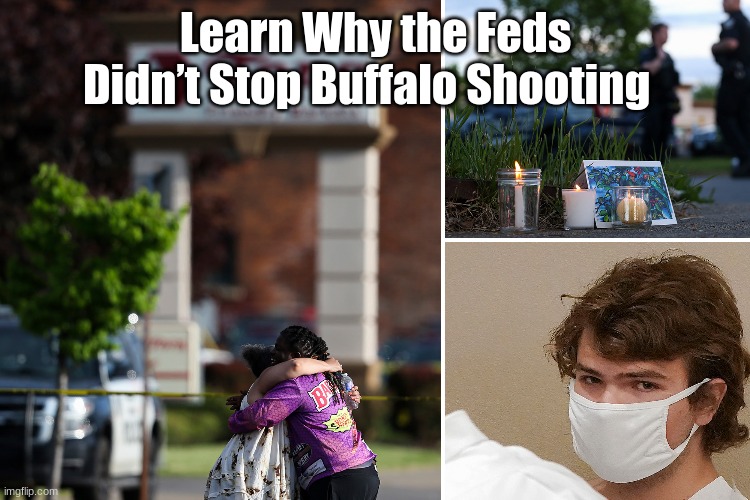 Alex Jones breaks down why the feds did not act to prevent to recent shooting in Buffalo.

Points to a history of investigative negligence by the government of “lone wolf” attackers before they went on to commit heinous crimes.

State authorities red-flagged the Buffalo mass shooting suspect as a “troubled” individual a year ago after he threatened to shoot up his high school, according to government reports.

Police had been called on the Buffalo shooting suspect, 18-year-old Payton Gendron, in June 2021 after he threatened to commit violence at his high school in Broome County.

From The Buffalo News:

In June 2021, police in Broome County were called by officials of a local high school who told them Gendron had threatened violence in comments made to fellow students.

“A school official reported that this very troubled young man had made statements indicating that he wanted to do a shooting, either at a graduation ceremony, or sometime after,” the same government official familiar with the case told The News.

State Police were sent to investigate and Gendron, under a section of state mental health laws, was referred for a mental health evaluation and counseling, the official said.

This is not an anomaly in the FBI’s history. It in fact appears to be a pattern of negligence. During the Barack Obama presidency, Sen. Rand Paul, R-Ky., grilled FBI Director James Comey about the “known wolf” problem — of 14 Islamist attacks in the U.S. during Obama’s tenure, the FBI had been aware of at least 12 before the violence erupted, and did nothing.

For example, the 2009 Fort Hood shooter, who killed 13; the Boston Marathon bombers of 2013 who killed three and injured 264; and the Pulse nightclub shooter who killed 49 people and wounded 53 more. All were known to the FBI and several had been interviewed by the FBI before they went on killing sprees.

The FBI had also been warned numerous times about the Parkland, Florida school shooter, before he killed 17 and injured 17 more in 2018. It also knew beforehand about the 2018 Nashville, Tennessee Waffle House shooter, who killed four and injured two more, and the 2020 Nashville RV bomber.

Will it be revealed that the federal authorities like the FBI have procedural fingerprints linked to the Buffalo mass shooting?

After all, the FBI practically created the “extremist” kidnapping plot against Michigan Governor Gretchen Whitmer leading up to the 2020 presidential election.

The political timing of the “racially-motivated” Buffalo shooting that killed 10 people just months before the midterm elections is also suspect, especially when Joe Biden repeatedly characterized “white supremacy” as the “most lethal threat” in America.

Meanwhile, the media doesn’t cover the United Nation’s announcement that 100 million people of the Third World face starvation as a result of the COVID lockdowns and Great Reset supply chain breakdowns, or the thousands killed at the U.S. southern border from drug cartels, or hundreds of thousands dead from drug overdoses, because it’s not politically expedient for Democrats, and in fact actually highlights Biden’s policy failures as puppet president.