On April 23, 2022 , Extinction Rebellion (and other radicals like Rise and Resist) gathered at the 72nd st entrance to Central Park where they prepared to March for Climate Justice in the streets of Manhattan. 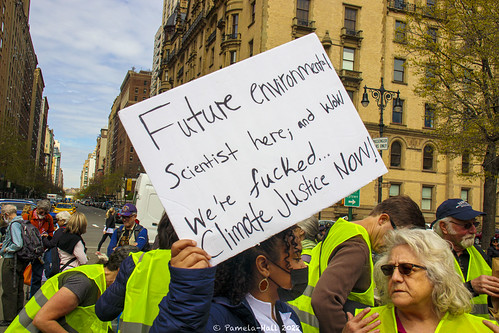 CLIMATE is Racist! “The climate and ecological emergency is a trauma inflicted on all beings by white supremacy…  to unlearn embodied, racialized behaviors. 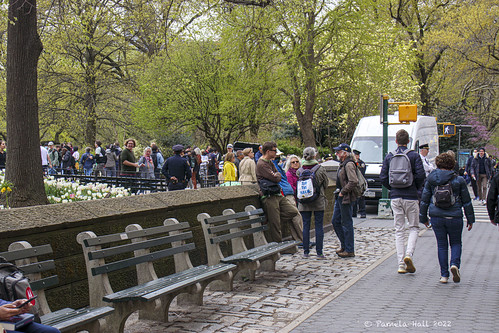 The entrance to the park was very busy with pedicabs and strollers, not just the climate radicals, even an ambulance attempting to pass as the protestors listened to a few speakers before they “Marched for Science“. 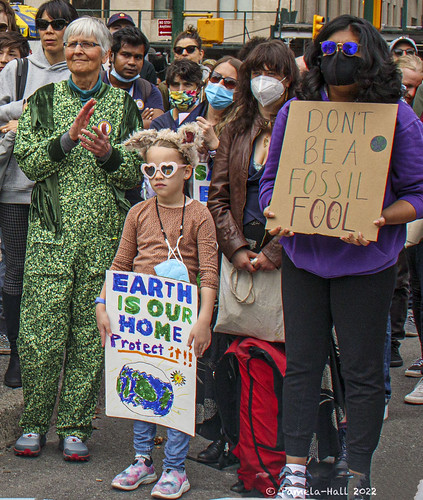 A steady propaganda diet, fed relentlessly for decades in our schools and by the media has filled generations with fear. The Planet is doomed without Climate Justice. Part 2 slide show :

.Video # 1- First, before the climate protestors “Marched for Science”, a short video with lots of chanting:

“What do we want? Justice. If we don’t get it shut it down.” “No more Coal. No more Oil. Keep your (climate) in the soil.”  and of course:  “Hey Hey Ho Ho Climate Change has Got to Go”

And signs. Lots of signs:

“Climate Action Now; Fight For Our Future; Dayenu ; Enough with the Climate Conspiracy; Ban Fracking Now; The Climate Crisis is Here” and my personal favorite: “Destroy the Patriarchy, Not the Planet.” 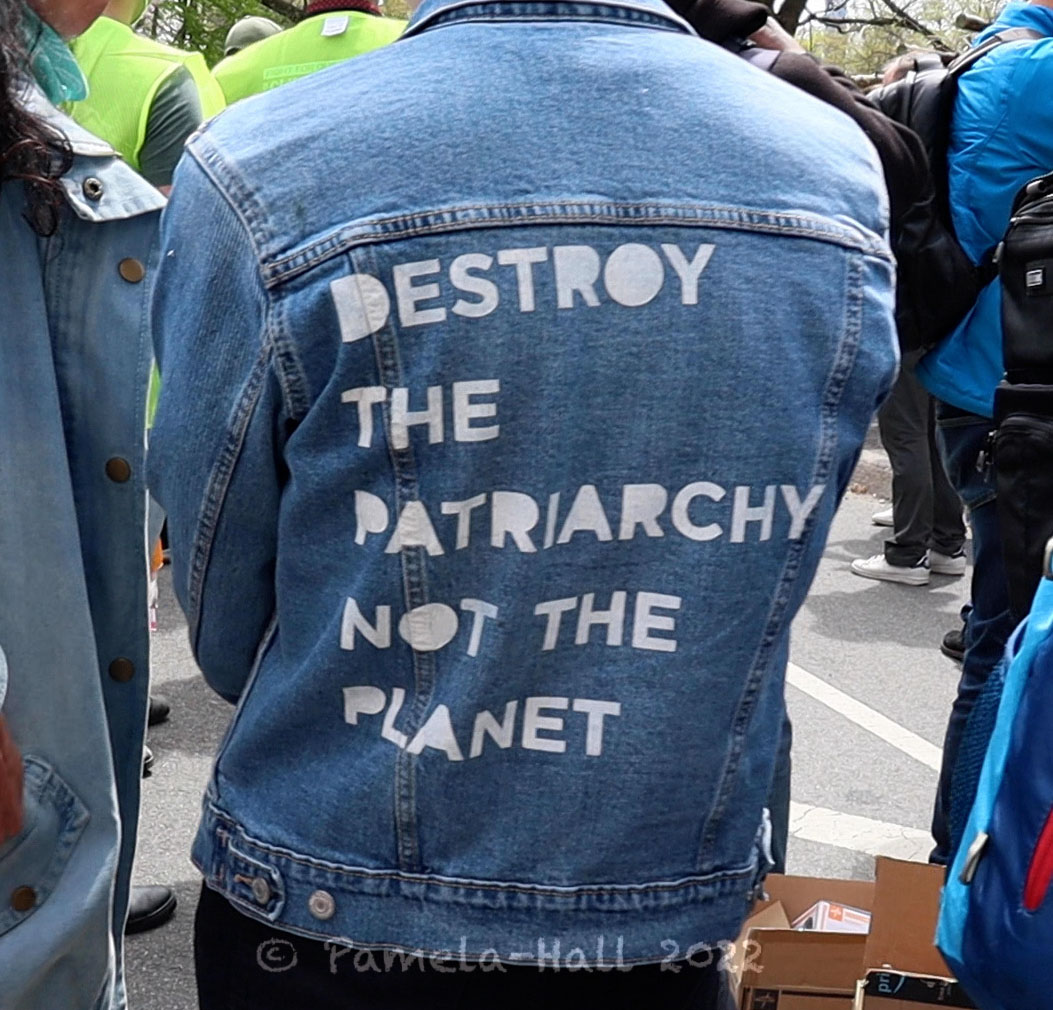 “Demand climate justice for all communities. Demand it now. Science not Silence.”

Video 3 – A very political young man with a very POLITICAL speech, (excerpted) exposing the depth of his hard-core indoctrination:

Re the midterm elections.  “To decide the balance of Congress. Our Senate. Our House of Rep. It is on us to demand a better future by showing up at the ballot.

50 years of empty promises. VOTE so we can ensure a livable planet. This is what democracy looks like.“

“Science is Political “(again) “But it should never be partisan. No matter what party is in power, we should have science evidence policy on the table. We should remain vigilant no matter who is in power. Currently in NY State,  3 Democrat leaders who claim to Follow the Science. It has not been enough. We need to know our worth and to ask for more. To ask for more climate action now. We are experiencing not just climate change, but a climate crisis. And we need to act like it. We need bold and consistent action to save our planet and our species.

We cannot play politics with our environment; we need bold and consistent action to reverse climate change. This year at the Federal level, with the mid-term elections, to vote, hold accountable, get things passed like the Build Back Better Bill and the Voting Rights Act, which together will us fight Climate Change. We need climate action now, not in five years.

[lastly] …  cut back on our emissions from our fossil fuel buildings. This is critical. 70% of fossil fuels emissions from the city come from our buildings. We are one of the biggest polluters in the country. Hold all leaders accountable no matter what party they are in; no matter how much they try to distract us mediocre and symbolic actions. We will not be appeased. We know our worth. the worth of our planet.“

Video 5 – Jillian is a virologist and mother of two. She mentions pandemic parenting and how the pandemic has intertwined the two.

“In the Spring of 2020, while her colleagues at Mt. Sinai worked round the clock, she was at home with her 3 and 6 yrs old children. Day care and schools were closed, the city was on lock-down. While quarantined and home-schooling her two small children, she was also answering Covid questions from scared friends and family -  fighting the endless disinformation about the pandemic.“

She shared that she was grateful for the questions, it meant people actually cared about the data.

“After more than two years of this pandemic, I know how easy it is to let cynicism win. Parents are exhausted, particularly of under 5 yrs olds. We faced school closures. had to weigh risks and benefits of sending our un-vaccinated kids to ‘in-person’ schools. It’s been scary and demoralizing.Parents of kids who are too young to be vaccinated feel ignored and betrayed. Masks mandates being dropped while there is still no vaccine approved for kids in their age group. I hear your rage and frustration. Demand change from our political leaders. As adults it is our responsibility to leave the world a better place for our children than we inherited. Finally, Science should be for everyone. I encourage all my …. scientists to break out of the bubble. The most meaningful science in the past two years … it’s been communicating with my friends, my family and my social circle. Those conversations matter.”

Video 6: 14 yrs old student activist named, Theo.   After the crowd chanted “Stand up, Fight Back” Theo told us of a Walk-Out For Covid Safety that he led.  they are upset that Mayor Adams ignored their demands:

“K95 masks for all. Covid testing for every student in our socio-economic status. Quality air-filtration in all our schools.  (unclear “…. “) a new generation of scientists to combat any future pandemic we may face’ Today we march and tomorrow you will listen.”

.10th Day of the Rebellion as rebels take midtown

“We are heading for catastrophe. This is the type of actions we must take to stop the #ClimateCrisis before it will be to late … …chanting for action on climate change.” FOX news; Bryant Park  sit in on the corner of 42nd and 6th Ave. [Extinction Rebellion]

The climate activists tried to stop  N.Y. Post from publishing.

“We fight for a just world and stand in solidarity with the struggle for Black Lives. Take action for Black Lives and support radical Black leadership. End white supremacy now.” #BlackLivesMatter

What lies ahead (maybe/maybe not)

Twitter users who do not believe in climate change will no longer be able to advertise such beliefs on the social media platform.

“misleading advertisements on Twitter that contradict the scientific consensus on climate change” will be prohibited along side other types of banned content, which include campaigns that contain violence, profanity or personal attacks.

misleading information about climate change can undermine efforts to protect the planet.”

“We believe that climate denialism shouldn’t be monetized on Twitter, and that misrepresentative ads shouldn’t detract from important conversations about the climate crisis,” [N.Y. Daily News]

The climate and the ecological crisis is a justice crisis
EARTH TO MEDIA : THIS IS AN EMERGENCY!
Organizing is the antidote to despair