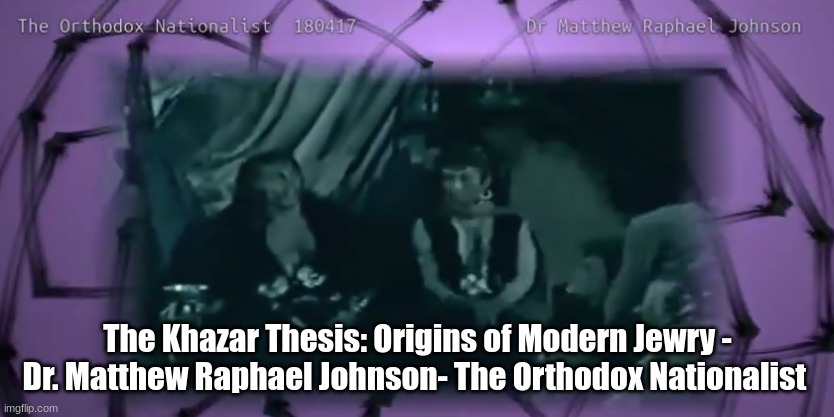 Dr. Matthew Raphael Johnson (The Orthodox Nationalist) defends his thesis from recent attacks. I found the information enlightening and helps to understand the “Synagogue of Satan”. I’ve a feeling the ills of the world can be directly attributed to a Khazarian Mafia which is still very active today. Is Khazaria the homeland or another homeland of of the Jews?

Is Ukraine the New Khazaria? – The House of Cards is crumbling and lies upon lies are being exposed – with all that’s going on, all things are possible.

The video also speaks on Arthur Koestler and his intention to remove the “Deicide Charge” and drive hatred away from the converted Jews, but the Jews themselves have a history of being expelled from Nations because of their crimes.

Arthur Koestler – The Thirteenth Tribe: The Khazar Empire and its Heritage Paperback – (Aug. 3 1976)

This book traces the history of the ancient Khazar Empire, a major but almost forgotten power in Eastern Europe, which in the Dark Ages became converted to Judaism. Khazaria was finally wiped out by the forces of Genghis Khan, but evidence indicates that the Khazars themselves migrated to Poland and formed the cradle of Western Jewry. To the general reader the Khazars, who flourished from the 7th to 11th century, may seem infinitely remote today. Yet they have a close and unexpected bearing on our world, which emerges as Koestler recounts the fascinating history of the ancient Khazar Empire.

At about the time that Charlemagne was Emperor in the West. The Khazars’ sway extended from the Black Sea to the Caspian, from the Caucasus to the Volga, and they were instrumental in stopping the Muslim onslaught against Byzantium, the eastern jaw of the gigantic pincer movement that in the West swept across northern Africa and into Spain. Thereafter the Khazars found themselves in a precarious position between the two major world powers: the Eastern Roman Empire in Byzantium and the triumphant followers of Mohammed. As Koestler points out, the Khazars were the Third World of their day.

They chose a surprising method of resisting both the Western pressure to become Christian and the Eastern to adopt Islam. Rejecting both, they converted to Judaism. Mr. Koestler speculates about the ultimate faith of the Khazars and their impact on the racial composition and social heritage of modern Jewry. He produces detailed research to support a theory which could make the term ‘anti-Semitism’ become void of meaning.