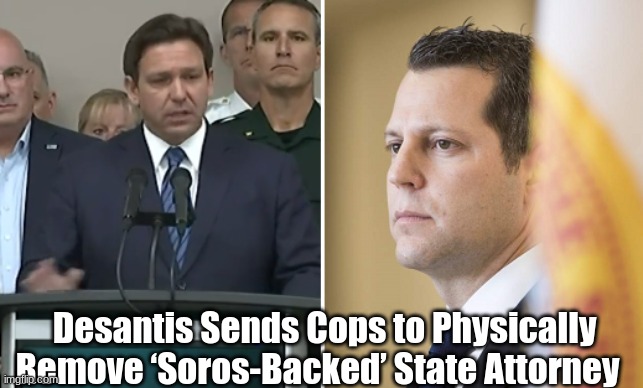 The right kind of round ups are now beginning.. It’s time ot remove the Soros rats fro all of the offices they hold.. Next, trials!!

According to TYLER DURDEN:

Florida Governor Ron DeSantis has suspended State Attorney Andrew Warren for ‘picking and choosing which laws to enforce based on his personal agenda,’ and has appointed Susan Lopez as his replacement during the suspension.

Warren, who had served the Thirteenth Judicial Circuit, has most recently refused to follow state policy criminalizing abortion in the wake of the Supreme Court’s decision to overturn Roe v. Wade – and repeatedly refused to enforce laws cracking down on child sex-change surgeries, according to DeSantis.

The liberal state attorney also declined to prosecute 67 protesters arrested in George Floyd demonstrations, and said in 2017 that he would only pursue the death penalty “in the very worst cases,” and not where “mental illness played a role.“

“We are suspending Soros-backed 13th circuit state attorney Andrew Warren for neglecting his duties as he pledges not to uphold the laws of the state,” DeSantis’ office said in a statement, per Fox News.

Update: DeSantis sent state police to physically remove Warren from his office, “with access only to retrieve his personal belongings, and (ii) to ensure that no files, papers, documents, notes, records, computers, or removable storage media are removed from the Office of the State Attorney…”