Harry Styles was featured on this site numerous times because he is one of the unfortunate faces of the gender-blurring agenda in pop culture. As a member of One Direction, Styles was adored by children and pre-teens. This popularity was used by the powers that be to expose young people to something very important: Men wearing women’s clothes. They REALLY want children to be exposed to this. 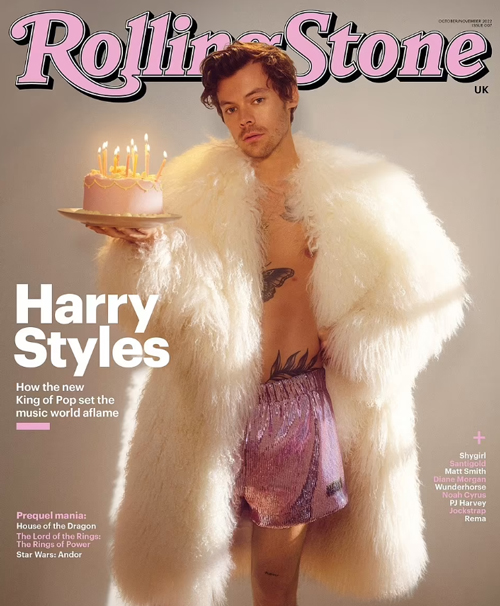 Styles was recently featured on the cover of Rolling Stones UK wearing yet another feminine outfit. Other details in this pic (including his butterfly tattoo) give off a Monarch sex kitten vibe. In an ironic twist, the cover calls Styles “the new king of pop”. That’s because the industry likes to give ridiculous titles to its biggest slaves. 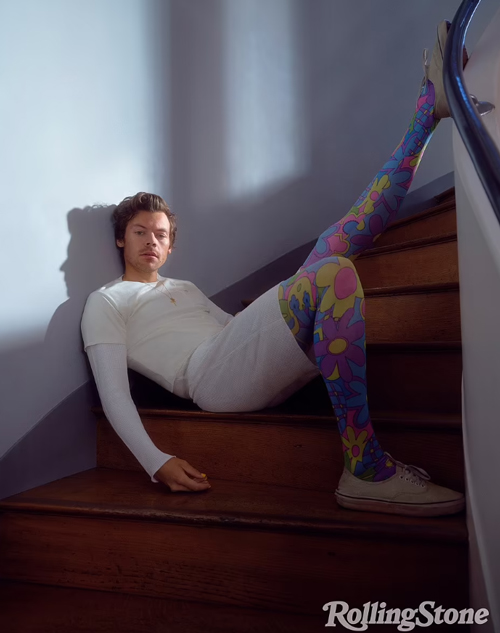 This is what you have to do for the media to call you the “king of pop”.

Bad Bunny is basically the Latino version of Harry Styles (I’ll never, ever use the term “Latinx”). Like styles, he was “selected” to expose his fans to the men-in-dresses agenda. Because masculinity is bad. 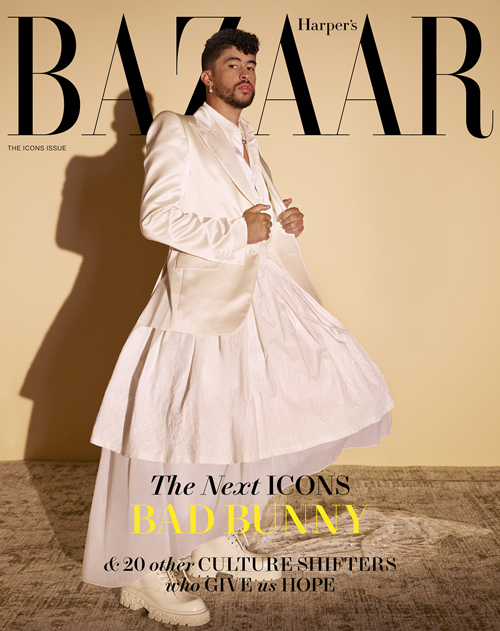 On the cover of Bazaar, Bad Bunny wears something that looks like a wedding dress. That’s what happens when you’re “married” to the industry. The cover calls him an “icon” and it also says that he “gives us hope”. He actually accomplishes the exact opposite. He’s proof that the music industry (and the elite in general) is overrun by absolute psychopaths who are obsessed with seeing men in dresses.

Sadly, this agenda is not limited to pop stars. 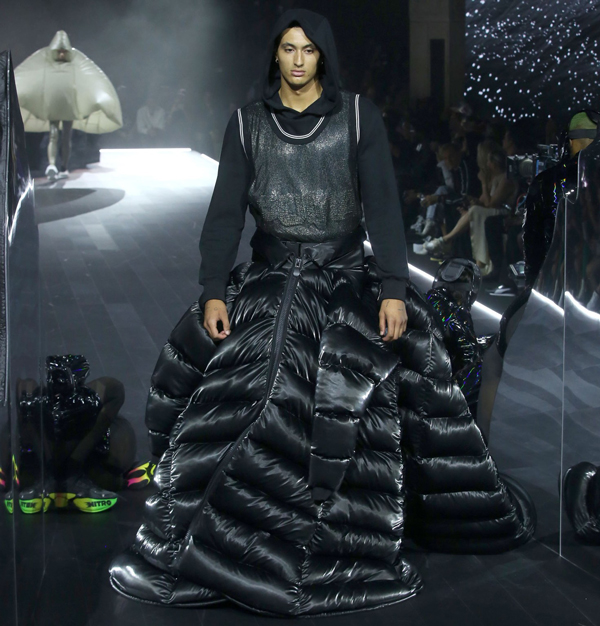 NBA player Kyle Kuzma modeled this puffy skirt at a fashion show. Look at his face. He’s dead inside. This is the new price of fame.

Speaking of the price of fame, Kim Kardashian needs to pay it once in a while. 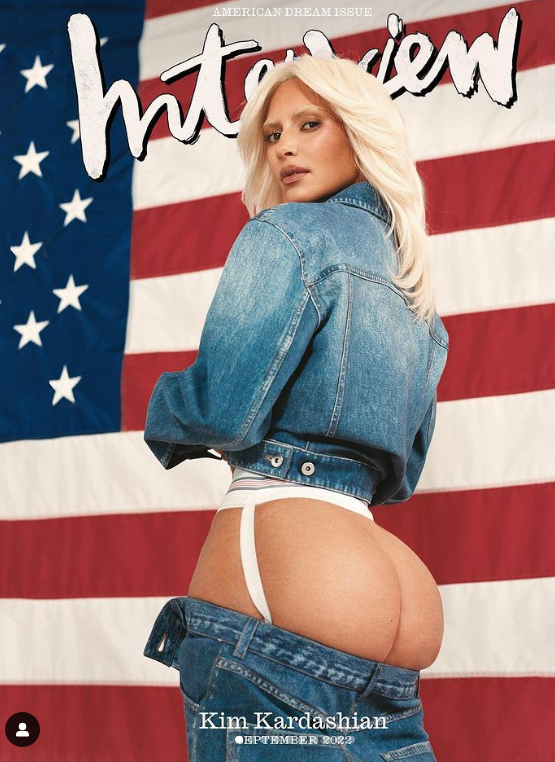 Kardashian was featured on the cover of Interview magazine and it’s all highly symbolic. First, this 41-year-old woman with four children has to appear bare ass on the cover of a magazine. In my recent article about the 2022 VMAs, I observed that there was an unhealthy focus on butts and they keep being used as a symbol of the artists sexually submitting to their elite rulers. That’s pretty much what’s happening here. The fact that she’s on the cover of the “American Dream” issue is yet another sad, ironic joke. 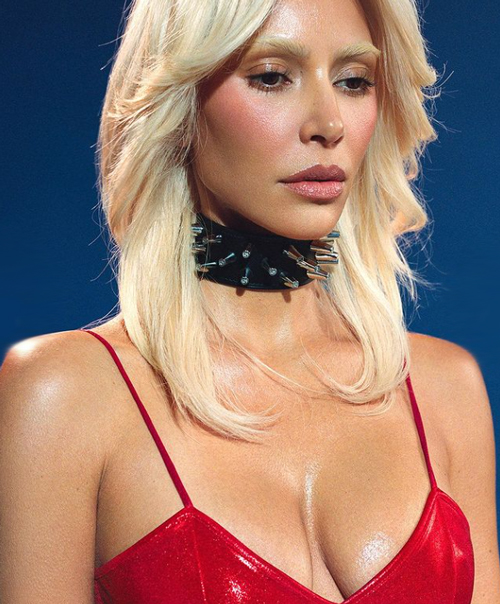 Interestingly enough, another ex of Kanye West bleached her eyebrows and it looks equally weird and offputting. I’m not a fashion aficionado, but I would describe this trend as the “retarded alien” look. 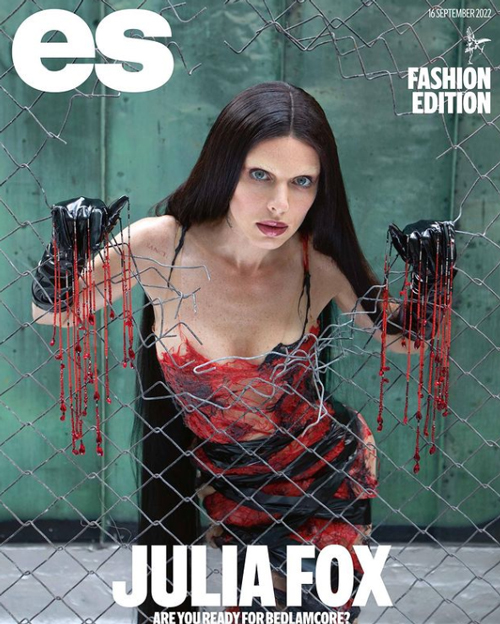 As seen in previous SPOTMs, everything about Julia Fox points to industry slavery. This cover ES magazine is all about pain, torture, and being covered in blood. They love human blood.

Jamie Campbell Bower starred in The Twilight Saga, Harry Potter, and Stranger Things. In other words: Young people love him. Partly for this reason, everything about him is highly satanic. 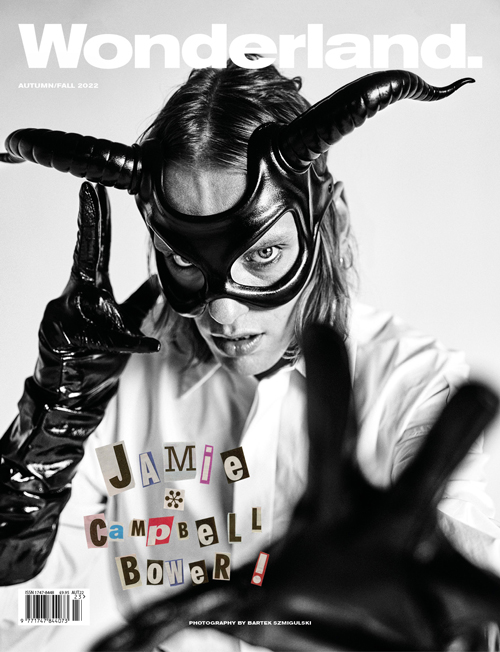 On the cover of Wonderland, Bower wears a horned satanic mask. Some might say: “Well that doesn’t mean he’s into actual satanism”. Let’s keep going. 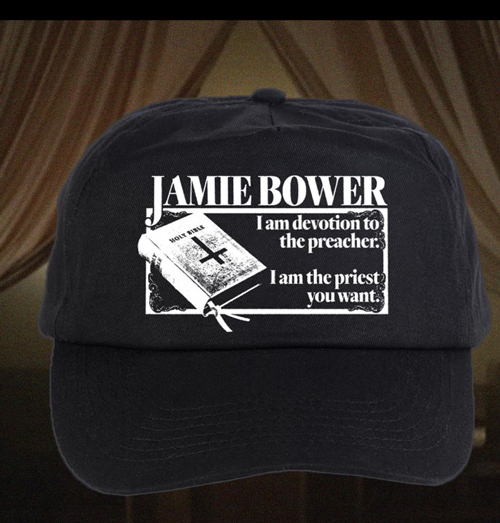 This is merch sold by Bower: An inverted cross on a Holy Bible. It all revolves around blatantly satanic themes. This is what young girls who think he’s cute see when they look up his Instagram page. 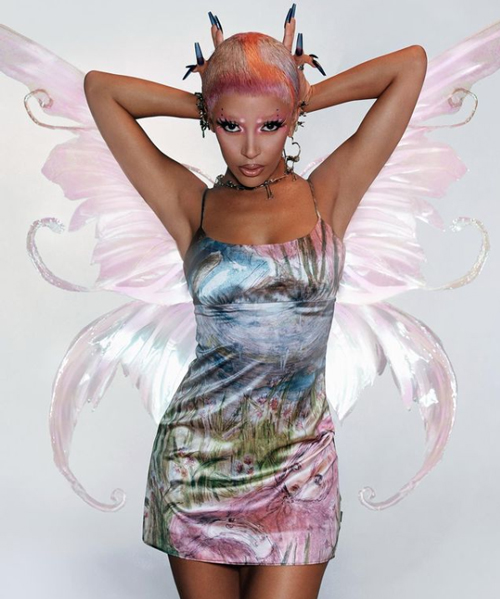 This is what Doja Cat fans see on her Instagram: VC 101. She does devil horns with butterfly wings behind her. The meaning of this artistic masterpiece: She’s owned by the satanic Monarch system.

As usual, the one-eye sign popped up everywhere in the past month. In fact, there are so many pictures that I can only post a small fraction of them. Nevertheless, here are some of the most painfully obvious ones performed by some of the world’s biggest stars. 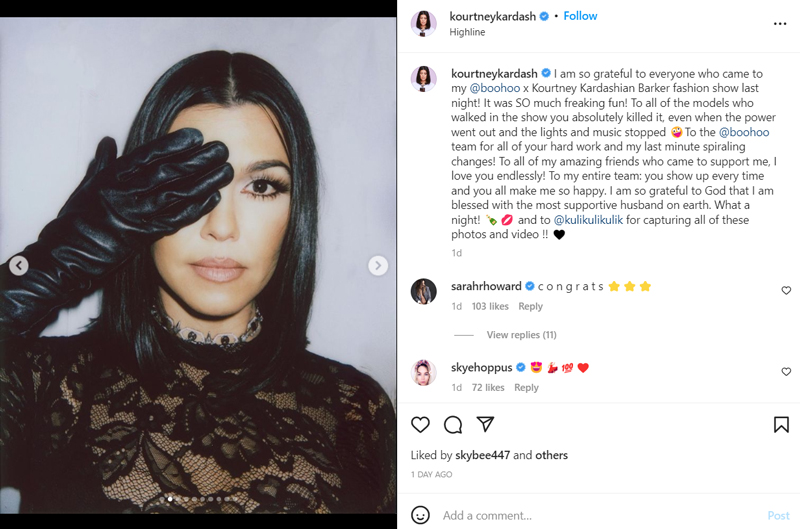 Kourtney Kardashian recently promoted her fashion show using this pic. Look at it. It’s nothing else than a big, fat one-eye sign.  There’s nothing else going on with that pic. It’s a sign of allegiance and submission.

Viola Davis is the star of The Woman King. I did not watch this movie, but I already know that it perfectly fits the agenda of promoting hatred and division between races and sexes. That’s the only reason why it was made. However, the Hollywood hacks who were trying to gain social credit points by making this movie forgot one important detail: In real history, Dahomey’s warriors actually HELPED slavers. Oopsie. 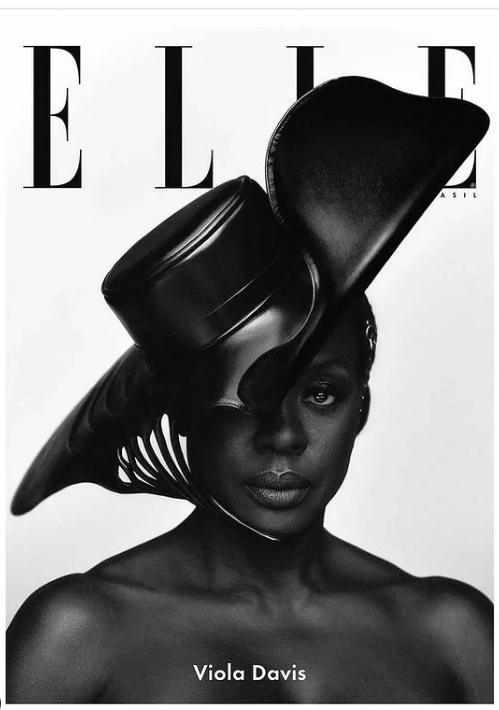 To promote this movie, Viola Davis was featured on the cover of ELLE Brazil. There’s a (very clever) one-eye sign to let you know that she’s a tool of the elite.

But wait. Maybe this is not a one-eye sign. Maybe it’s just her wearing the most ridiculous hat in human history … which happens to hide one eye. Alright, let’s look at another pic from that photoshoot. 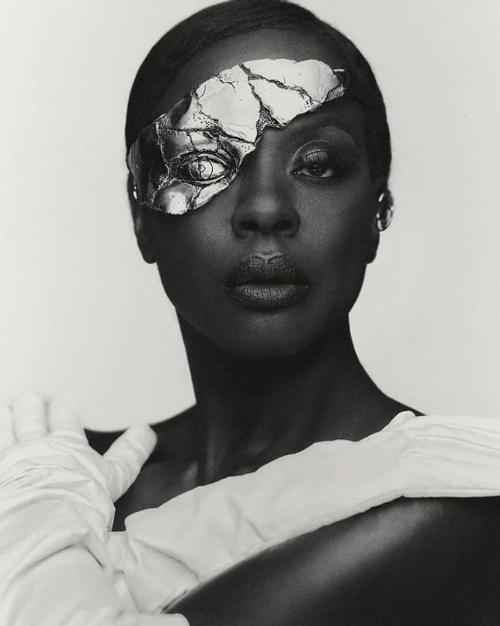 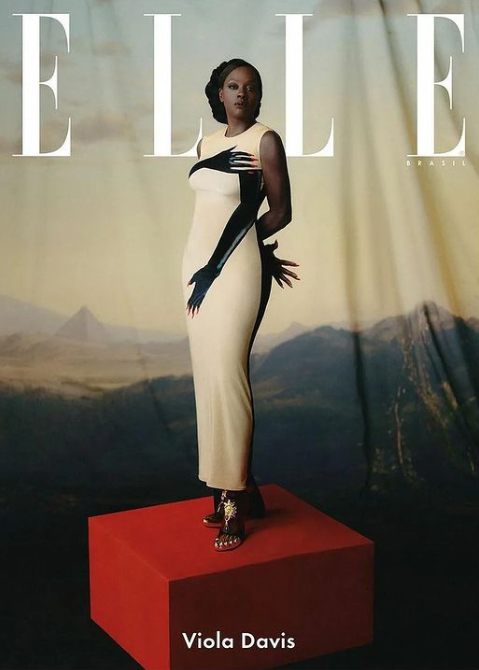 In another pic, Viola wears a symbolic dress where creepy hands go across her chest and on her privates. The hands represent the “handlers” who control her. Moral of the story: The Woman King is not about “empowerment”, it is about the exact opposite. 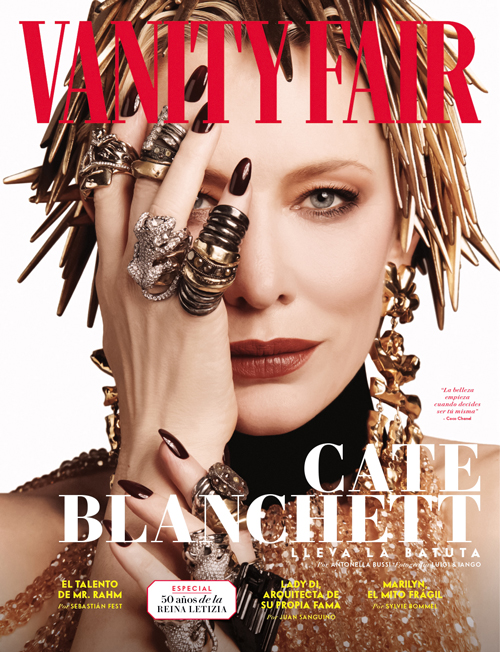 Cate Blanchet is a very respected actress. After decades in the industry, she amassed tons of awards and remains one of the highest-paid actresses in Hollywood. Despite all of this, she still needs to show submission to the elite by doing the one-eye sign on the cover of Vanity Fair. 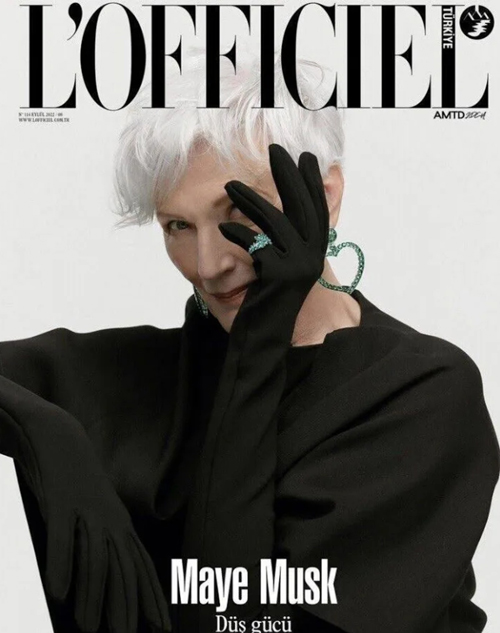 Maye Musk is Elon Musk’s mother. She does the one-eye sign all the time. 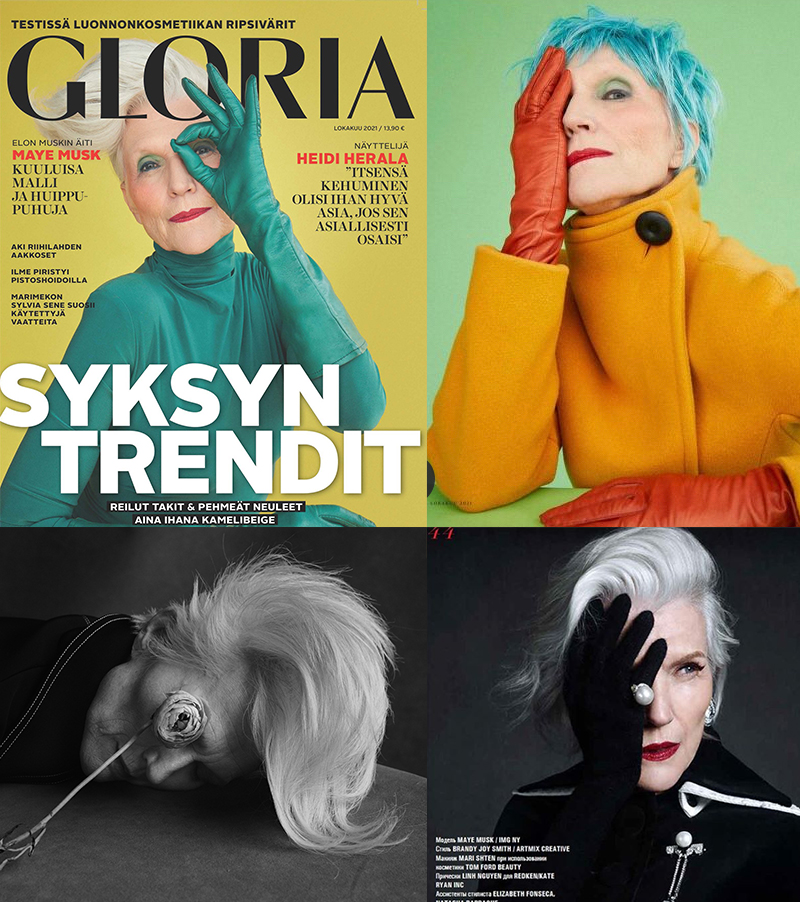 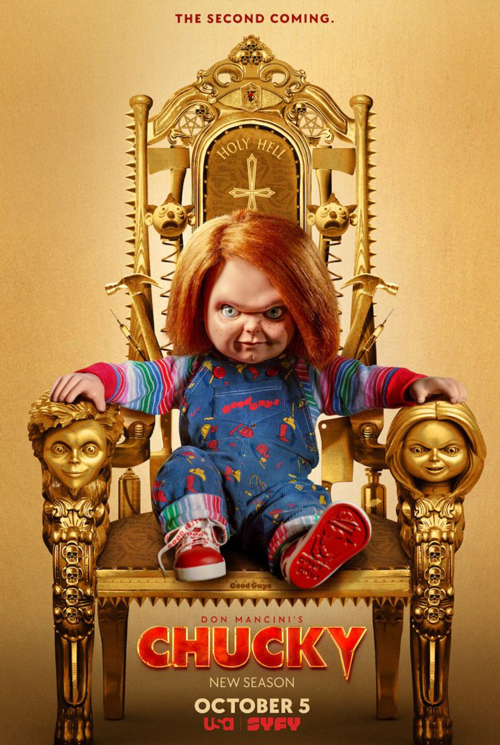 This is the poster for the upcoming Chucky series. While this character was always evil, this poster is all about the occult elite’s specific brand of satanism. At the very top, we see the words “The Second Coming”, which is a mockery of Jesus. On Chucky’s throne, we see a couple of inverted pentagrams, the words “Holy Hell” above an inverted cross, and a couple of syringes. In short, this is yet another product that’s been formatted to fit the occult elite’s very specific set of symbols.

There’s a very annoying agenda happening around the world: The promotion of bug eating. As usual, the powers that be insidiously target children with their indoctrination. 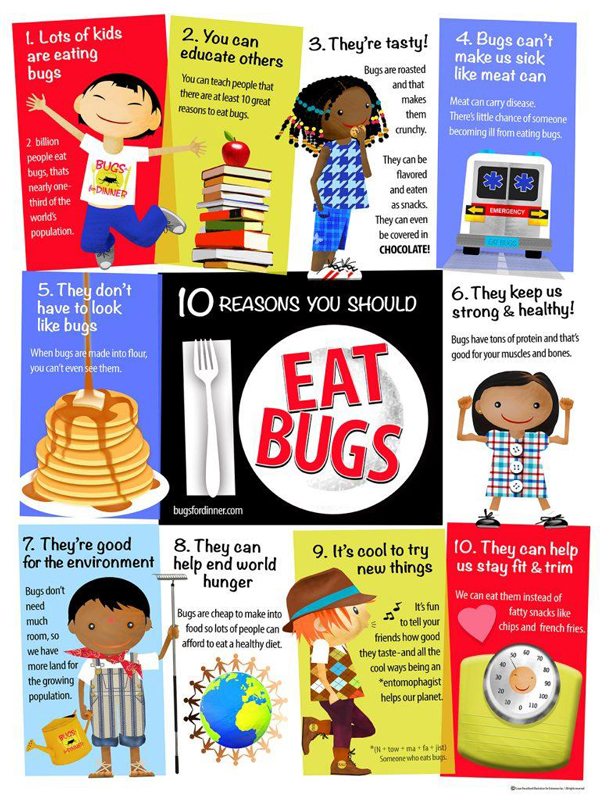 This poster exists in California public schools. It tells children to eat bugs using manipulative reasons such as A) Everyone else is doing it B) It’s cool and, of course, C) You can dip cockroaches in chocolate. A full article is required to explain the reasons for this agenda and it is coming soon. 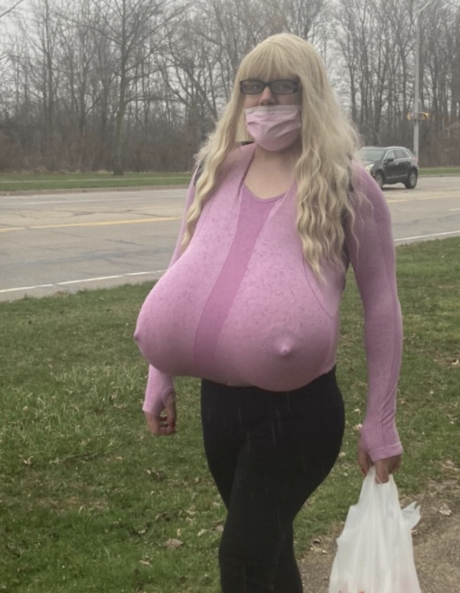 This is a teacher at a high school in Ontario Canada. As you can see, he’s walking around with ridiculously gigantic prosthetic breasts. When parents of students at that school understandably asked “what in God’s name is happening?”, the school board defended him and media articles popped up about “body shaming” and “transgender rights”.

This is what students have to look at: Giant nipples protruding from a bra-less, skin-tight shirt. If a real woman showed up to school looking like that, she’d probably be fired on the spot. However, “trans rights” extremism is turning society into a complete joke where common sense is continually questioned and challenged. 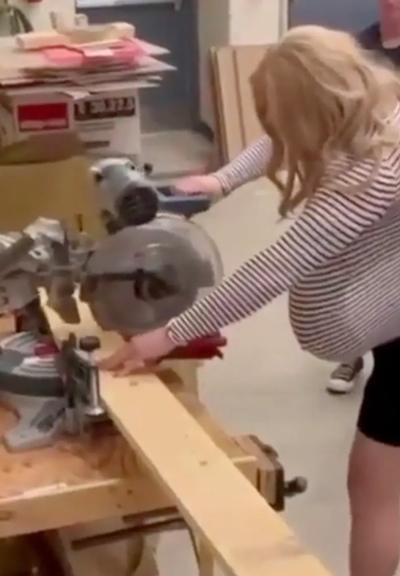 Special thanks to everyone who sent in pics. Except for the last one. It pissed me off.