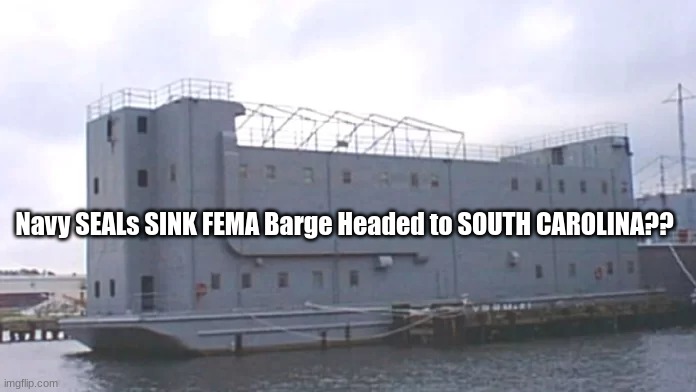 As weakened Hurricane Ian moved toward South Carolina Friday afternoon, so too did something more ominous and lethal than any storm to have made landfall on the United States. A Federal Emergency Management Agency transport vessel, colloquially called a FEMA barge, followed Ian’s track at a safe distance, just beyond the storm’s outer bands. These mammoth, towering specters, several hundred feet long and several stories tall, have often trailed landfalling hurricanes up and down the Eastern Seaboard or along the Gulf of Mexico. FEMA calls them hospital ships or temporary relocation shelters, but those descriptions are deceptive. Hurricane exiles who have been aboard these ships, and lived to talk about it, have seen the horrors that lie within the bulkheads: guillotines and torture apparatus reminiscent of the Middle Ages.

In August 2017, after Hurricane Harvey laid waste to parts of South Texas, a teenage boy witnessed his estranged father, a homeless vet down on his luck, being dragged aboard a FEMA barge berthed at Port Arthur, Texas. He had somehow entered and exited the ship without drawing attention, and although he never found his father, he later said what transpired inside the ship reminded him of the movie Hostel, a satanic torture-porn film we’d rather not discuss.

Those events could’ve played out again this weekend, if the FEMA barge had anchored near Charleston or Georgetown, South Carolina.

But as Ian’s eye hit the coast and FEMA shadowed the storm, U.S. Navy SEALs aboard a Los Angeles-class submarine had eyes on FEMA. From a lockout tank atop the sub, the SEALs, armed with demolitions and aided by SEAL Delivery Vehicles (motorized underwater sleds), deployed into dangerous water and intercepted the laggard barge. They set explosives along the hull, then retreated to a safe distance and remotely detonated the charges. The FEMA barge was approximately 35 miles east of Georgetown, South Carolina, when it foundered and sank in rough seas.

All SEALs made it safely back to the submarine, a source in General David H. Berger’s office told Real Raw News.

According to him, Gen. Berger held several conversations with his U.S. Naval Special Warfare Command (USNSWC) counterparts in advance of the mission. The general, aware of FEMA’s ongoing misdeeds in Southwest Florida, took decisive action upon confirming the presence of a FEMA barge in Ian’s wake. He had asked USNSWC whether assets were in the vicinity and available for rapid deployment. Fortunately, they were, and the operation was greenlit.

“The destruction of the FEMA barge has probably saved a lot of lives,” our source said. “Unfortunately, FEMA has several of these, and they’re often docked in Venezuela when not in use. When FEMA knows a storm is coming, they mobilize these hellish ships.”

Asked why the Los Angeles-class submarine didn’t simply torpedo the barge, which would’ve been safer and not endangered the SEALS, our source said, “I understand it was considered. I don’t know why they went with SEALs instead of torpedoes. I wasn’t involved in operational planning.”