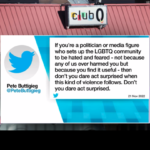 Despite the fact there was no evidence of any specific political motive in the Colorado Springs Shooting, the entire mainstream media cartel ran with the hyper-partisan talking point that this incident must have been a ‘far-right hate crime’ against the gay community. However, soon after the event, new details and evidence emerged which quickly debunked the initial mainstream politically-motivated narrative. But that hasn’t stopped the media from ramping up the ‘hate crime’ rhetoric even more.