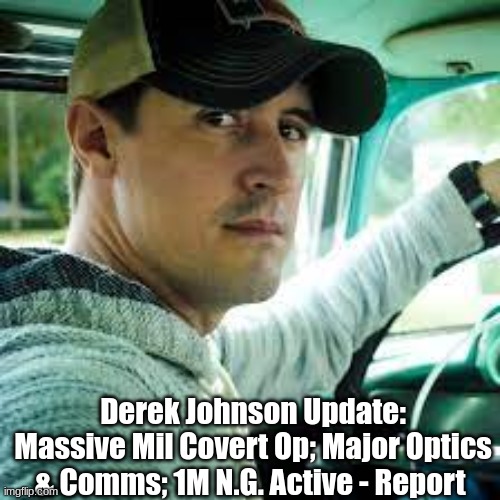 A major update brought to us by Derek:

One… this is Military Operation, a Covert Operation, Military Occupancy as defined in the Law of War Manual. It was published in June 2015, updated in December 2016. Also, the Military Justice Act of 2016, shows the Supreme Court outlining Military Law and Courts is/are separate the Civil Laws and Courts which combined sets the stage for the Laws and Orders put into place from January 20, 2017, to January 20, 2021, the National Guard being Federalized to Active-Duty Status in March 2020 to present day, which all lead to the grand finale Military Tribunals / Commissions (Court Trials) as reported on December 29, 2021, by the New York Times.

Two, the Military Alliance of Generals plugged (planted) Trump where the people could see a visual President (which is a Continuation of Government) in Presidential Form to use and reverse all the fraudulent laws, codes, and statutes, of the Federal Corporation of the District of Columbia that violates the Constitution of the United States of America (the highest Law in the Land) and to dismantle the RINOS of the Federal Corporation.

The Military works on a Chain of Command, Intelligence, and Orders. We are a Nation of Laws and Orders. They work very well when people know how the Government works, it’s our right and our duty.

In 2016, candidate Trump made it very clear what was coming (hindsight 20/20). On the campaign in 2016, “Never again will we voice to the public what we’re doing with the Military… if you find out, guess who else does?”

Plus, it’s a different kind of war as he proclaimed over and over and over. It’s an invisible and hidden enemy not from abroad, but from within.

The Law of War Manual (December 2016) and the Military Justice Act of 2016 are what’s ‘governing’ our Country right now in a Military Occupancy along with our Allies as outlined in the manual.

1. The Alliance of Generals presents to you 2016 candidate Donald John Trump; a Military Plug for Federal Corporation terms: a COG (Continuation of Government).

TWO months before the November 2018 midterm

TWO Years before Covid and the November 2020 Presidential Election???

CIC Trump declared THREE National Emergencies to deal with this threat because Americans had to visually see this in-depth of laws being broken by this hidden and invisible enemy that’s existed long before 2016 and 2020.

Though all part of the Covert Operation and the Military making the Deep State destroy their institution from within but visually to the public, Congress failed to address those which became three breaches of National Security.

Congress, Media, Tech, and all Departments knew about the Law of War Manual and MJA 2016. That’s why it’s important to understand, there’s two ways to simultaneously view this operation. The Military’s working behind the scenes while most Americans are watching the COG (Continuation of Government) in which Congress, Governors, Media, Tech, are under Military Control.

Members of Congress and Government are all under Oaths and NSAs. Yes, again, they know what’s going on. From the beginning, the guilty parties acquired by the Military and Federal agents would have:

Signed full written confessions.
Confessed every crime on video.
Surrendered all assets and wealth.
Allowed social media takeover.
Given a new phone and computer.
Implanted with tracking.
Agreed to 365/24/7 protection.
Are DONE if Trump Team is harmed.
Are DONE if ANY red line is crossed.
Told to play a specific “role.”
Get to go to jail if the entire plan works.
Otherwise, your original sentence happens.

Then they start playing their roles as you have all witnessed in which a few of us can put together in a blueprint form for you. Tired of hearing ‘you’re watching a movie?’ Tough. Because you are. It’s the greatest Military movie of all time.

Franklin D. Roosevelt spoke in front of Congress December 8, 1941, a day after Pearl Harbor and told them if they do not act… it is his responsibility to his country as Commander-in-Chief of the Military to protect the people and deal with the threat.

The Military Intelligence and the JAG Officers standing behind President Trump on January 20, 2017, at the Inauguration sets the tone. The National Guard to Active-Duty Status by the way of 3 National Emergencies unaddressed by Congress in their Legal and Prescribed by Federal Law form set the scene. And the Military Tribunals with a world temporarily governed by the Military Generals until all people see the crimes and evidence displayed to the public according to Law will set the finale.

The Military Alliance used the EO 13848 as a Proclamation to the People as Prescribed by Federal Law to be a visual tool to justify the Federalizing of the National Guard to Active Duty without the portion of lost and blind Americans who do not understand National Security Threats and simplicities of Military and Federal Laws and Orders INSTEAD of a Military Dictatorship Style Takeover in which a portion of society would or could potentially revolt versus seeking unity.

This is a MASSIVE Operation for multiple levels of corruption being cleaned out as well as new systems being implemented and put into place.

You do not activate 1,000,000 National Guard to Active-Duty Status putting those men’s and women’s lives on the line for simply ‘Election Fraud.’

There’s been multiple Optics and Comms from 2016 to present day, but as we approach 2023, where it’s been reported via the New York Times about the Military Tribunals, nothing could have been more epic than CIC Trump’s speech on November 15, 2022, the anniversary of the United States of America’s first Constitution, the Articles of Confederation.

He made keynote drops on November 15 alone with these:

These are just a few of the MAJOR Optics and Comms amongst MANY others that were built up from 2016 to November 15 and 18, 2022, the last dropped thus far.