This fossil is a clue to the history of how dinosaurs dispersed between continents, showing some dinosaurs likely nested in the far north 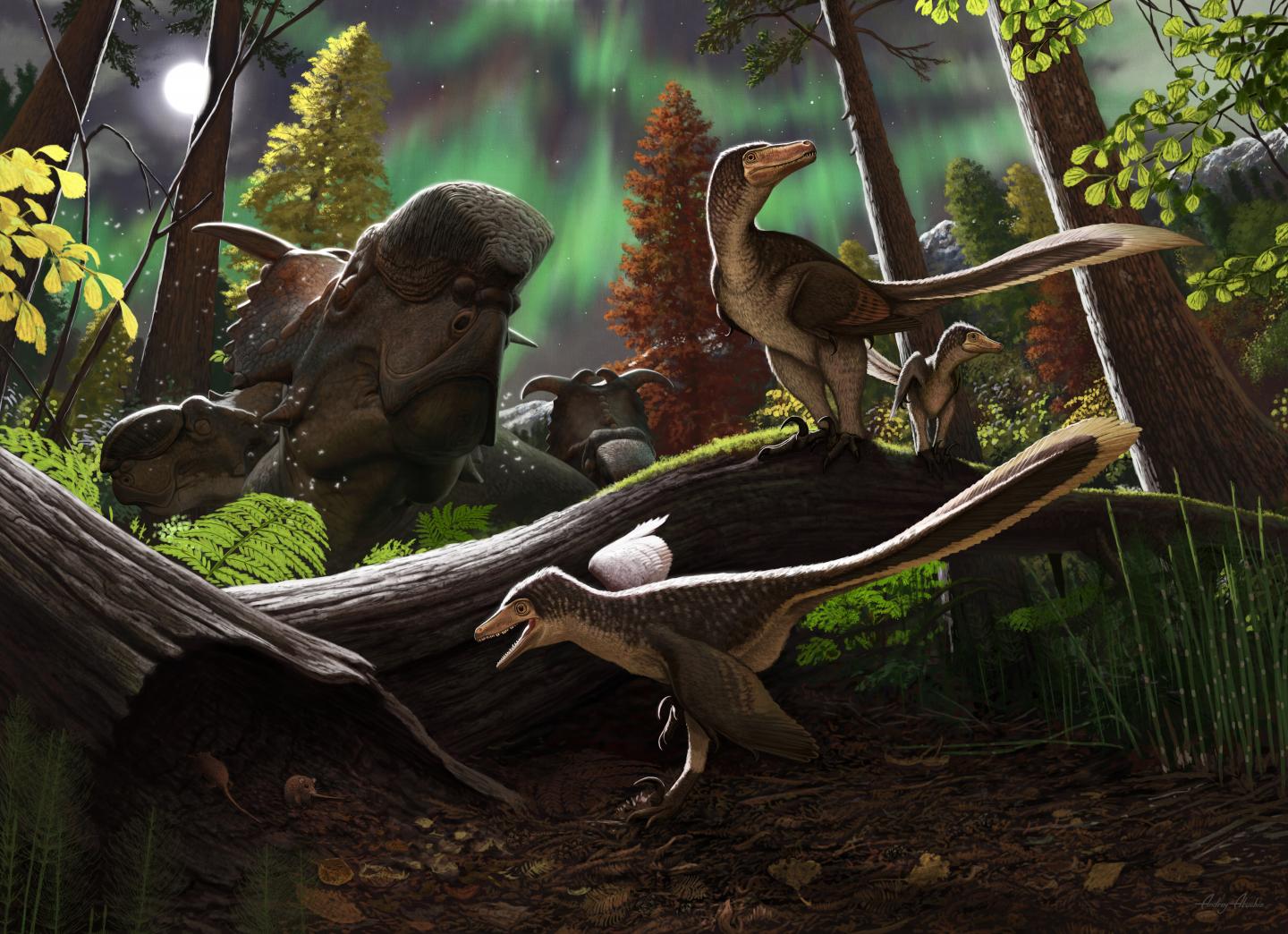 A small piece of fossil jawbone from Alaska represents a rare example of juvenile dromaeosaurid dinosaur remains from the Arctic, according to a study published July 8, 2020 in the open-access journal PLOS ONE by Alfio Alessandro Chiarenza of the Imperial College London, UK, and co-authors Anthony R. Fiorillo, Ronald S. Tykoski, Paul J. McCarthy, Peter P. Flaig, and Dori L. Contreras.

Dromaeosaurids are a group of predatory dinosaurs closely related to birds, whose members include well-known species such as Deinonychus and Velociraptor. These dinosaurs lived all over the world, but their bones are often small and delicate and rarely preserve well in the fossil record, complicating efforts to understand the paths they took as they dispersed between continents.

The Prince Creek Formation of northern Alaska preserves the largest collection of polar dinosaur fossils in the world, dating to about 70 million years ago, but the only dromaeosaurid remains found so far have been isolated teeth. The jaw fossil described in this study is a mere 14mm long and preserves only the tip of the lower jaw, but it is the first known non-dental dromaeosaurid fossil from the Arctic. Statistical analysis indicates this bone belongs to a close relative of the North American Saurornitholestes. 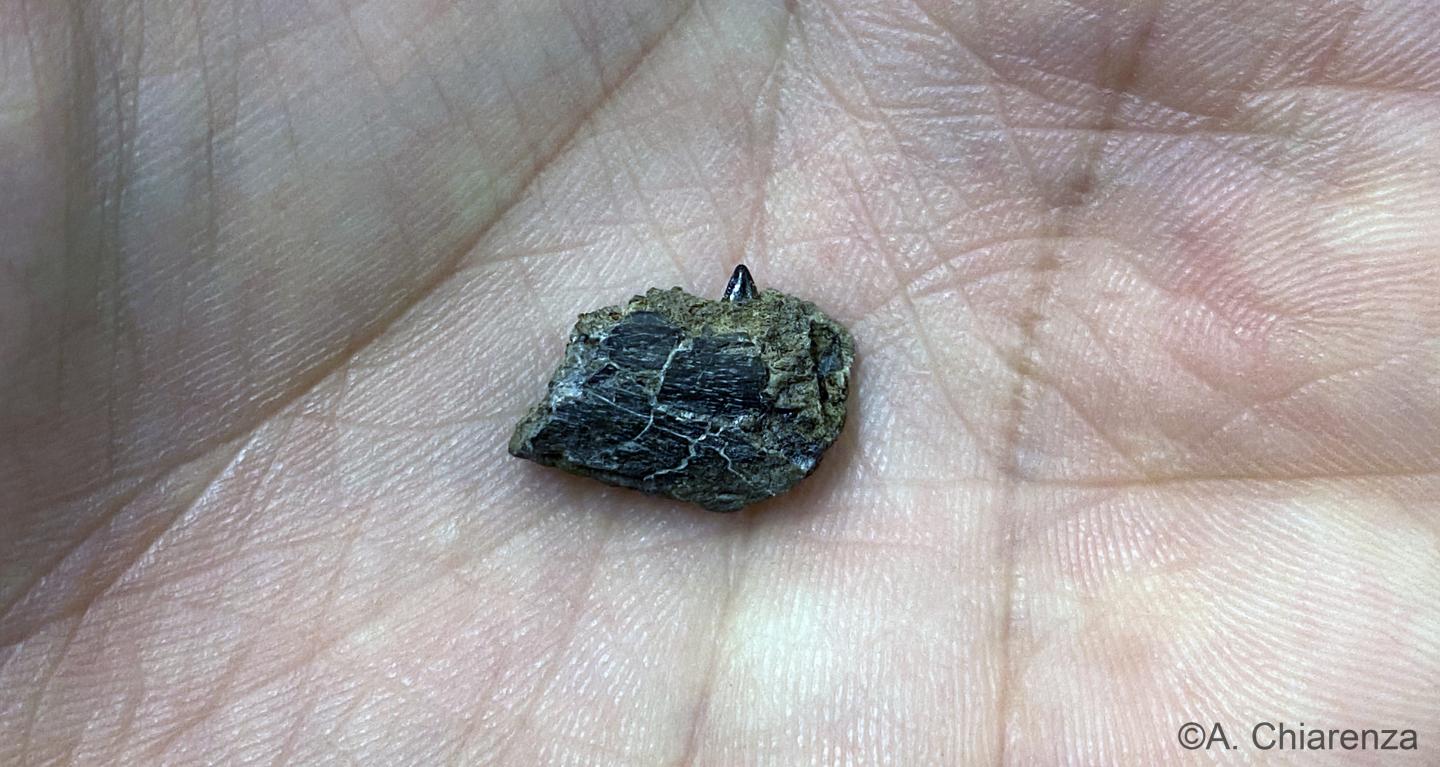 North American dromaeosaurids are thought to trace their origins to Asia, and Alaska would have been a key region for the dispersal of their ancestors. This new fossil is a tantalizing clue toward understanding what kinds of dromaeosaurs inhabited this crucial region. Furthermore, the early developmental stage of the bone suggests this individual was still young and was likely born nearby; in contrast to previous suggestions that this part of Alaska was exclusively a migratory pathway for many dinosaurs, this is strong evidence that some dinosaurs were nesting here. The authors suggest that future findings may allow a more complete understanding of these mysterious Arctic dromaeosaurids.

Chiarenza summarizes: “There are places where dinosaur fossils are so common that a scrap of bone, in most cases, cannot really add anything scientifically informative anymore: this is not the case with this Alaskan specimen. Even with such an incomplete jaw fragment, our team was not only able to work out the evolutionary relationships of this dinosaur, but also to picture something more on the biology of these animals, ultimately gaining more information on this Ancient Arctic ecosystem.”

Fiorillo adds: “Years ago when dinosaurs were first found in the far north, the idea challenged what we think we know about dinosaurs. For some time afterwards, there was a great debate as to whether or not those Arctic dinosaurs migrated or lived in the north year round. All of those arguments were somewhat speculative in nature. This study of a predatory dinosaur jaw from a baby provides the first physical proof that at least some dinosaurs not only lived in the far north, but they thrived there. One might even say, our study shows that the ancient north was a great place to raise a family and now we have to figure out why.”

Funding: ARF received funding for this project from the National Science Foundation (OPP 0424594 to Fiorillo) and the National Geographic Society (W221-12 to Fiorillo). ARF received additional funding through the Perot PaleoClub, a private donation. The Perot Paleo Club played no role in the study design, data collection and analysis, decision to publish, or preparation of the manuscript.

Competing Interests: The authors have declared that no competing interests exist.