Inspired by his own butterfly garden at home, a Florida Atlantic University neuroscientist got a unique look at how monarch butterfly (Danaus plexippus) caterpillars behave when food is scarce. The results look something like a combination of boxing and “bumper” cars. With less access to their favorite food – milkweed – they go from docile to domineering, aggressively head-butting, lunging and knocking aside other caterpillars to ensure their own survival. And, they are most aggressive right before the final stages of their metamorphosis

A lack of nutrition during larval stages has been shown to delay larval development as well as reduce adult body size, reproductive performance and lifespan.The less food, the more likely caterpillars were to try to head-butt each other out of the way to get their fill, lunging and knocking aside other caterpillars to ensure their own survival. And, they are most aggressive right before the final stages of their metamorphosis. 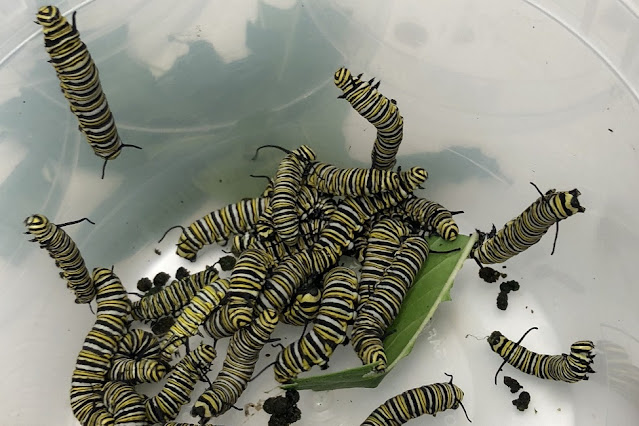 “Aggression is common in insects, including fruit flies, where single-pheromone receptors or single genes have been shown to trigger their aggression,” said Alex Keene, Ph.D., lead author and a professor of biological sciences, FAU’s Charles E. Schmidt College of Science. “I decided to investigate monarch caterpillars because I was intrigued by their combative behavior, which I observed first-hand in my own garden. They are large and easily recognizable compared to many other insects. These are charismatic animals that everyone loves, and there’s a growing appreciation for their potential to tell us about how the brain controls behavior.”

For the study, published in the journal iScience, researchers faced a number of challenges maintaining a population of monarchs while trying to model resource limitation. To encounter these challenges, Keene and his team built an open milkweed garden behind their Boca Raton-based lab and let nature do the work of collecting caterpillars. Back in the lab, the researchers placed caterpillars into groups with different amounts of milkweed. The results were clear – the less food, the more likely caterpillars were to try to head-butt each other out of the way to get their fill.

The process of getting to that result also was challenging. The researchers had difficulty breeding the monarchs in the lab, and found that almost every nursery sells their milkweed with pesticides. That’s why they ended up growing their own milkweed.

To examine whether caterpillars display aggressive behavior, Keene and collaborators quantified the presence of aggressive lunges under a number of conditions, as well as the effect of attacks on target conspecifics. Monarch caterpillars predominantly feed on milkweed and often strip entire plants bare of leaves over a two-week period. In many locations, milkweed is only available for part of the year, placing a significant constraint on monarch development. Monarchs also impact the milkweed plants they consume – at their largest and hungriest phase, a single caterpillar may devour an entire milkweed leaf in under five minutes.

“If you compare a monarch caterpillar to a fruit fly where there are lot of larvae on one piece of rotting fruit, you’ll find that they feed socially with little evidence of territoriality,” said Keene. “But each of these caterpillars will at some point in their developmental cycle encounter resource limitation because they can strip an entire milkweed of leaves.”

Credit: Florida Atlantic University
While observing the caterpillars, researchers noticed that the monarch’s tentacles, large mechanosensory appendages, were not utilized when they were being combative. This finding suggests that alternative sensory modalities, such as pheromonal, olfactory or tactile cues that are independent of the tentacles initiate aggression. The researchers believe that aggression induced by limited food availability in monarch caterpillars are likely present in many different species throughout the animal kingdom.

“While our research showed that the caterpillars respond aggressively to limited food, we still hope to learn more about what drives this response in their brains, which is important for learning more about how these responses work outside the lab,” said Keene. “One of the fundamental problems with work like this is that we’re testing animals in a very derived setting. And that’s not what brains evolved to do. So now that we have this invertebrate model in a relatively controlled setting, but doing an ecologically relevant behavior, that becomes important in terms of looking at the mechanism and function of this behavior in more complex organisms.”

Beyond the study of aggression in caterpillars, monarchs present an emerging model for studying the molecular mechanisms underlying behavior and set the stage for future investigations into the neuroethology of aggression in this system.

Study co-authors are Joseph Collie, Odelvys Granela, and Elizabeth B. Brown, Ph.D., all within FAU’s Department of Biological Sciences and the program in neurogenetics.

The research was supported by the National Science Foundation.