The fossilized insect is tiny and its genital capsule, called a pygophore, is roughly the length of a grain of rice. It is remarkable, scientists say, because the bug’s physical characteristics – from the bold banding pattern on its legs to the internal features of its genitalia – are clearly visible and well-preserved. Recovered from the Green River Formation in present-day Colorado, the fossil represents a new genus and species of predatory insects known as assassin bugs.

Recovered from the Green River Formation in present-day Colorado, this fossil represents a new genus and species of predatory insects known as assassin bugs. Researchers named the specimen Aphelicophontes danjuddi. A small beetle was also fossilized with the specimen. 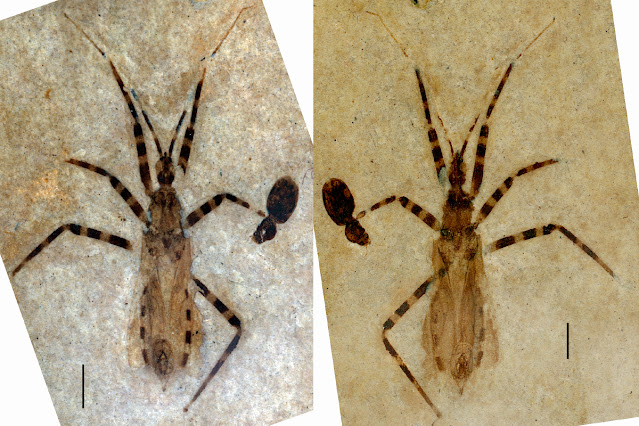 The find is reported in the journal Papers in Palaeontology.

Discovered in 2006 by breaking open a slab of rock, the fossilized bug split almost perfectly from head to abdomen. The fracture also cracked the pygophore in two. A fossil dealer later sold each half to a different collector, and the researchers tracked them down and reunited them for this study.

Being able to see a bug’s genitalia is very helpful when trying to determine a fossil insect’s place in its family tree, said Sam Heads, a paleontologist at the Illinois Natural History Survey and self-described fossil insect-genitalia expert who led the research with Daniel Swanson, a graduate student in entomology at the University of Illinois Urbana-Champaign. 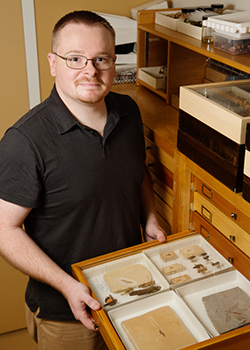 Species are often defined by their ability to successfully mate with one another, and small differences in genitalia can lead to sexual incompatibilities that, over time, may result in the rise of new species, Swanson said. This makes the genitalia a good place to focus to determine an insect species.

But such structures are often obscured in compression fossils like those from the Green River Formation.

“To see these fine structures in the internal genitalia is a rare treat,” Swanson said. “Normally, we only get this level of detail in species that are living today.”

The structures visible within the pygophore include the basal plate, a hardened, stirrup-shaped structure that supports the phallus, he said. The fossil also preserved the contours of the phallotheca, a pouch into which the phallus can be withdrawn.

The find suggests that the banded assassin bugs, a group to which the new specimen is thought to belong, are about 25 million years older than previously thought, Swanson said.

“There are about 7,000 species of assassin bug described, but only about 50 fossils of these bugs are known,” he said. “This just speaks to the improbability of even having a fossil, let alone one of this age, that offers this much information.”

This is not the oldest fossil bug genitalia ever discovered, however.

“The oldest known arthropod genitalia are from a type of bug known as a harvestman that is 400-412 million years old, from the Rhynie Chert of Scotland,” Heads said. “And there are also numerous fossil insects in amber as old as the Cretaceous Period with genitalia preserved.

U. of I. entomology graduate student Daniel Swanson co-led the research on an ancient assassin bug fossil. 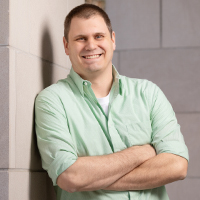 “However, it is almost unheard of for internal male genitalia to be preserved in carbonaceous compressions like ours,” he said.

The researchers named the new assassin bug Aphelicophontes danjuddi. The species name comes from one of the fossil collectors, Dan Judd, who donated his half of the specimen to the INHS for study.

The INHS is a division of the Prairie Research Institute at the U. of I.

Contacts and sources:
Diana Yates
University of Illinois at Urbana-Champaign