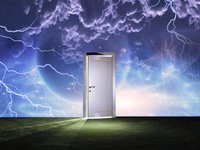 The creator made light & it became so bright that it fell upon the Earth illuminating beauty which commanded the power of fire into the hands of man. The seven stars of the Pleiades constellation are thought to also be the first form of travel, at light speed, from Heaven onto our world. Humans have decided names and spirits of everything here but, light was always the first key- the first way to unlock mystery, void and darkness.

Step into another dimension while you are dreaming and you naturally cross the threshold of the physical realm into the spiritual one; as we are in union with the ether of immortality, in the form of it’s essence and signature, heat waves spiraling onto the plains of our existence as we astral travel from our reality to the next. Some who do astral travel will hear bells, like one could hear ringing at the doors of a church or temple, when it is time that they be opened.

The time is the key, the code, the pattern, the number which will unlock a subconscious doorway or portal for astral travel. Much like looking at the moon light will naturally summon up your dreams and sleepiness because we are illuminated by the authority of oneness, wholeness, opening, closing, going, being and breathing until we transmit into endless wavelengths of energy information and records forever.

To see a door in your dream represents several things. It is important to take notice of the simple shapes and details of the sky, and colors, emotions and anything else that you are experiencing, in order to retain the connection in the waking world. For example, if the door is closed- it would represent the barriers which keep you from living your dreams, desires, wishes and everything else.

If the door is wide open- it would mean that God, goddesses or any higher shape & power has endlessly lit your path in love before you have even gone through. It can also mean that life is what you choose it. If you have to knock on the door- it may indicate a need to be more proactive in your choices and decisions, which shape a part of who we are spiritually and in this realm as well.

To dream of any door is an indicator that you are close to a spiritual portal, which is a paranormal door or pathway which is opened like a candle flame to the spirit worlds. It could have been opened by a ritual, by accident, by quija boards, or any supernatural object or stone which could attract similar types of frequency in range. 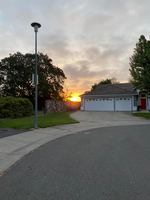 The color of the door will represent which frequency that you are stepping into, and the tones and hues which will make up the spiritual environment, which can exist in the spiritual and physical, emotional and intellectual planes, all at once in a harmonic union. These tools are cutting and shaping pathways, like an obsidian knife for example, which was frequently found in ancient Mayan and Aztec, and similar places in ancient history- was not meant as a weapon as some may think- but, to cut our spiritual doorways underground- which is where many in that time believed that the underworld existed.

In my past life dreams, I have recalled several doorways to the afterlife. In the one life, I was sacrificed in a sunflower field, by a gold four sided pyramid, in which my head was cut off at the top, but which spiraled into a large portal and doorway in the sky, where my soul ascended into with the sun. Then, in another dream that I had, A star would come to me through a large stone tower window with a spiral staircase. It was a silver place. In another one, I was drowned in an English countryside marsh by druid people at night and I was faced down- when the morning time came, my body flipped under and the water lillies did too and I was in another spirit world.

We can channel information through spiritual doorways very easily. That is our first instinct, is to move together as one unit, under the eyes of the Gods and Angels, so that we all may carry the weights and open the gates of the afterlife together- whether the design that many religions and cultures have left behind are still standing, or have been deserted in ruin, we may never know- as like when we dream, when we cross from this life to the next- their are many pathways, many doors and many maps to whichever destination that you would choose.

Your heart is the key to love

Of the highest form of good

Trust yourself and the hands

That formed you because

It is by desire

That we are alive