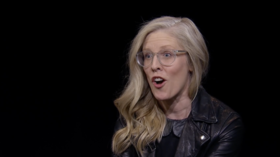 An NBC reporter has bragged about doxxing Trump supporters, “anti-vaxxers,” and other societal rejects, one self-described victim has revealed, suggesting the aim is to turn the US’ national security apparatus against her targets.

Brandy Zadrozny, an NBC feature reporter who specializes in ‘disinformation’ and ‘extremism’ on the internet, is teaching the world how she digs up data on her targets – from phone numbers and home addresses to property records and even Amazon wishlists – to expose their real-life identities. She recently shared her doxxing methods in an online textbook hosted by DataJournalism.com.

But while this might sound like standard journalism practice, Zadrozny’s targets – who have recently included anonymous Trump supporters on Twitter – are private citizens who have committed no crimes, and exposing their real-life identities for allegedly posting “disinformation” is a not-so-subtle effort to turn them into enemies of the state, one such recent target, Revolver News reporter Darren Beattie, told Fox News’ Tucker Carlson on Wednesday.

Beattie revealed that Zadrozny’s “doxxing handbook” is sponsored in part by Bellingcat, the notoriously partisan ‘open-source intelligence’ outfit that, in turn, is backed by the US’ National Endowment for Democracy. It’s also funded by Google, a military contractor in its own right, and the European Journalism Centre, which counts such oligarchic bogeymen as George Soros and Bill Gates among its financial backers. So much muscle behind the doyenne of doxxing would be enough to give anyone who’s ever tweeted “wrongthink” pause, especially when her how-to guide describes how she has “identified people by connecting photos of things like cars, homes, or pets” in addition to profile photos.

Calling the institutionally sanctioned outing “disgusting and disgraceful, even by modern journalism standards,” Beattie described the work of Zadrozny and her ilk as that of “a neo-Stasi” attempting to “crush the rebellion of the American people against their corrupt ruling class,” suggesting her repeated description of anonymous conservatives’ social media posts as “disinformation” was meant to bring down the force of the national security state “to silence Trump supporters domestically.”

The former White House staffer shared screenshots from the textbook on Twitter, revealing the extensive lengths to which Zadrozny went to “out” the Columbia Bugle, which she refers to as a “popular far-right anonymous Twitter account that boasts that it was retweeted twice by Donald Trump’s account.”

Such dogged detective work is one thing when an investigator is hunting a criminal, but quite another when the quarry’s only “crime” is posting political material on social media. And Zadrozny’s targets have been subjected to death threats and suffered real-world harm because of her work.

While Beattie and Carlson both called on NBC to denounce Zadrozny’s abusive tactics, the network responded by defending its employee, calling her an “incredible and meticulous reporter” whom they were “proud to call … our colleague.” Other colleagues stepped up to defend her and attack her accusers, painting the Fox News segment as a preemptive strike against an article Zadrozny was working on about Beattie’s site.

Trained by oligarch-funded journalism outfit the Poynter Institute, Zadrozny shot to journalistic stardom in the past few years, making her name hyping Russiagate, denouncing pedophile hunters, and shutting down Facebook communities in which parents of autistic children swap tips about healing what they believe are vaccine injuries. The unifying thread running through her work, other than a fanatical devotion to pro-establishment narratives, has been reliance on social media deep-dives to learn more about her subjects without having to actually, well, interview them.