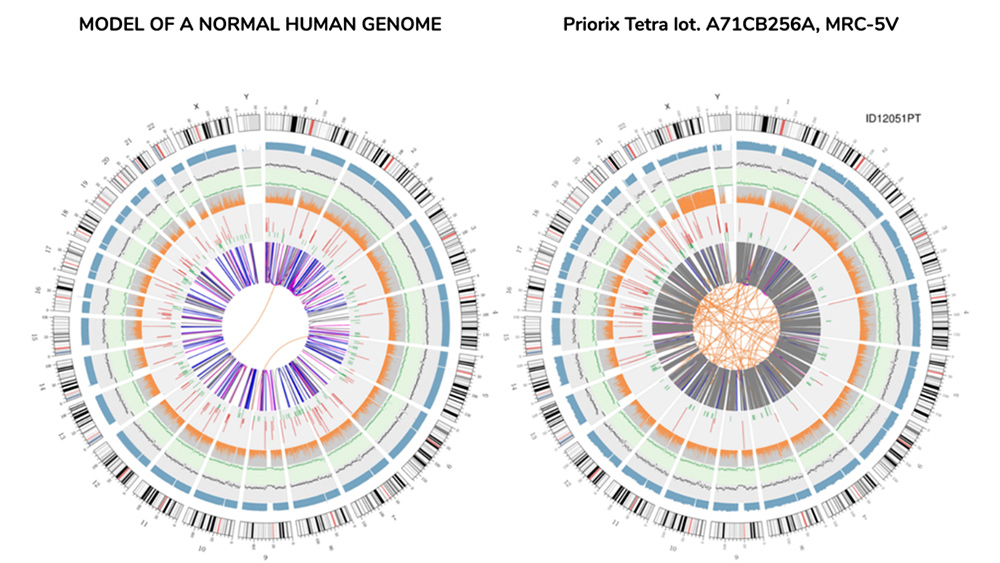 Vaccines are routinely formulated with aborted human fetal cells known as MRC-5 and WI-38. The CDC openly lists some of the vaccines that use these “human diploid” cells, including Twinrix (Hep A / Hep B), ProQuad (MMRV) and Varivax (Varicella / chicken pox). FDA-published vaccine insert sheets such as this one for Varivax also openly admit to the use of aborted human fetal cell lines such as MRC-5:

The product also contains residual components of MRC-5 cells including DNA and protein and trace quantities of neomycin and bovine calf serum from MRC-5 culture media.

Even this GlaxoSmithKline vaccine insert sheet openly discusses the use of aborted human fetal cells in its Priorix-Tetra vaccine (MMRV):

Each virus strain is separately produced in either chick embryo cells (mumps and measles) or MRC5 human diploid cells (rubella and varicella).

Yet, amazingly, almost no member of the public is aware that aborted human fetal cells are routinely used in vaccines. The lying fake news media insists such talk is a “conspiracy theory,” even as the CDC, FDA and vaccine manufacturers openly declare the ingredient is being used in numerous vaccines. (See Vaccines.news for daily coverage of breaking news on vaccines.)

Now, a laboratory in Italy has carried out a complete genome sequencing of this MRC-5 cell line that’s deliberately inserted into multiple vaccines. What they’ve found in beyond shocking… it’s horrifying. As explained by Children’s Health Defense:

The Corvelva team summarized their findings as follows:

1- The fetal cell line was found to belong to a male fetus.

2- The cell line presents itself in such a way that it is likely to be very old, thus consistent with the declared line of the 1960s.

3- The fetal human DNA represented in this vaccine is a complete individual genome, that is, the genomic DNA of all the chromosomes of an individual is present in the vaccine.

4- The human genomic DNA contained in this vaccine is clearly, undoubtedly abnormal, presenting important inconsistencies with a typical human genome, that is, with that of a healthy individual.

5- 560 genes known to be associated with forms of cancer were tested and all underwent major modifications.

6- There are variations whose consequences are not even known, not yet appearing in the literature, but which still affect genes involved in the induction of human cancer.

7- What is also clearly abnormal is the genome excess showing changes in the number of copies and structural variants.

560 cancer genes, abnormal DNA, genetic “modification” of potentially hazardous genes, yet mandated to be injected into every child

What’s clear from this genetic sequencing is that the vaccine industry is inoculating children with engineered cancer. As CHD explains, the vaccines are deliberately formulated with cancer-causing genes which have been specifically modified to promote cancer tumors:

…[T]he DNA contained in these vaccines is potentially TUMORIGENIC and that the guidelines to which the supervisory bodies are appealing are NOT ADEQUATE. Moreover, we are publicly denouncing a SERIOUS OMISSION in taking those PRECAUTIONAL measures which, on the other hand, are urgently requested for antacid drugs.

Not only is this cancer-ridden genetic code inserted into all these vaccines given to children, but the dose of the cancer-infected DNA is dangerously high. As CHD explains:

…[T]he contaminant fetal DNA present in all samples analyzed in varying quantities (thus uncontrolled) is up to 300 times higher than the limit imposed by the EMA for carcinogenic DNA (10 ng/dose, corresponding to DNA contained in approximately 1000 tumor cells, derived from a statistical calculation, while the precautionary limit is 10 pg/dose), a limit that must also be applied to MRC-5 fetal DNA which inevitably contaminates Priorix tetra.

The genome sequencing also found that hundreds of genes linked to cancer tumors have been modified. As explained by the study authors:

…[I]mportant modifications of genes known to be associated with various tumor forms have been identified, for all the 560 verified genes; furthermore, there are variants whose consequences are not known, but which, however, affects genes involved in the induction of human cancer.

This indicates that the MRC-5 aborted human fetal cells appear to have been deliberately modified to make them more tumorigenic… i.e. more likely to cause cancer tumors in human recipients of the vaccine injections.

This would, of course, ensure long-term revenues from the cancer drugs that are also manufactured and sold by the same pharmaceutical giants that manufacture and market vaccines. Repeat business, after all, is a very lucrative business model, and if you can lace vaccines with the genetic blueprints for long-term cancer, you can make sure that a very high percentage of today’s children are eventually diagnosed with cancer, after which they become lucrative customers for Big Pharma’s cancer drugs.

The genome sequencing of the MRC-5 “human diploid” cells used in vaccines is even described by researchers as, “anomalous” when compared to a healthy human being. From the study’s conclusion:

The human genomic DNA contained in the Priorix lot vaccine. n. A71CB256A is evidently anomalous, presenting important inconsistencies if compared to a typical human genome, i.e. the one of a healthy human being. There are several unknown variants (not noted in public databases) and some of them are located in genes involved in cancer. What is also apparently anomalous, is the excess of genome that shows changes in the number of copies (CNV) and structural variants (SV), such as translocations, insertions, deletions, duplications and inversions, many of which involve genes.

This conclusion appears to confirm that MRC-5 cell lines used in vaccines have been genetically modified to make them more likely to cause cancer in vaccine recipients. Subsequently, vaccine mandates are actually forcing children to be injected with cancer genes so that they become future customers of Big Pharma’s for-profit cancer treatment “solutions” which are incredibly toxic to human health.

Human children, in other words, are being injected with the genetically modified DNA of another aborted human child in order to cause cancer on a nationwide scale, all to benefit the bottom line of the pharmaceutical industry that pushes total censorship about any criticism of vaccines or vaccine ingredients.

“Defective” vaccines that are “potentially dangerous to human health”

The upshot is that these vaccines which are deliberately contaminated with abnormal, cancer-infested human genes are “defective,” according to an analysis by CHD:

As a consequence, this vaccine should be considered defective and potentially dangerous to human health, in particular to the pediatric population which is much more vulnerable to genetic and autoimmune damage.

Here’s a summary of these findings, in a short video that will be expanded next week into a full lecture.

Loading...
"Not by might, nor by power, but by my spirit, saith the Lord of hosts." Zechariah 4:6
BEFORE IT'S NEWS ON TELEGRAM
GET THE TELEGRAM APP - https://telegram.org/ JOIN OUR CHANNEL - https://t.me/BeforeitsNews
Read it..
BEFORE IT'S NEWS
SIGN UP FOR OUR NEWSLETTER
Today's Top Stories
Jerome Corsi: Trump Wins! 100% Certain - Brace for the End Game
Situation Update – Nov. 30th – Is Joe Biden Preparing to Concede? Rumors Emerge of Biden Seeking Pardon Deal From Trump
Mike Adams: Situation Update – Nov. 30th – Is Joe Biden Preparing to Concede? Rumors Emerge of Biden Seeking Pardon Deal from Trump!
X22Report: A Deep Dark World Is Being Exposed, Public Awareness Kills All Protections! - Must Video
What If I Told You... Something is Coming Nobody Could Have Possibly Predicted.. Tyranny Emerges! via FL Maquis
Patriots Lost Their Lives in the Server Raid! Huge Revelations From Sidney Powell Filing! Gen Flynn Speaks! - Must Video
High Level Arrests & Detainment Have Begun! Be Ready for Craziness! - Must Video
New David Icke: There Is No Virus! The Latest Proof! - A Must Video
Chemical Compounds in These Foods Can Inhibit a Key SARS-CoV-2 Enzyme
Largest Aggregation of Fishes in Abyssal Deep Sea Recorded
Loading...
Featured
Big Rebounds for Gold, Silver But Bulls Have More Work to Do! Gold Has Room to Push to $1,900 But a Recovery is Premature - ANG Traders
Trump Wins PA!! Biden In Serious Trouble (Think Ankle Monitor)!! Deepstate Is Falling And The War Is Here!! (Must Video)
We Are in the Throes of a Coup Attempt in the US! Voting Fraud is Being Exposed Everywhere! - Must Video
ZetaTalk Newsletter as of December 6, 2020
The Momentum Is Shifting! Deep State Panic At All Time High! Big Booms Coming! - A Must See Video!
Jerome Corsi: Donald Trump Always Looks Like He's Going to Lose Just Before He Wins
Peter Schiff: Foreign Share of US Debt Plunging; Fed Picking Up the Slack
Lt. General Michael Flynn's, Lt. General McInerney and Mary Fanning via Worldviewreport
The Crown Corporation Coup! - Sean Stone - Great SGT Report Video
Politicians Warn: Vaccines Can Be FORCED On People
Loading...
Top Global
TERROR IN GERMANY: BABY GIRL MURDERED, SEVERAL people DEAD, Many Injured After Car Ploughs Through Pedestrians at Christmas Market
Vaccine Bribes & The Pagan Roots Of "Pandemic"
Glaring similarities Between Covid 19 and 9/11
Shoot down (Dec 01,20) Russian Su-27 jets intercept US RC-135 aircraft Amid Sends Missile
America’s Future Is Liberal Fascism Sporting a Smiley Shirt and Armed With a Syringe
Satan Claus Promises A Fourth Reich Industrial Revolution & Worldwide Tyranny Instead. The Great Reset Wasn’t On Anyone’s Christmas List! The Second Wave Was Brought On By People Wearing Masks! Coincidence? Great Video By Dollar Vigilante!
The Astronomical Cost of Lockdown
The swine flu vaccine was rushed into use in the UK in 2009/10 after minimal clinical trials and given to children and adults
Why Are Five Continents Below Normal Temperature in May (975)
Retired 3-Star General McInerney Calls for President Trump to Invoke Insurrection Act, Suspend Habeas Corpus, Declare Martial Law and Initiate Mass Arrests Under Military Authority
Loading...
Top Alternative
Prophecy: Countdown: "Armageddon In Holy Land"
Gray Man Theory: The Art Of Blending In During Disaster- In the immediate aftermath of a disaster or in a post-apocalyptic scenario, the ability to conceal yourself as a gray man can be an extremely useful survival skill.
Many people are convinced that civilization as we know it will collapse or, at best, experience a prolonged interruption- The Golden Hour: What to Do in the First 60 Minutes of SHTF
Thanking God – R.T. Kendall – Times Square Church – 11.15.2020
UTAH Cryptic Monolith Monument Found on 322nd Day of 2020, Relating it to Georgia's Guidestones! Monolith Discovered In Utah Near MOAB Mysteriously Disappears. SYNCHRONIC Serpent Arrow Through TIME! Great Videos And Decode By Enter The Stars!
Closing The Playbook On Tyranny
TERROR IN GERMANY: BABY GIRL MURDERED, SEVERAL people DEAD, Many Injured After Car Ploughs Through Pedestrians at Christmas Market
UFO Battle In The Sky? Unknown Space Object Making Extremely Slow Flyby - Military Race In Space
The Biggest Political Disaster That No One Is Talking About! Democrats Suffer Decade Long Defeat In This Irreversible Loss Of Power!
Martial Law is Coming Just Like The Days of Hitler . . ( VIDEO)