The concepts children glean from TV can vary widely based on the types of programs they watch, according to the authors, who found a stark divergence between the values conveyed in reality shows and fictional shows.  Values have changed from decade to decade, often reflecting shifts in the broader culture. 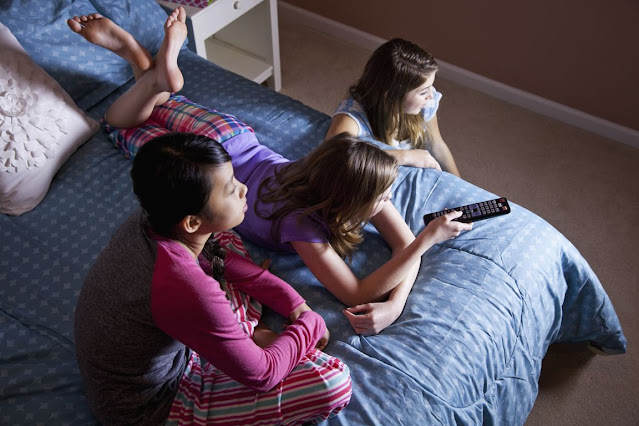 How important is fame? What about self-acceptance? Benevolence? The messages children between the ages of 8 and 12 glean from TV play a significant role in their development, influencing attitudes and behaviors as they grow into their teenage years and beyond, UCLA psychologists say.

Now, a new report by UCLA’s Center for Scholars and Storytellers assesses the values emphasized by television programs popular with tweens over each decade from 1967 to 2017, charting how 16 values have waxed and waned in importance during that 50-year span.

Achievement — being very successful — was ranked first in 2017, with self-acceptance, image, popularity and being part of a community rounding out the top five.

Like fame, values such as community feeling and benevolence have also seen dramatic rises and falls over the past half-century, with their rankings typically echoing changes in the larger culture, the researchers found. 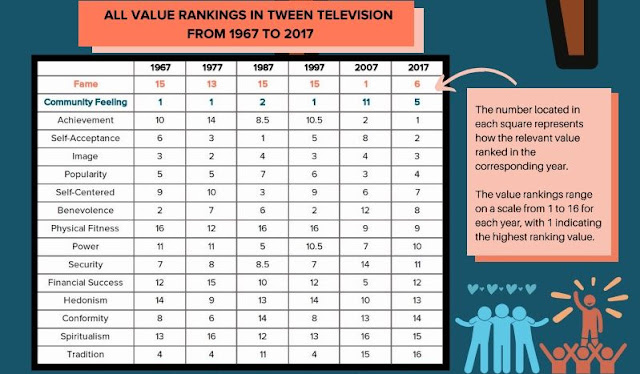 “I believe that television reflects the culture, and this half-century of data shows that American culture has changed drastically,” said report author Yalda Uhls, founder and executive director of the Center for Scholars and Storytellers and an adjunct assistant professor of psychology. “Media plays an important role as young people are developing a concept of the social world outside of their immediate environment.”

The concepts children develop can also vary widely based on what types of programs they’re watching, according to the authors, who found a stark divergence between the values conveyed in reality shows — first evaluated in 2007 — and those of scripted fictional shows.

The most popular tween reality shows in 2017, based on Nielsen ratings, were “America’s Got Talent” and “American Ninja Warrior,” while the top two scripted shows were “Thundermans” and “Girl Meets World.” In the scripted shows, the top values conveyed were self-acceptance, benevolence and being part of a community. In contrast, the top values conveyed in reality shows were fame, image and self-centeredness.

Reality shows, created for a broad audience and watched frequently by tweens, often highlight competition and the importance of being No. 1 and include bullying, cheating and a winning-at-all-costs value system, the authors note. 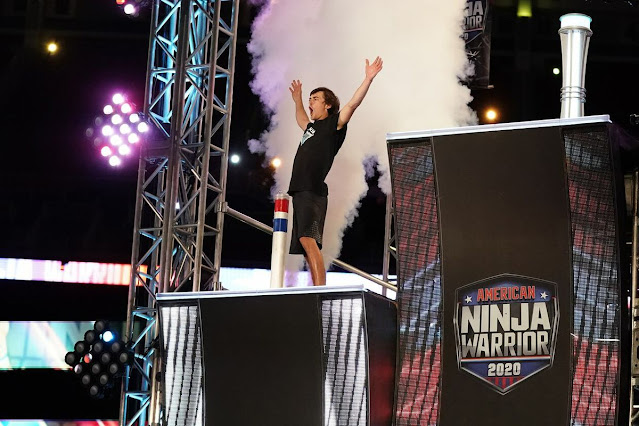 “If tweens watch, admire and identify with people who mostly care about fame and winning, these values may become even more important in our culture,” said the report’s lead author, Agnes Varghese, a fellow of the center and a UC Riverside graduate student. “Reality television shows continued to reflect the same trend we saw in 2007, with self-focused values such as fame ranking highest.”

The authors recommend that parents help children understand that reality shows do not depict the experience of the average person and that fictional shows do not adequately depict the hard work and struggles associated with achieving fame.

TV values and the rise of social media

Uhls believes the explosive growth and popularity of social media platforms such as Facebook, launched in 2004, and YouTube, launched in 2005, may have influenced television content creators in the first decade of the 2000s to make fame-focused tween shows. Other research has shown that social media growth was accompanied by a rise in narcissism and a decrease in empathy among college students in the U.S., she notes.

“I don’t think this is a coincidence,” said Uhls, who was formerly a movie studio executive. “The growth of social media gives children access to an audience beyond the school grounds.”

By 2017, the social media landscape had expanded to include platforms like Snapchat and Instagram, and the access they provided to an ever-widening audience made popularity seem more easily attainable. For that reason, Uhls believes, achieving fame may have become less desirable and unique. In addition, the severe recession of 2007–09 may have shifted the culture away from self-focused values such as fame and getting rich.

Because children, particularly in their tween years, are forming a belief system that integrates the many messages about desirable future aspirations they receive from parents, school, peers and media, it is crucial to understand the role television plays in promoting values — both positive and negative, the researchers say.

The report draws on research, both published and unpublished, by Uhls, Greenfield and former UCLA graduate students Jill Giardino and Caroline Fung.